My Girls: Reflections of a curling dad

Just how challenging is it to be the father of not one, not two, but three high-performance curlers? Ask Doug Kreviazuk of Ottawa, whose daughters Alison, Lynn and Cheryl have been competing together – and against each other – since Little Rocks. “The three girls are all great friends,” Kreviazuk insists. “And while there is some sibling rivalry, it doesn’t usually involve curling. This reality has made it much easier on (wife) Janice and me.” 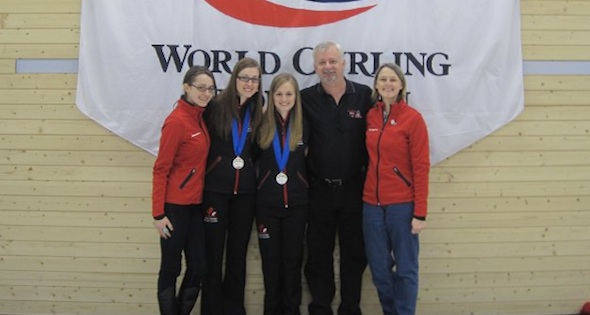 It all started at Ottawa’s City View Curling Club in 1996. That’s when Alison – the sister who won the 2014 Scotties Tournament of Hearts with Rachel Homan’s Team Canada in February, and went on to win the silver medal at the Ford World Women’s Curling Championship in Saint John a month later – began in the Little Rocks program. Little Rocks was actually where Kreviazuk got started in curling as well. No, not as a kid, but as a parent volunteer. Hanging around the club helping his daughters on the ice led to forming a team with some friends and giving it a try himself. Naturally, he was hooked. 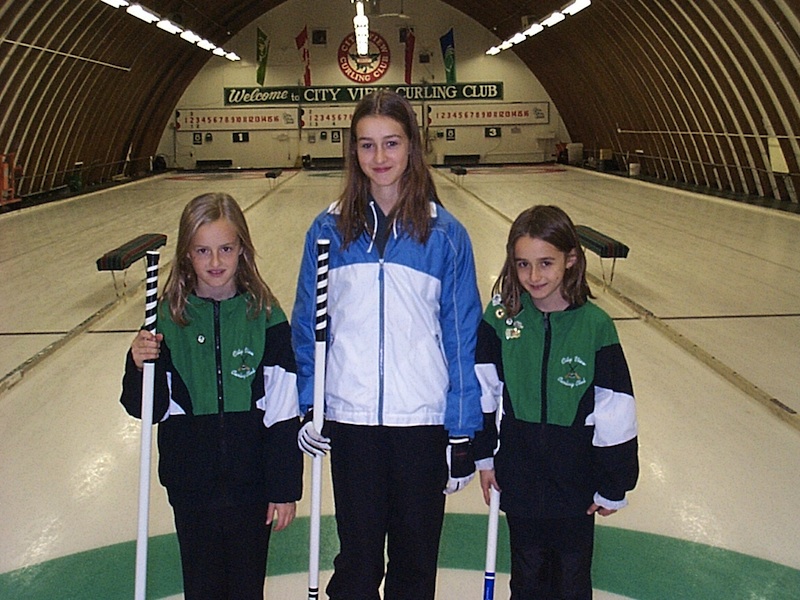 Three young Kreviazuk sisters (Lynn, Alison and Cheryl) pose on the ice at the City View Curling Club in Ottawa, where it all began (Photo courtesy D. Kreviazuk)

“After the first year of working with the Little Rockers, I wanted to learn more so I started taking the coaching courses,” he says. “Over the course of the next several years, I successfully completed my Level 3 certification and coached assorted men’s and women’s teams, mostly at the junior level, including Alison, Lynn and Cheryl.” All three girls caught the curling bug right from the start, says their dad. “The friends, snacks and hot chocolate brought them back each week, and when we started participating in area bonspiels and they experienced competition and early levels of success, they too were hooked,” he says. Three kids, three increasingly demanding curling schedules – how did the Kreviazuks keep up? It helped that Lynn and Cheryl, being only one year apart in age, played on the same team for part of their Bantam and Junior careers. Kreviazuk coached some of these teams, so he was on the scene anyway. By this time, Alison was already playing with Homan, and the parents were heavily involved, assisting coach Earle Morris, holding the broom at practices and, of course, driving to events. But as the girls’ teams succeeded, so did their competition schedule and the demands on the family’s time and resources. “Between the three girls, in or around 2009, Janice and I had racked up 68 personal nights in various hotels, not to mention the travel, food and other entertainment costs,” he says. “I’ve always said that I am on the Freedom 85 program (i.e. retire at 85) but that said, we wouldn’t have done it any differently.” 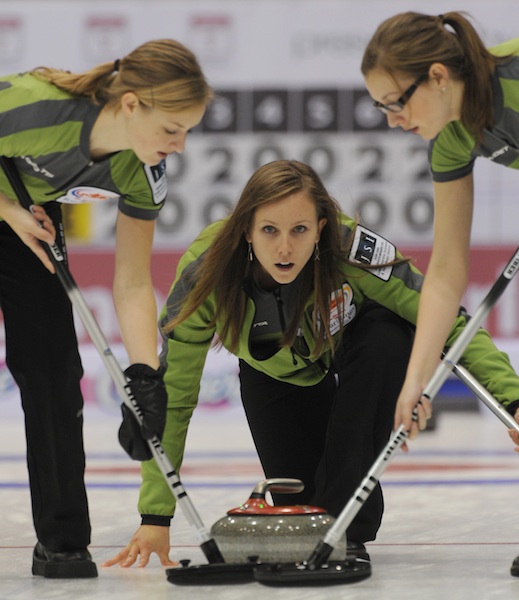 But finding the time, energy and finances to support three competitive athletes in the family isn’t the only challenge. There’s the emotional side of watching your children compete against each other, too. And when you’re coaching two sisters on one team as they play against the other sister on another, you might think sibling rivalry might finally turn ugly. Not so, says Kreviazuk, who remembers a provincial Regional final between Lynn and Cheryl on one team, playing Alison (with Homan) on another. When younger sister Lynn stole the win, she didn’t celebrate. “On the ride home, Lynn was inconsolable,” says her dad. “So upset that Alison hadn’t won the game.” Alison was upset too, he says, but as for the youngest of the three: “Cheryl was thrilled to have won.” An even more dramatic moment came at the end of the 2011 Junior Women’s Provincial final in Sarnia between Lynn (playing for Clancy Grandy) and Cheryl (with Jasmine Thurston). “One would be going on to Nationals, and the other was going home,” remembers Kreviazuk. “In the extra end, Lynn’s team did not have to throw its last rock. Instead of celebrating her victory with her team, Lynn ran down the ice, meeting Cheryl half way where they shared hugs and tears for a couple of minutes.” There have been other tough times in the girls’ curling careers as well, says their dad. The Homan team’s loss to Tracy Horgan in the 2012 Ontario provincial Scotties final, and the recent loss at the 2014 world championship come to mind, not to mention the recent announcement that Alison is leaving not only the team, but Canada as well – moving to Sweden to be with boyfriend Fredrik Lindberg. “After these losses, I remind the girls that each of them have attained the highest levels of performance within their sport,” says Kreviazuk the coach. “So when they suffer a key loss, the resulting pain they feel is something few will ever feel. Remember the pain, how it feels and how you never want to feel that way again; this will drive them toward even more success in the future.” But Kreviazuk the dad is quick to share the big picture as well when times are tough. “This is when family and friends really pull together and we rely on them for comfort and non-judgmental support,” he says. “Providing unconditional support both on and off the ice is key to our relationship with the girls.” 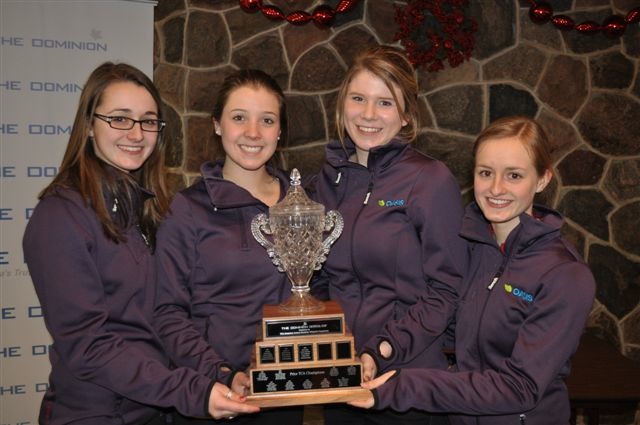 Changes are afoot for the Kreviazuk girls next season. Alison will be in Sweden, a change that her dad admits will be difficult for her parents (“Children always grow up and move on, but Sweden isn’t just around the corner”). Lynn will continue with Team Flaxey and try to repeat as Ontario champion, but she’s also preparing for the World University Games as a member of Carleton University’s team skipped by Jamie Sinclair, and there are coaching opportunities on the horizon as well. Cheryl, who has graduated from junior women’s and has joined a new women’s team, is also looking ahead to a future in competitive curling. And like her dad and sisters, the youngest Kreviazuk knows that the big picture is all about the people in the sport, especially family. “I owe so much of my success to my parents, all the coaches I’ve had the pleasure of working with, the teammates I’ve laughed and cried with, and last but not least, my sisters,” Cheryl says. “Although we’ve had our ups and downs, we still only want the best for one another.” Her dad couldn’t agree more. “Each year we reflect on the season past and say, ‘It just can’t get better.’ But it does, and we have a front row seat,” he says. “Janice and I are just so fortunate to be part of this ride.” 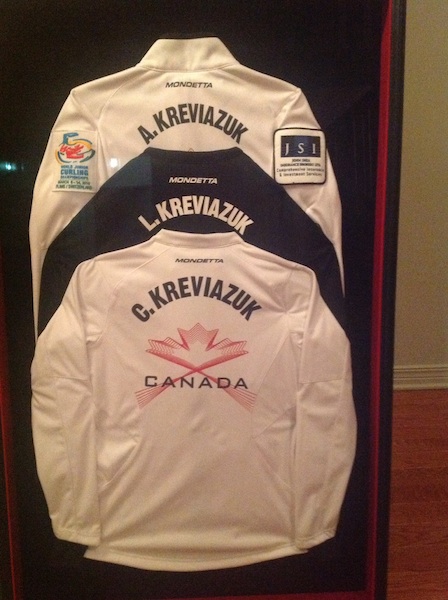