Three more medal opportunities will be on the line when Canadian teams open play on Wednesday at the 2014 World Senior Men’s, Senior Women’s and Mixed Doubles Championships at the Dumfries Ice Bowl in Dumfries, Scotland. 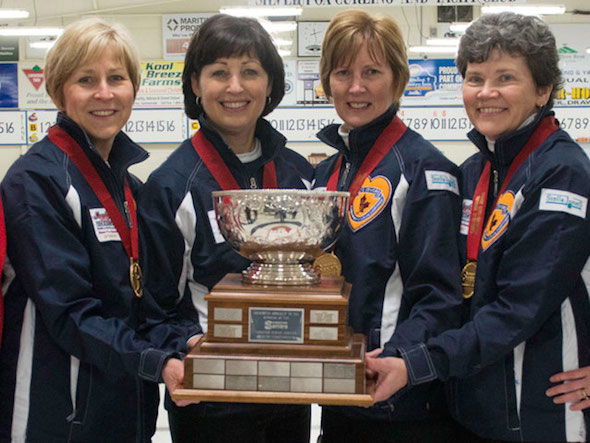 The Canadian entries will be looking to defend the gold medals our country won at the 2013 World Senior Men’s and Women’s Championships in Fredericton, N.B., while our mixed doubles entry will be looking for just our second medal in the seven-year history of the event. In senior women’s play, Colleen Pinkney’s team from Truro, N.S., (third Wendy Currie, second Shelley MacNutt, lead Susan Creelman, alternate Judy Burgess, coach Bill Tschirhart) will be pursuing Canada’s seventh consecutive gold medal, and her second — Pinkney, Currie and Creelman (Karen Hennigar played second) went unbeaten to win gold in 2010 at Chelyabinsk, Russia. Canada has won nine times since the World Seniors were introduced in 2002. 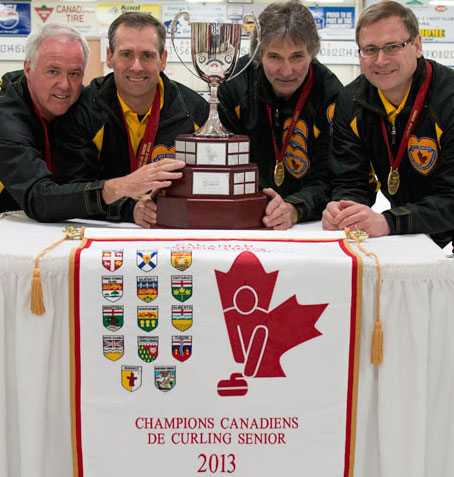 On the men’s side, the Wayne Tallon team from Fredericton (third Mike Kennedy, second Mike Flannery, lead Wade Blanchard, alternate Charles Kingston, coach Bill Tschirhart) will be looking to make it back-to-back gold for Canada, as well as claim Canada’s ninth world senior men’s title. At the 2013 event in Fredericton (which was chaired by Tallon), Rob Armitage of Red Deer, Alta., won the men’s gold medal while Cathy King of Edmonton captured the women’s gold. Both of the Canadian teams at the 2014 World Seniors qualified for the trip to Scotland by winning their respective titles at the 2013 Canadian Senior Men’s and Curling Championships in Summerside, P.E.I. Meanwhile, the husband and wife pairing of Wayne Tuck and Kim Tuck of Ilderton, Ont., will wear Canadian colours in the World Mixed Doubles Championship. The Tucks, who will have Jim Waite with them as team coach, prevailed at the 2014 Canadian Mixed Doubles Trials last month in Ottawa, and will be looking for Canada’s first gold medal at the event, which started in 2008. Only one Canadian team —  Sean Grassie and Allison Nimik — has reached the podium at the World Mixed Doubles as they won bronze in 2009 at Cortina d’Ampezzo, Italy. 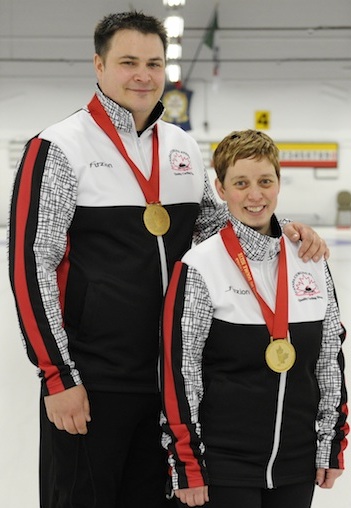 Selected games from the World Mixed Doubles Championship will be streamed live online, including Canada’s opening game against Sweden’s Camilla Johansson and Per Noreen, Thursday at 7 a.m. Eastern. Go to the event website, wmdcc2014.curlingevents.com/, to see the games and broadcast schedule. The round-robin draws for the World Seniors and Mixed Doubles will run through to April 29 before the playoffs get underway. There are 25 senior men’s teams, split into three pools (one nine-team pool, two eight-team pools); 15 senior women’s teams, split into two pools (one eight-team pool, one seven-team pool); and 34 mixed doubles teams split into four pools (two nine-team pools, two eight-team pools). On April 30, the senior men’s and women’s gold-medal and bronze-medal games are scheduled for 7:30 a.m. Eastern, with the mixed doubles gold-medal and bronze-medal games at 10:30 a.m. Eastern. Since the World Mixed Doubles Championship made its debut in 2008 in Vierumäki, Finland, Swiss teams have won four of the six gold medals. Last year in Fredericton, though, Hungary made history with its first international curling victory when the duo of Zsolt Kiss and Dorottya Palancsa beat Sweden in the final. Kiss and Palancsa are back to defend their title in Dumfries. The Canadian entry of Robert Desjardins and Isabelle Néron finished 10th with a 4-4 record. At the World Seniors, Canadian teams have enjoyed great success since the first edition in 2002 at Bismarck, N.D. On the men’s side, Canadian teams have been in all 12 gold-medal games, winning eight of them: Tom Reed in 2003 at Winnipeg; Bas Buckle in 2004 at Gävle, Sweden, and again a year later at Howwood; Les Rogers in 2006 at Copenhagen, Denmark; Pat Ryan in 2008 at Vierumäki; Eugene Hritzuk in 2009 at Dunedin, New Zealand; Mark Johnson in 2011 at St. Paul, Minn.; and Armitage last year. Canadian senior women’s teams have collected nine gold medals — Anne Dunn in 2002 at Bismarck and 2004 at Gävle; Nancy Kerr in 2003 at Winnipeg; Diane Foster in 2008 at Vierumäki; Pat Sanders in 2009 at Dunedin; Pinkney in  2010 at Chelyabinsk, Russia; Christine Jurgenson in 2011 at St. Paul; Heidi Hanlon in 2012 at Tårnby, Denmark; and King last year. For live scores and standings from the World Mixed Doubles Championship, go to: www.wmdcc2014.curlingevents.com/. For live scores and standings from the World Seniors Championship, go to: wscc2014.curlingevents.com/.