Wayne Tallon and his team from Fredericton got off to a strong start on Thursday morning at the 2014 World Senior Curling Championships, defeating France’s Eric Richert 11-2 at the Dumfries Ice Bowl in Dumfries, Scotland. Tallon, backed by his Fredericton, N.B., team of third Mike Kennedy, second Mike Flannery, lead Wade Blanchard, alternate Charles Kingston and coach Bill Tschirhart, gave up a steal of one in the first end, but roared back with four points in the second. The Canadians stole seven more points over the next three ends to lead 11-1 after five. Richert was able to score a single in the sixth, but it was handshakes on a decisive 11-2 Canadian victory. 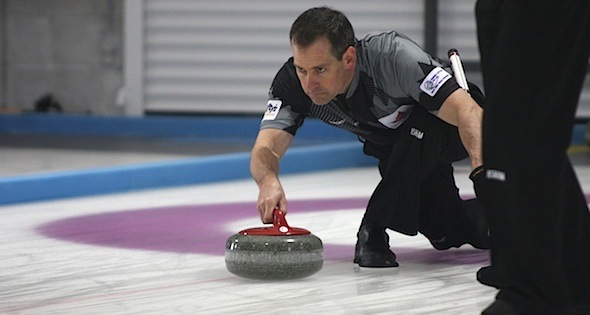 The Canadian men are trying to claim Canada’s ninth world senior men’s title and make it back-to-back gold medals. Rob Armitage and his team from Red Deer, Alta., won the event last year. Canada’s Colleen Pinkney and her team from Truro, N.S., (third Wendy Currie, second Shelley MacNutt, lead Susan Creelman, alternate Judy Burgess and coach Bill Tschirhart) also started with a win, stealing three ends on the way to a 9-2 victory over Scotland’s Christine Cannon. “Well we definitely dodged a couple of bullets there early in the game,” said Pinkney afterwards. “I believe it was a game for both teams to adjust to the ice. I think both teams can curl better than they did tonight. As much as we played quite well, both teams will get better as the week goes on.”

Pinkney is pursuing Canada’s seventh consecutive gold medal, and her second — Pinkney, Currie and Creelman (Karen Hennigar played second) went unbeaten to win gold in 2010 at Chelyabinsk, Russia. In 2013, the title was won by Cathy King of Edmonton.

The round robin continues on Friday with the Canadian men playing Slovakia and Poland, while the women play Italy. The round-robin draws for the World Seniors will run through to April 29 before the playoffs get underway. There are 25 senior men’s teams, split into three pools (one nine-team pool, two eight-team pools); 15 senior women’s teams, split into two pools (one eight-team pool, one seven-team pool). On April 30, the senior men’s and women’s gold-medal and bronze-medal games are scheduled for 7:30 a.m. Eastern. For live scores and standings from the World Seniors Championship, go to: wscc2014.curlingevents.com/.