After an opening day loss to Sweden, Team Canada’s Kim and Wayne Tuck bounced back with a decisive 10-5 win over Latvia on Friday morning at the World Mixed Doubles Curling Championship in Dumfries, Scotland. “You need to have a win very early in this competition,” said Wayne after the game. “In the first game (against Sweden) we had trouble with the ice a little  bit…getting our weight and stuff like that.  This game was a lot better.” Canada took control early, scoring six points in the second end and another three in the fourth to lead 9-3 at the break. The Latvians, Dace and Ansis Regza, gave up a steal in the fifth and were unable to climb back into the game. It was a welcome win for the Canadians, who dropped a close game to Sweden on opening day. Coach Jim Waite, who is in Dumfries with the husband-and-wife team from Ilderton, Ont., reports that the competition is very strong. “There are no slam-dunk easy wins over here,” he said after the loss to Sweden. “The Europeans are much more into this discipline than we are in Canada. There are mixed doubles spiels all across Europe and many of these teams play only this game – not men’s or women’s, just mixed doubles.” 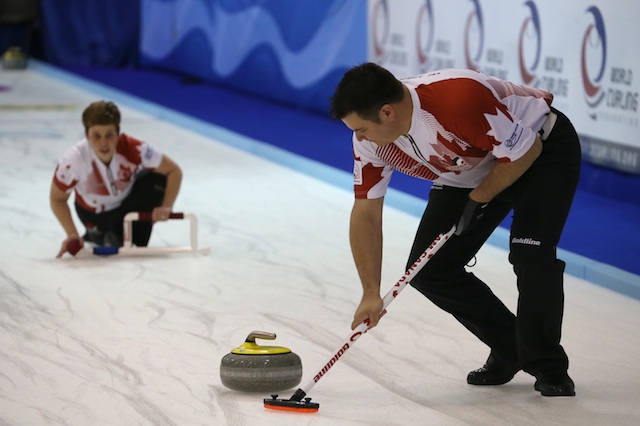 On Saturday, Canada will face Slovenia (Valentina Jurincic and Jure Culic) and Scotland (Gina Aitken and Bruce Mouat). The game against Scotland will be webcast by the World Curling Federation at 4 p.m. ET. Results, statistics, live video streams, news and photos from the World Mixed Doubles Curling Championship 2014 can be seen here on the World Curling Federation’s official event website: https://wmdcc2014.curlingevents.com Curling fans around the world will also be able to see a number of live games and selected highlights from the 2014 World Mixed Doubles Curling Championship via the World Curling Federation’s YouTube Channel www.youtube.com/WorldCurlingTV The full webcast schedule can be found here: https://wmdcc2014.curlingevents.com/schedule At the same time as staging the World Mixed Doubles Championship, the Dumfries Ice Bowl will also act as host to the Men’s and Women’s World Senior Curling Championships. More information about that event can be found here: https://wscc2014.curlingevents.com