Canada’s Wayne and Kim Tuck earned two more wins on Monday to secure a spot in the playoffs at the 2014 World Mixed Doubles Curling Championship in Dumfries, Scotland. The Tucks, backed by coach Jim Waite, faced Kazakhstan’s Olga Ten and Aleksandr Orlov (2-3) in the early game at the Dumfries Ice Bowl. Starting with hammer, the Canadian husband-and-wife team from Ilderton, Ont., scored a single, then went on to steal the next four ends on the way to a 7-5 victory. 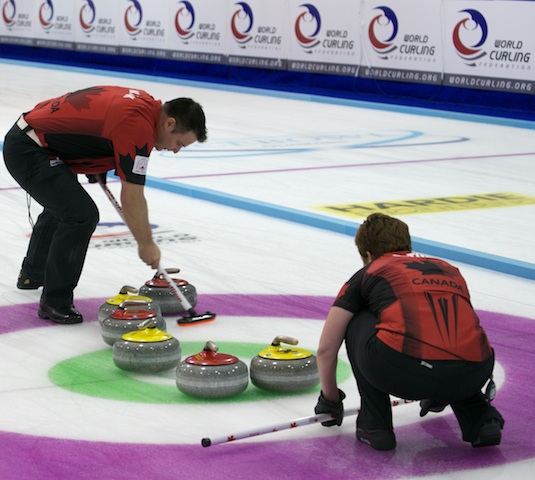 Against Brazil’s Aline Lima and Marcelo Mello (1-4), Canada again controlled play from the first end, scoring four points and stealing another in the second. Lima and Mello, both of whom are part of a Brazilian curling program sending its first team to a World Curling Championship, just couldn’t generate any offence against the Tucks, who are riding a five-game winning streak since dropping their first game of the round robin to Sweden. In their last game of the round robin, Canada plays Finland’s Eszter Johasz and 2006 Olympic Winter Games silver medallist Markku Uusipaavalniemi. Win or lose, the Tucks have qualified for their pool playoff game against Scotland’s Gina Aitken and Bruce Mouat. Sweden’s Camilla Johansson and Per Noreen, 2012 silver medallists, qualify directly to the quarter-finals based on their current first-place pool standing. Results, statistics, live video streams, news and photos from the World Mixed Doubles Curling Championship 2014 can be seen here on the World Curling Federation’s official event website: https://wmdcc2014.curlingevents.com Curling fans around the world will also be able to see a number of live games and selected highlights from the 2014 World Mixed Doubles Curling Championship via the World Curling Federation’s YouTube Channel www.youtube.com/WorldCurlingTV The full webcast schedule can be found here: https://wmdcc2014.curlingevents.com/schedule At the same time as staging the World Mixed Doubles Championship, the Dumfries Ice Bowl will also act as host to the Men’s and Women’s World Senior Curling Championships. More information about that event can be found here: https://wscc2014.curlingevents.com