Ontario and BC lead the way at wheelchair championship

With three draws complete in the round robin at the 2014 Canadian Wheelchair Curling Championship, British Columbia and Ontario remain undefeated at the top of the standings, while defending champion Quebec suffered its first loss to slip to second place in the standings. 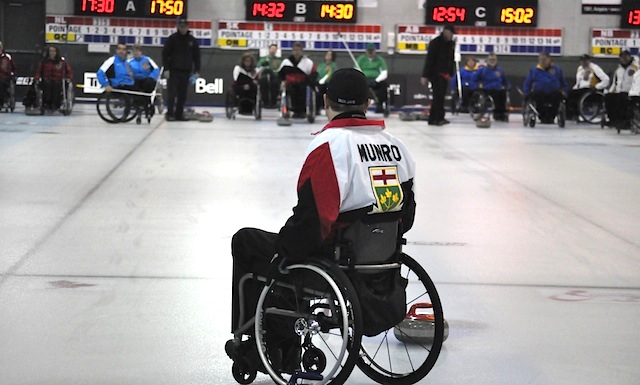 In the morning draw at the Club de curling Boucherville, Quebec’s Benoit Lessard and his team from the Magog Curling Club powered over Joanne MacDonald from St. John’s, N.L., 11-3, scoring four in the first end and stealing another three to take an insurmountable lead.

Dennis Thiessen and his Winnipeg team followed the same route, racking up nine points in the first four ends before Alberta’s Jack Smart was able to get on the board in a 9-2 Manitoba win.

In other games on Monday morning, Saskatchewan’s Darwin Bender lost a close 7-6 contest to Ontario’s Mike Munro; British Columbia’s Darryl Neighbour defeated New Brunswick’s Michael Fitzgerald 9-5, and Nova Scotia’s George Horning stole a point in the final end to defeat Northern Ontario’s Gino Sonego 8-7. On Monday afternoon, British Columbia scored five points in the third end to take control over Saskatchewan, going on to win 8-3. Quebec dropped its first game, struggling against a determined Alberta team that stole four consecutive ends to earn a 7-1 win. And in other Draw 3 action, Nova Scotia squeaked past New Brunswick, 9-8; Ontario overpowered Newfoundland and Labrador, 9-3; and Manitoba dropped a 5-4 decision to Northern Ontario. The round robin continues on Wednesday with games at 10 a.m. and 3 p.m. at the Club de Curling Boucherville. Live streaming of the event is available at https://www.ustream.tv/channel/wcblog2
Draw results and other event information is available at www.curling.ca and www.curling.ca/2014wheelchair-en.
Since the inaugural Canadian championship in 2004, British Columbia has four titles – in 2007 (skip Darryl Neighbour), 2008 and 2009 (skip Jim Armstrong) and 2010 (skip Gary Cormack). Team Canada (skip Chris Dawe) has three victories (2004-2006) while Manitoba (2011) , Saskatchewan (2012) and Quebec (2013) have each won once.