Semifinals for Tallon and Pinkney at World Seniors

Both Wayne Tallon and Colleen Pinkney have qualified for Wednesday’s semifinals at the 2014 World Senior Curling Championships in Dumfries, Scotland. Pinkney earned her spot by virtue of her first-place finish in pool play with an undefeated record, but Tallon had to win a tense quarter-final battle over home team Scotland to advance. 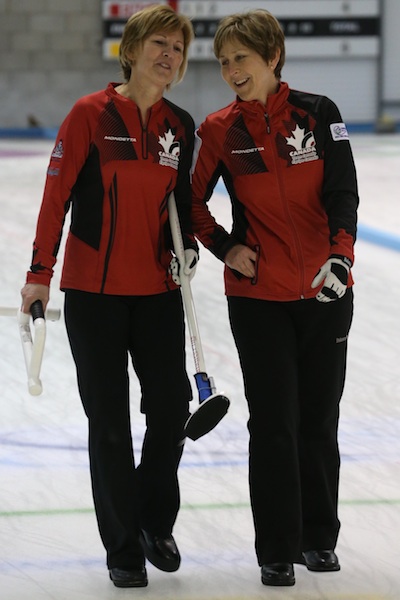 Pinkney and her team of third Wendy Currie, second Shelley MacNutt, lead Susan Creelman, alternate Judy Burgess and coach Bill Tschirhart powered their way to a 13-2 win over Russia’s Ludmila Murova in their last game of the round robin to earn top spot in the standings and a trip to the playoffs. Canada scored four points to start the game, then stole the next two ends to lead 9-0 after three. The Russians managed to score singles with hammer, but conceded after six ends. The Canadian skip from Truro, N.S., acknowledged that going unbeaten and earning an easy win against Russia is a confidence-builder, but she’s taking nothing for granted. “You never know what will happen in curling,” she said, looking ahead to the semifinal against Sweden’s Ingrid Meldahl. “We still have to come with our A-game. The other teams in the other sections are also gaining momentum, so we certainly won’t be going in over-confident. You have to expect the best from everybody.” On Tuesday morning at the Dumfries Ice Bowl, Tallon and his Fredericton, N.B., team of third Mike Kennedy, second Mike Flannery, lead Wade Blanchard, alternate Charles Kingston and coach Bill Tschirhart dominated Germany’s Rainer Schoepp, stealing four points in the sixth end to go up 9-2 and put the game away. With the win, Tallon finished the round robin with an 8-0 record – the only undefeated team in the 25-team men’s competition – and progressed to the quarter-final on Tuesday evening against Scotland’s Keith Prentice (5-2). In a tight game, Canada trailed 5-4 after seven, but scored two with hammer to secure the 6-5 win – and ensure a semifinal berth versus USA’s Jeff Wright on Wednesday morning. On April 30, the senior men’s and women’s gold-medal and bronze-medal games are scheduled for 7:30 a.m. Eastern. For live scores and standings from the World Seniors Championship, go to: wscc2014.curlingevents.com/. 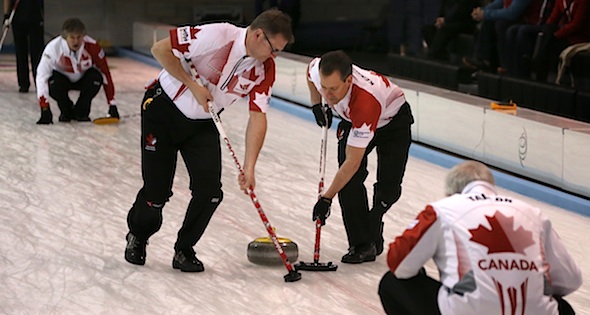