Gold and silver for Canada at World Seniors

It’s a gold medal repeat for Canadian men at the 2014 World Senior Curling Championships as Wayne Tallon capped off a perfect week, finishing on the top of the podium at the Ice Bowl in Dumfries, Scotland, on Wednesday morning. Tallon and his Fredericton, N.B., team of third Mike Kennedy, second Mike Flannery, lead Wade Blanchard, alternate Charles Kingston and coach Bill Tschirhart controlled the game from the outset to win the men’s final 7-2 over Sweden’s Connie Oestlund and bring home Canada’s ninth senior men’s world title. 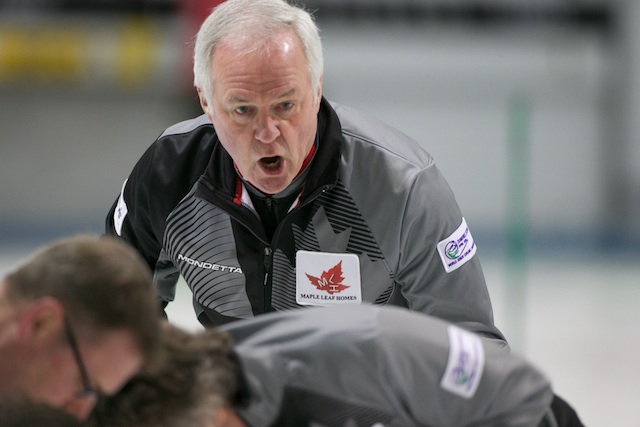 “I’m just lost for words. Really ecstatic about it,” said Tallon after the game.  “I’m really happy at how the boys played, they played really hard, so it feels good.” “We were patient. We were trying to score soft deuces without too much risk and we were able to do that – textbook curling – take two and give up one, take two and give up one,” he said. “That was the plan, that was the way we executed it and that’s the way it turned out.” Tallon said the win was even more special after having been involved in the championship last year (as Chair of the World Curling Championships 2013 held in Fredericton, N.B.). “Last year my responsibility was to ensure everybody had a good time,” he said. “This year it was to make sure that everyone played well and we kept the team unit together an focused. I think we showed that in every single game we played in this week.” In the women’s final, Pinkney and her team of third Wendy Currie, second Shelley MacNutt, lead Susan Creelman, alternate Judy Burgess and coach Bill Tschirhart lost 6-5 to Scotland’s Christine Cannon in a close battle. Trailing 5-4 after seven, Cannon stole two in the final end to claim the gold in front of a hometown crowd. “We are very disappointed right now but will be happy in a couple of hours,” said Pinkney. “Basically the key was that Scotland had two great last ends and we’ve missed a couple of shots that we couldn’t afford.” Pinkney was hoping to win Canada’s seventh consecutive gold medal, and her second — Pinkney, Currie and Creelman (Karen Hennigar played second) went unbeaten to win gold in 2010 at Chelyabinsk, Russia. Canada has won nine times since the World Seniors were introduced in 2002. Both Canadian men’s and women’s teams went undefeated throughout the round robin. Pinkney earned a spot in the semifinal by virtue of her first-place pool finish, but Tallon had to qualify for the semifinal by defeating Scotland’s Keith Prentice 6-5 in the men’s quarterfinals on Tuesday. In the semifinals, Tallon defeated USA’ s Jeff Wright 5-4, while Pinkney won 6-5 over Sweden’s Ingrid Meldahl. 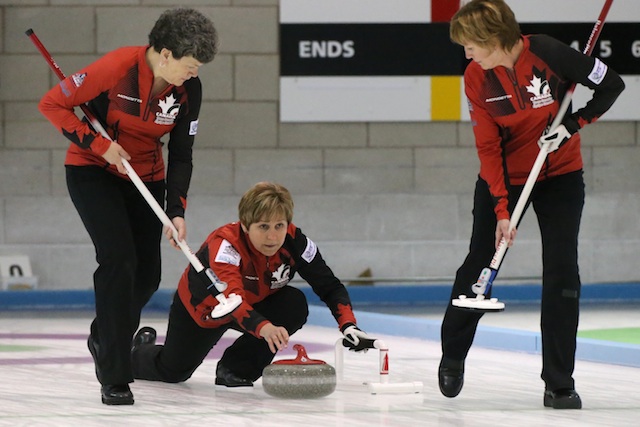 At the 2013 event in Fredericton (which was chaired by Tallon), Rob Armitage of Red Deer, Alta., won the men’s gold medal while Cathy King of Edmonton captured the women’s gold. Both of the Canadian teams at the 2014 World Seniors qualified for the trip to Scotland by winning their respective titles at the 2013 Canadian Senior Men’s and Curling Championships in Summerside, P.E.I. For scores, standings and event information from the World Senior Curling Championships, go to: wscc2014.curlingevents.com/.