Quebec and Ontario tied at the top

With seven draws completed in the Canadian Wheelchair Curling Championship, the defending champions from Quebec look determined to defend their 2013 title after scoring two big wins on Thursday at the Club de curling Boucherville. Magog’s Benoit Lessard, with his team of Carl Marquis, Sébastien Boisvert, Johanne Daly and coach Germain Tremblay defeated Saskatchewan’s Darwin Bender 8-2 on Thursday morning, and went on to steal a lopsided 11-3 win over B.C.’s Darryl Neighbour in Draw 7. 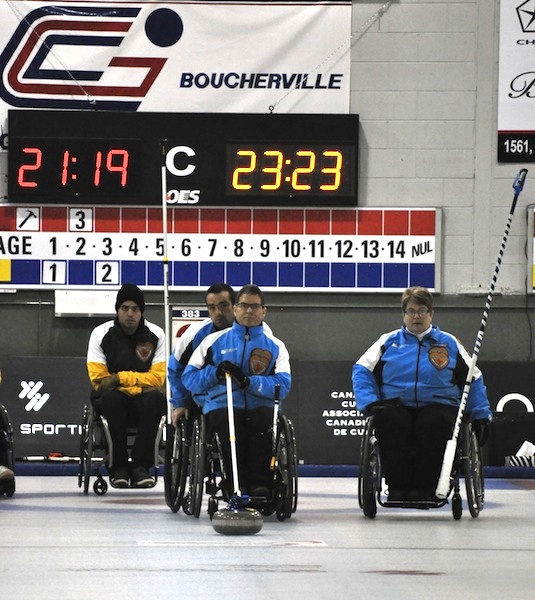 With the two wins, Quebec now shares first place with Ontario’s Mike Munro, both teams with 6-1 records. Munro and his team from the Ilderton Curling Club, lost their first game of the round robin on Monday morning, a 12-3 rout by Dennis Thiessen of Manitoba. But Ontario bounced back against Nova Scotia’s George Horning in the afternoon draw, scoring five points in the seventh end on the way to a 9-5 win. Sitting close behind the two leaders are B.C., Alberta and Manitoba, all with 4-3 records. B.C. defeated Nova Scotia 11-6 in the morning draw, but came up short against Quebec in the afternoon. Similarly, Alberta’s Jack Smart started the day with a 9-6 victory over Newfoundland and Labrador in the first game of the day, but lost to Northern Ontario’s Gino Sonego 6-4 in Draw 7. Thursday was a big day for Thiessen and his Winnipeg team of Mark Wherrett, Melissa Lecuyer, Jamie Anseeuw and coach Tom Wherrett, who climbed closer to the leaders with two decisive wins. After downing Ontario 12-3 in the morning, Thiessen stole five points on the way to a 12-4 win over Newfoundland and Labrador’s Joanne MacDonald. 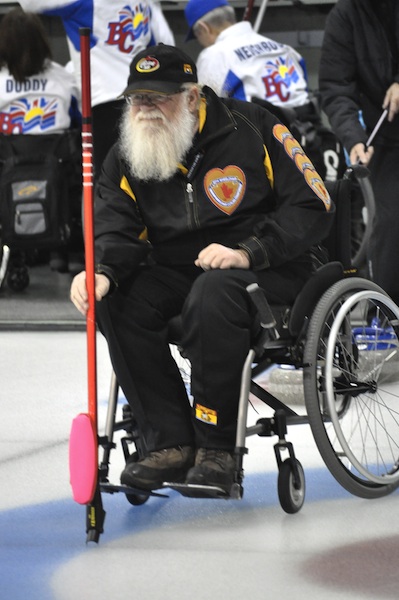 On Thursday morning, New Brunswick’s Michael Fitzgerald and his team from the Thistle Saint Andrews Curling Club in Saint John stole two points in an extra end to defeat Northern Ontario’s Gino Sonego, 8-6, and earn their first win of the competition. In a close afternoon game with Saskatchewan’s Darwin Bender, Fitzgerald scored one in the eighth to force an extra end, but Bender finished with a clutch draw for the 8-7 win. With seven sessions completed in the round robin, Quebec and Ontario now sit at the top of the standings with 6-1 records, followed by Saskatchewan, Manitoba and B.C. at 4-3. Alberta and Northern Ontario are close at 3-4, and Nova Scotia and Newfoundland and Labrador (2-5) and New Brunswick (1-6) round out the field. The final two draws of the round robin take place on Friday, with tie-breakers Friday evening and Saturday morning, if required. Live streaming of the event is available at https://www.ustream.tv/channel/wcblog2
Draw results and other event information is available at www.curling.ca and www.curling.ca/2014wheelchair-en.
Since the inaugural Canadian championship in 2004, British Columbia has four titles – in 2007 (skip Darryl Neighbour), 2008 and 2009 (skip Jim Armstrong) and 2010 (skip Gary Cormack). Team Canada (skip Chris Dawe) has three victories (2004-2006) while Manitoba (2011) , Saskatchewan (2012) and Quebec (2013) have each won once.