Manitoba’s Dennis Thiessen and his Assiniboine Curling Club team are the 2014 Canadian wheelchair curling champions after stealing four ends on the way to an 8-5 victory over the defending champion, Quebec’s Benoit Lessard, on Sunday afternoon in Boucherville, Que. 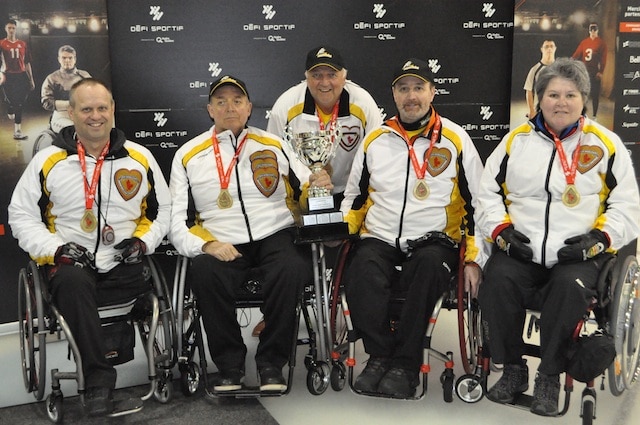 “What an unbelievable feeling,” said Thiessen who was backed by third Mark Wherrett, second Melissa Lecuyer, lead Jamie Anseeuw and coach Tom Wherrett. “We just kept the pressure on and took advantage of a few misses. It feels great. I’m so proud of my team.” The game started aggressively, with lots of rocks in play and both skips showing confidence in calling the difficult shots. Manitoba led 7-2 after five ends and appeared to be in control of the game, but Quebec fought back in the sixth. Lessard, made a delicate takeout to score three and climb back to within two points. But it wasn’t enough. In the eighth, with two Manitoba rocks in the rings, Lessard’s first rock wrecked on a guard, ending Quebec’s hopes for a repeat title and giving Thiessen his second Canadian championship since 2011. Lessard and his team of vice Carl Marquis, second Sébastien Boisvert, lead Johanne Daly and coach Germain Tremblay finished with an 8-1 record at the top of the standings after the round robin, but Thiessen made it to the finals the hard way. After finishing in a four-way tie for third, he won a tie-breaker over Saskatchewan’s Darwin Bender on Friday night, then defeated Alberta’s Jack Smart in the Page 3-4 playoff. In the semifinal against Ontario’s Mike Munro on Sunday morning, Manitoba took control with a steal of four in the fifth end and ran Ontario out of rocks for the 8-3 victory and a date with Quebec in the championship final. “It feels like a golden year,” said Thiessen, who can add the Canadian championship to his 2014 Paralympic title. “I came here with no expectations, but we played our best and look where we are.”
Draw results and other event information are available at www.curling.ca and www.curling.ca/2014wheelchair-en.
Since the inaugural Canadian championship in 2004, British Columbia has four titles – in 2007 (skip Darryl Neighbour), 2008 and 2009 (skip Jim Armstrong) and 2010 (skip Gary Cormack). Team Canada (skip Chris Dawe) has three victories (2004-2006) while Manitoba (2011) , Saskatchewan (2012) and Quebec (2013) have each won once.