One of the best players in curling history, and one of the game’s most prominent behind-the-scenes supporters comprise this year’s list of inductees to the Canadian Curling Hall of Fame. 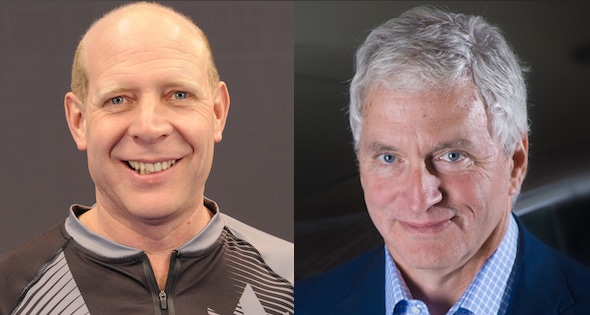 Kevin Martin, left, and George Cooke are being inducted into the Canadian Curling Hall of Fame.

Kevin Martin, a three-time Olympian who won gold at the 2010 Winter Olympics in Vancouver and silver in 2002 at Salt Lake City, will be joined by former Dominion Insurance Chief Executive Officer George Cooke when the Class of 2014 is formally inducted at the CCA Hall of Fame and Awards Gala on Aug. 26 in Niagara Falls Ont. “The contributions of both Kevin and George to the sport of curling over the years go well beyond what people saw on television or read in the newspapers,” said Hugh Avery, Chair of the CCA Board of Governors. “Both played major roles in bringing curling to the forefront of the Canadian sports scene, and they are worthy inductees to the CCA Hall of Fame.” 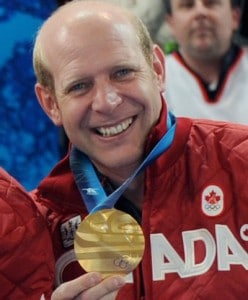 Martin, who announced his retirement from competitive curling in April, also won four Brier titles — tied with Ernie Richardson and Randy Ferbey for the most as a skip — in addition to capturing a record 12 Alberta men’s championships. In his four trips to the World Men’s Curling Championship, he won gold in 2008 at Grand Forks, N.D., and silver in 1991 at Winnipeg and 2009 at Moncton, N.B. His 1991 Brier victory also earned him his first of three trips to the Winter Olympics, as he skipped Team Canada at the 1992 Winter Games in Albertville, France, where curling was a demonstration sport. Additionally, Martin won a record 18 events on the World Curling Tour Grand Slam series, including his career-capping victory last month at the Players’ Championship in Summerside, P.E.I. “It really is a thrill to be named to the Canadian Curling Hall of Fame and be mentioned with some of my curling heroes,” said Martin, who also won the 1985 Canadian junior men’s championship. “The sport of curling has taken me around the world and I’ve met some truly wonderful people and had some amazing experiences, while also being blessed with gifted teammates over the years who helped me achieve this. Being named to the Hall of Fame is a great way to cap a career, and I’m grateful for the honour.” Cooke’s passion for curling, meanwhile, goes far beyond his longtime participation at the club level. As the CEO of The Dominion of Canada General Insurance Company (now known as Travelers Canada), he was the driving force behind the creation in 2009 of the highly successful Dominion Curling Club Championship (now the Travelers Curling Club Championship), aimed at giving club-level curlers a chance to compete for a national title. In fact, as a member of the reigning club men’s champions at his home club — the Donalda Club in Toronto — he will compete in the Travelers Curling Club Championship playdowns this fall. 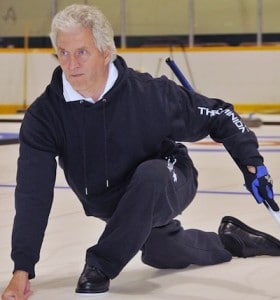 In addition to being a longtime player, George Cooke has been a passionate backer of the sport of curling. (Photo, courtesy George Cooke)

As well, The Dominion was active in other areas of curling, including youth camps, partnerships with the CCA’s Member Associations and sponsorships of high-performance curling teams. Cooke is an active member of the Donalda Club, where he coaches for Crestwood Preparatory College (he will be coaching his daughter’s competitive junior team this coming season), and also is vice-president of the Toronto Curling Association. “Curling has been a part of my life for as long as I can remember, and it’s an absolute thrill and privilege to be joining the Canadian Curling Hall of Fame,” said Cooke, a life member of the Ontario Curling Association. “It’s especially gratifying because so much of the work we tried to do is aimed at the club-level curlers, who are the lifeblood of the sport, as well as curling development programs.” The CCA Hall of Fame and Awards Gala will be staged during the inaugural Canadian Curling Association Summit, beginning Aug. 24 in Niagara Falls. “Curling’s history is such an integral part of our sport, and it’s wonderful that we can honour people such as Kevin and George in the Hall of Fame,” said Shirley Osborne, Chair of the CCA Hall of Fame Committee. “As usual, there was no shortage of worthy candidates, and that’s a pleasant dilemma to have.”