Four members of Canada’s gold-medal winning Olympic curling teams will be participating in the inaugural Swing & Sweep Golf Tournament, it was announced today by the Canadian Curling Association. 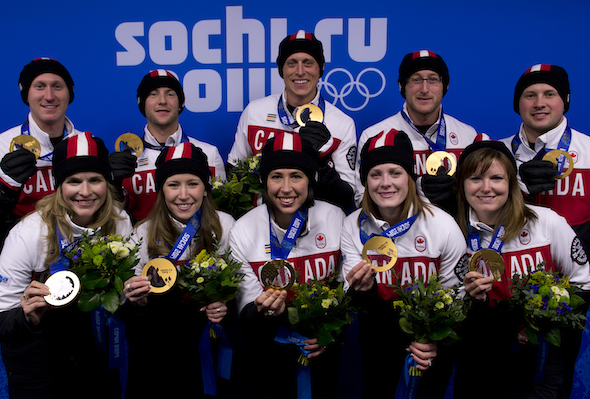 Some of Canada’s gold-medal winning curlers from the Sochi Olympics will be participating in the first Swing & Sweep charity golf tournament in Niagara Falls, Ont. (Photo, CCA/Michael Burns)

Men’s gold-medallists skip Brad Jacobs and third Ryan Fry, and women’s gold-medallists third Kaitlyn Lawes and second Jill Officer will tee off in the tournament, which will raise funds directed to the For The Love of Curling scholarships and youth curling development programs. The tournament is scheduled for Aug. 27, 2014, at the Thundering Waters Golf Club in Niagara Falls, Ont., and will be one of the highlighted events during the CCA’s first Curling Summit. “We’re ecstatic that our Olympians will be participating in the tournament in the wake of their successes in Sochi,” said Greg Stremlaw, Chief Executive Officer of the CCA. “Canada’s young curlers look up to them, of course, and that fits in perfectly with the fundraising ambitions of the tournament.” Registrations for the tournament are now being accepted at www.curling.ca/summit2014/cca-golf-day/, with a cost of $144 per player and $576 for a foursome. The fees include a barbecue lunch, an 18-hole round (shotgun start) and an evening banquet, which also will feature a silent and live auction. As well, VIP foursomes are also available, allowing participants to golf with a celebrity chosen by random draw, at a cost of $1,500 per foursome.