Curler Kevin Martin, longtime player and curling supporter George Cooke, and former CCA Board of Governors chair Ron Hutton were inducted into the Canadian Curling Hall of Fame at an awards gala on Tuesday evening to wrap up the first National Curling Summit, taking place in Niagara Falls, Ont. 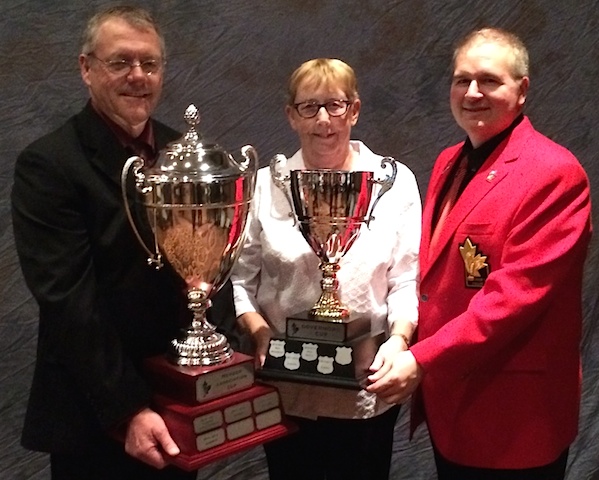 (From left) Dan Kleinschroth, past-president of the Alberta Curling Fed., Joan Westgard, current president of the ACF, and Hugh Avery, Chair of the CCA Board of Governors with the MA Cup, presented by TSN, and the Governors’ Cup. (CCA Photo)

Also on Tuesday night, the Alberta Curling Federation won both the MA Cup, presented by TSN, along with the Governors’ Cup. The MA Cup goes to the Member Association with the best average result at the eight CCA national championships, while the Governors’ Cup is awarded to the Member Association that posts the best per-event average improvement from the previous season. Earlier in the day, Olympic gold medallists Brad Jacobs, Ryan Fry, Jill Officer and Kaitlyn Lawes, and Paralympic wheelchair gold-medallist Mark Ideson received standing ovations after sharing their experiences in Sochi with an enthralled audience of Summit participants. These events were part of a two-day conference devoted to exploring challenges and innovations on the Canadian curling scene, and sharing strategies for developing the sport even further. In his opening address on Sunday evening, CCA Board of Governors Chair Hugh Avery said that Canada now holds the No. 1 position internationally in the three curling disciplines – men’s, women’s and wheelchair – something no other country has done in any sport previously, although he warned that being on top doesn’t mean sitting back. “There’s always room for growth and innovation for curlers, coaches and the sport’s administrators,” he said. And that’s exactly what the National Curling Summit addressed in its sessions, as presenters and participants discussed the challenges of maintaining Canada’s position on the world stage while developing a strong grassroots and competitive curling culture at home. In an inspiring keynote address, Anne Merklinger, former Scotties finalist and multi-discipline athlete who now guides Canada’s Olympic and Paralympic athletes as CEO of Own the Podium, said that the CCA’s program for developing winners is a model for other Canadian sports organizations, but in fact the job isn’t finished. “We are not satisfied,” said Merklinger about Canada’s fourth-place finish in the medal standings in Sochi. “We are driven by the relentless pursuit of excellence.” While Merklinger addressed the elite levels of curling in Canada, presenters Richard Norman, an organizational strategist, and Dr. Heather Mair, Associate Professor of Recreation and Leisure Studies at the University of Waterloo, challenged participants to look at the grassroots level and ask “What if…?” and ponder what changes are needed in strategy and outlook to attract new curlers to the sport. Change was also the theme of the presentation by Rob Krepps (Head Coach of the CCA’s National Training Centre at the University of Alberta’s Saville Centre in Edmonton), who introduced the possibility of hiring curling club professionals to deliver instruction instead of relying on the traditional volunteer model. “Having someone with expertise and credibility is a customer service issue that makes sense financially,” said Krepps, stressing that in the long run, this is how to retain members as well. Monday afternoon also saw two lively panel discussions, the first of which tackled the question “Why aren’t we cool?” Addressing some of the challenges of appealing to new curlers, panelists and participants shared ideas on how to make curling more relevant and available. 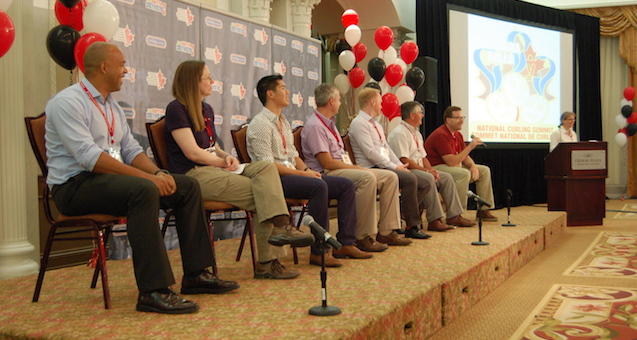 A second panel discussion explored the trend of dwindling entries in competitive events, which don’t seem to be as well-attended or well-supported as they were previously, said CCA Director, High Performance, Gerry Peckham. Is the success of elite teams driving other competitors away? Curlers Nolan Thiessen and Amber Holland joined Curlingzone’s Gerry Geurts, Own the Podium’s Merklinger and several others to share insights into the competitive experience and suggest ways to provide competitive opportunities to keep the sport vibrant. Monday’s program also included a trade show and exhibition showcasing innovative curling products and services. Continuing on Tuesday, sessions addressed the Long Term Athlete Development model with Curl Atlantic’s Helen Radford; how to ensure the best ice conditions with CCA’s National Ice Technician Jamie Bourassa and Canada Curling Stone’s Fred Veale; as well as topics such as how to take curling into schools, how to embrace social media in promoting the sport, how to build capacity in curling clubs, and the most effective way to market – and make money from – curling. One of the highlights of the Summit took place at Tuesday’s luncheon, when participants were treated to a look back at curling successes in Sochi with the athletes, as well as Canadian Olympic Curling Team Leader Paul Webster and Canadian Paralympic Curling Team Leader Wendy Morgan. A closing keynote from Stewart Johnston, President of TSN, was followed by the CCA Hall of Fame and Awards Gala. While the sessions wrapped up on Tuesday, the action continues Wednesday with more than 100 participants heading out to the Thundering Waters Golf Club for the inaugural Swing and Sweep Golf Tournament, presented by Pinty’s, in support of the CCA’s For the Love of Curling program. Olympians Jacobs, Fry, Officer, Lawes and Richard Hart (Nagano 1998), as well as 2014 Tim Hortons Brier champion Nolan Thiessen and former Scotties and world champion, Marilyn Bodogh, were set to join participants on the course. The first CCA National Curling Summit was designed to stimulate conversation about important issues affecting curling, now and in the future, with a goal of growing the sport in all communities across Canada. “I was extremely impressed with how open people were to new concepts,” said presenter Krepps afterwards. “And, regardless of their club or association affiliation, it was clear to me that everyone’s overriding priority was the long-term well-being of our sport.” 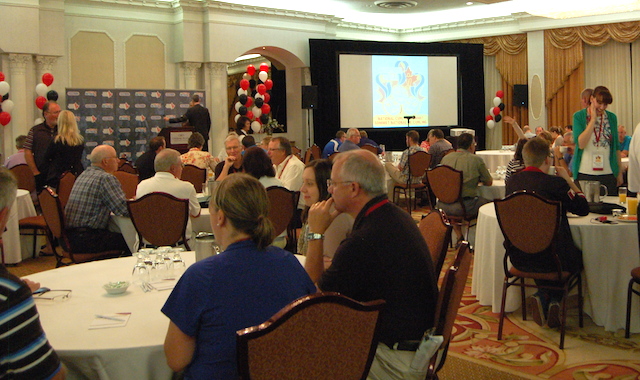 Participants of the first National Curling Summit prepare for the opening sessions at the Crowne Plaze Hotel in Niagara Falls, Ont. (CCA Photo)