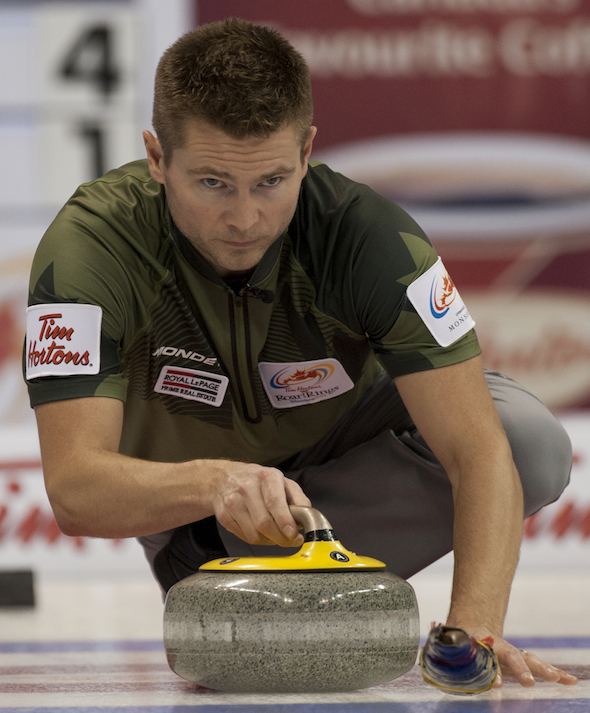 Winnipeg’s Mike McEwen will be among the favourites at the Stu Sells Tankard this weekend in Oakville, Ont. (Photo, CCA/Michael Burns)

Only Team Steve Laycock of Saskatoon made the trip to Switzerland, where he won three games, but failed to make the playoffs. For the rest of Canada’s top teams, this is the first chance for serious competition, to test out new lineups and make some prize money. The men’s draw in Oakville will feature several new-look teams, including those skipped by Winnipeg’s Reid Carruthers, Calgary’s Brock Virtue, Toronto’s John Epping and Mark Kean, and Adam Casey of Charlottetown. Carruthers, coming off four seasons at front end with Jeff Stoughton’s world championship rink, is returning to the skip position where he won a Manitoba junior title and a Manitoba mixed title. Casey, a junior world silver-medallist himself, returns to his home province of P.E.I. after two Tim Hortons Brier appearances with Brad Gushue out of Newfoundland. Epping and Kean, two top-ranked Ontario skips, have essentially traded teams, and will likely face off in several bonspiels this season. 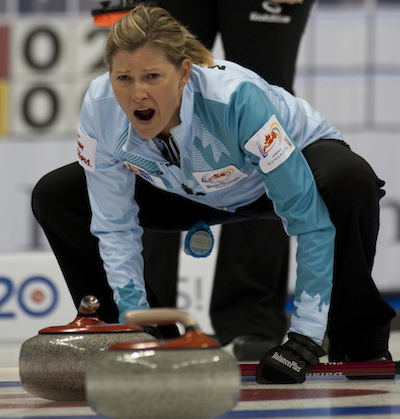 Sherry Middaugh’s team from Coldwater, Ont., will be in action this weekend in Oakville. (Photo, CCA/Michael Burns)

While there are a lot of new lineups, there’s also an abundance of established talent. The rest of the field includes three-time Grand Slam winner Mike McEwen of Winnipeg, 2014 Tim Hortons Brier Ontario rep Greg Balsdon of Hamilton, and three Olympic representatives in Sochi: Scotland’s David Murdoch (who won silver for Great Britain) Sweden’s Niklas Edin (the bronze-medallist, although with a different team) and John Shuster of the U.S. There will be plenty of top-level competition for the $30,000 purse. The 25 women’s teams also have some notable skips. Sherry Middaugh of Coldwater, Ont., last year’s Tim Hortons Roar of the Rings finalist, is the defending champion of the Stu Sells Tankard. Gunning for her will be former Ontario provincial Scotties champions Alison Flaxey (2014) of Listowel and Tracy Horgan (2012) of Sudbury, as well as last season’s CIS Canadian University Champions from Carleton University in Ottawa, who will have another former CIS champ, Hollie Nicol, filling in as skip for the weekend. There is plenty of international flavour as well, featuring three-time U.S. Olympian Erika Brown, and 2013 Swiss Champion Silvana Tirinzoni, who is currently ranked sixth in the World Curling Tour Order of Merit (highest in the women’s field). The top 12 of the 30 mens teams will make the playoffs, and at least a bit of money, while 10 of the 25 women’s teams will advance. Teams are arranged into pools, but it’s the overall record that dictates the top 10. While it is frequently thought that the season following an Olympic cycle is great for experimental lineups, top teams realize that it’s not a throw-away season, as was once thought. Points earned this season dictate which upcoming events they’ll be eligible for, such as the Canada Cup of Curling, presented by Meridian Manufacturing (Dec. 3-7 at Encana Arena in Camrose, Alta.), and the Grand Slams. Those events carry major points, and always affect the final results on the CTRS leaderboard. Play began Thursday afternoon and continues until Sunday. Results are posted at www.ontariocurlingtour.com. (Keep checking www.curling.ca throughout the season for weekly updates on curling events around the world)