When the dust settled after the first Canada-based World Curling Tour event of the year, the two top-ranked teams coming in lived up to their advance billing. 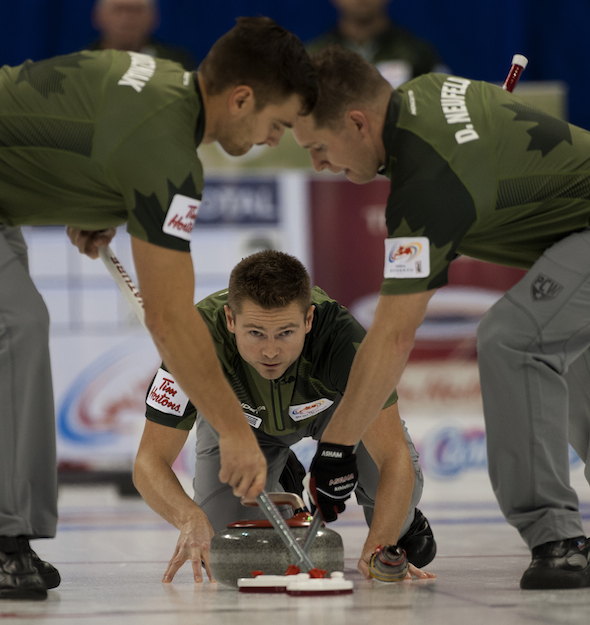 Winnipeg’s Mike McEwen and Switzerland’s Silvana Tirinzoni, the two highest-ranked teams playing in the Stu Sells Tankard in Oakville, Ont., came away as the 2014 champions, and McEwen earned valuable points in the Canadian Team Ranking System standings. McEwen, who was ranked third in the world on the Order of Merit standings behind Olympic gold-medallist Brad Jacobs and Norwegian world champion Thomas Ulsrud, ran the table with a perfect 7-0 record, beating Toronto’s Mark Kean twice, American Olympian John Shuster, and finishing off Toronto’s John Epping 6-2 in the final. With the victory, McEwen and teammates B.J. Neufeld, Matt Wozniak, and Denni Neufeld picked up $7,500 and, more importantly, 30 CTRS points to give his team the early lead in the standings. It also moves his team into second place on the world Order of Merit. Epping gained 22.5 CTRS points for his second-place finish, which puts him second in the CTRS and ninth among Canadian teams on the Order of the Merit. The Canadian Team Ranking System (CTRS) dictates which teams qualify for major Season of Champions events such as the Tim Hortons Roar of the Rings (Canadian Curling Trials) and the Canada Cup of Curling, presented by Meridian Manufacturing. The World Curling Tour Order of Merit, on the other hand, includes all international teams and decides which teams get invited to Grand Slam events. The points for each event are decided by the strength of field, and so earning points early on, and potentially berths in the major events, leads to the opportunity to play for bigger points in upcoming bonspiels. On the women’s side, an all-Swiss final saw Tirinzoni beat Alina Paetz. The 22.68 points moves Tirinzoni past Russia’s Anna Sidorova, and into fifth on the world list. The only team to beat Tirinzoni was the CIS Champion Carleton Ravens team, skipped temporarily by Hollie Nicol. Nicol’s won the round-robin matchup in an extra end, but Tirinzoni got her revenge in the semifinal taking down the Carleton rink, 6-1. Nevertheless, Nicol (filling in for skip Breanne Meakin), along with the other semifinalist, Danielle Inglis of Toronto, gained 13.23 points, which moved both teams up several spots in the CTRS. The first big event of the year featured some new-look teams including those of Winnipeg’s Reid Carruthers, Calgary’s Brock Virtue, and Charlottetown’s Adam Casey. All three are trying out new lineups after previously playing in the Tim Hortons Brier with other teams. Carruthers ran the table in the round robin before losing to Kean in the quarter-finals. This earned Carruthers 12.5 CTRS points, and Kean 17.5 for reaching the semifinals. Virtue won two games, but failed to qualify for the playoffs. Casey’s new squad struggled out of the gate and was unable to find a win in their first four games together. The World Curling Tour season continues this coming weekend with the HDF Insurance Shootout men’s and women’s event at the Saville Centre Edmonton. (Keep checking www.curling.ca throughout the season for weekly updates on curling events around the world)