Here we are again, September of another curling season. For most curlers in Canada, this season represents new beginnings. New teams and new dreams are forming across the nation, and my 2014-2015 squad is no different. This season is going to be extra special for me, and not just because it is my final year as a junior curler. This season, I’m headed back into the rings full-time to skip a brand new squad rounded out by three amazing young curlers, including my younger sister. After years of playing against each other in provincial finals – not our parents’ favorite memories – Jamie has agreed to join forces with me and with our Dad, Mark, coaching our squad, I know this season is going to be full of memories that will last us a lifetime. Jamie-Rae and I began curling together at a young age at the Mayflower Curling Club in Halifax, N.S. I was four years old, while little Jamie-Rae was just two. Mom (Debbie) and Dad (Mark) took us out on the ice in full snowsuits and helmets, and although our slides weren’t exactly perfect back then, that first time on the ice sparked a love for the game in both of us. 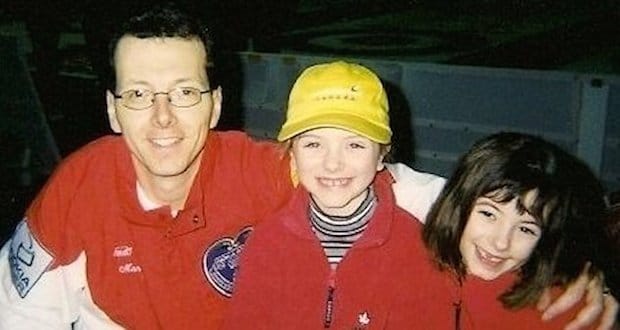 Sisters Cathlia (left) and Jamie (right) and with their father, Mark Ward at the 2003 Tim Hortons Brier in Halifax where Mark played lead for Brad Gushue. (Photo courtesy C. Ward)

Jamie and I grew up watching curling on TV like most children born into a curling family. Our favorite curlers when we were small were the big guns of Randy Ferbey and Colleen Jones, but we really liked to watch a young woman’s team from Saskatchewan. Two sisters helped form this team, and hey, Jamie and I were sisters who curled too! Turns out our biggest curling heroes growing up were none other than Marliese and Stefanie Miller, now Marliese Kesner and Stefanie Lawton. We thought it was so cool that two sisters could not only play together, but also win together. We often chatted, and even dared to dream, about what that could be like for us. 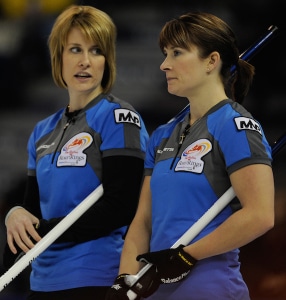 “Our biggest curling heroes growing up were none other than Marliese and Stefanie Miller, now Marliese Kesner (right) and Stefanie Lawton (left). We thought it was so cool that two sisters could not only play together, but also win together. We often chatted, and even dared to dream, about what that could be like for us.” (Photo Michael Burns/CCA)

After years of playing against each other, the time has come for the Ward sisters to come together on the curling ice. “I’m pretty excited,” says my younger sister, Jamie. “It’s nice that our entire family can work together to achieve our dreams. It gets rid of the awkward competitiveness of playing your sister when all you really want is for them to win too. I know it’s extra special for our parents, because they can feel the same emotions for both of us at the same time now. They never have to answer the awkward ‘who are you cheering for?’ questions at the club anymore!” Our team has already spent three weekends training together, and what I have learned in those three weekends surpasses any life lessons the sport has taught me to date. I’ve always known that winning and being able to call yourself a champion is an amazing feeling. But I’ve now learned that nothing will ever compare to high-fiving your little sister after a great end, or better yet, high-fiving your little sister after a win. What my time on the ice with Jamie has shown me is that family is important, really important. I would like all curling brothers, sisters, parents, cousins, aunts and uncles to think about the opportunities for family bonding that our incredible sports gives us. If you have the opportunity, play with your family members. I’ve learned in three weeks that the excitement on your sister’s face when you make an in-off to score two or a draw to the button to win is worth more than any championship could ever be. It’s these memories that truly mean the most. Keep Calm and Curl on!

The Ward sisters, Jamie (left) and Cathlia (right): “What my time on the ice with Jamie has shown me is that family is important, really important.” (Photo Keith Minchin/courtesy C. Ward)