Team Canada gets back to work

This past Thursday was the first official practice for Team Johnny Mo. We purposely have a very late start to the season, which seems to be very uncommon, but it is now time to start preparing for our first event of the season in Selkirk, Man., at the first Grand Slam event of the season. 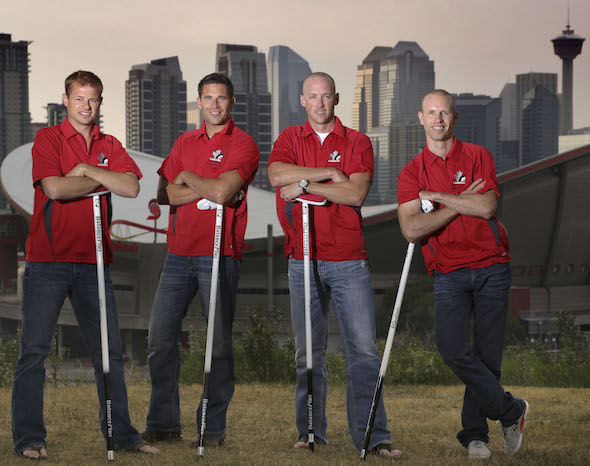 The day started at around 6 a.m. for me when my alarm rang to get me up and on the road to Calgary. Like many teams with the goal of winning the Tim Hortons Brier this season, we have players from different cities. The time and training commitment nowadays has created a smaller pool of players who are willing and able to compete at the highest levels, so the majority teams are not strictly from the same city and club. There are a few adjectives I would use to describe the drive between Edmonton and Calgary. “Boring” and “monotonous” but “often at harrowing speeds” are pretty much the first few that come to mind. On a nice clear day like Thursday, the speed limit is more considered a “minimum speed” than “maximum.” I promise I bucked the trend and kept it within legal limits, is all I will say. When I arrived in Calgary at the Glencoe Club, I had a quick chat with national coach Paul Webster and got out on the ice with Carter Rycroft. I have been on the ice for the past week, but it was Carter’s first session of the season. I always say it would be hilarious to have fans watch some of our team first practices. I know personally, my first couple of slides each season make Bambi seem sure-footed, so an outsider would probably look out at the ice and be totally baffled, saying to themselves “THAT GUY won the Brier twice?” The focus of my first practice of the day was not throwing; it was sweeping. I was working with Paul, using the “smart broom,” which tests a player’s sweeping pressure and speed in order to provide a measure of your effectiveness. I wanted to see if minor body positioning and broom-angle changes could improve my sweeping effectiveness. I don’t claim to be the best sweeper in the world but I do think I am effective. However, standing pat and not trying to improve mean someone is passing you by, so I was trying to see if a small tweak could improve my effectiveness and help the team win more games. We will see as the season unfolds if my changes worked! After practice Carter and I had a quick lunch and then were met by John and Pat Simmons for the first official team practice. I’ve noticed that the starts of our practices are often filled with Pat and me stretching while John and Carter discuss hunting. There is lots of talk about yardage, rutting, points, bugles (and not the old nacho chip snack shaped like a funnel) and so on. Pat and I can’t add much to these conversations but it’s nice to know that if our team is ever lost in the wilderness and we need to survive that we have two guys who can probably provide some food for us. Our first practice wasn’t very technical or structured as many would expect. We were mostly just shaking off the rust from a long summer off the ice. After about an hour and a half of throwing we decided that we were ready to battle it out in a two-on-two skins game. Many teams have these battles and due to our competitive natures, something is on the line for each team to varying degrees. We decided that the teams were John and myself versus Pat and Carter in a rolling best-of-five with lunch on the line at the end. Our first skins game was not what you’d call a masterpiece of shot-making, but in my mind it was good enough as John and I drew first blood. Our team went out together after the practice to discuss a few last housekeeping items. We shored up our sponsorships and discussed some ideas about the upcoming events and where we would be staying, when we would be flying out etc. As those who read my last blog know, as the logistics manager it’s now my responsibility to take these ideas and put them into action. Anything to keep the skips happy! Our final practice was a little more structured, with each of us throwing to brooms and changing sheets so that all four could throw together. This will be vital to our success this year: how quickly John is able to figure out how each of us throws and how he should ice us will pay dividends. Each player has minor differences in the way they throw and part of being a great skip is finding these out and putting the broom in the right spot to position each player for success. After eight years with Kevin Koe, these little differences were mostly left unsaid as they were known to all of us, but with a new skip we need to share that information — we can’t leave something unsaid and assume that John knows our idiosyncrasies. That could lead to a miss, which could be the difference in a win or a loss. Communication is one of the most significant aspects to every team’s success, and with a new skip that will be paramount for us. (Oh yeah and the practice ended with John and I losing Round 2 of the two-on-two battle … Carter and Pat cheated I assure you). The best part of the evening for me, though (no offence, boys) was at the end of the day I was able to pick up a trophy that we won last year. You may recognize it. More on that in my next blog … (Nolan Thiessen is a two-time Canadian champion who plays lead for Team John Morris, AKA Team Canada, who will be competing in the 2014 Home Hardware Canada Cup of Curling, presented by Meridian Manufacturing, Dec. 3-7 in Camrose, Alta.; the 2015 World Financial Group Continental Cup, presented by SecurTek, Jan. 8-11 in Calgary; and the 2015 Tim Hortons Brier, presented by SecurTek, Feb. 28-March 8 in Calgary).