Alberta Rocks: This one time, at curling camp…

Curling camp is just for kids and junior curlers, right? Wrong! Though I’d watched curling on TV my entire life, it wasn’t until I watched the Canadian Men’s and Women’s curling teams win medals at the 2006 Winter Olympics that I truly got inspired to get out on the ice and take up curling properly. I regularly play in Mixed Open and Women’s Leagues, but eight years after I first learned how to slide out and deliver a rock, I finally decided I needed to do something to get better. So I signed up for the Alberta Rocks Adult Curling Camp. In its 15th year, the annual Alberta Rocks Adult Curling Camp compliments the Junior Camp held earlier in the summer. Organized by the Alberta Curling Federation, it’s run by Paul Webster, national coach for the Canadian Curling Association and high performance coach for the Alberta Curling Federation. Over the course of a weekend, curlers of all abilities descended upon the Leduc Curling Club in central Alberta to learn how to improve their delivery, sweeping, strategy, and mental preparation. Webster assembled a team of coaches consisting of dedicated and passionate curlers, all with experience on the provincial, national, or world curling stage as either a junior or adult curler. What actually happens at adult curling camp? 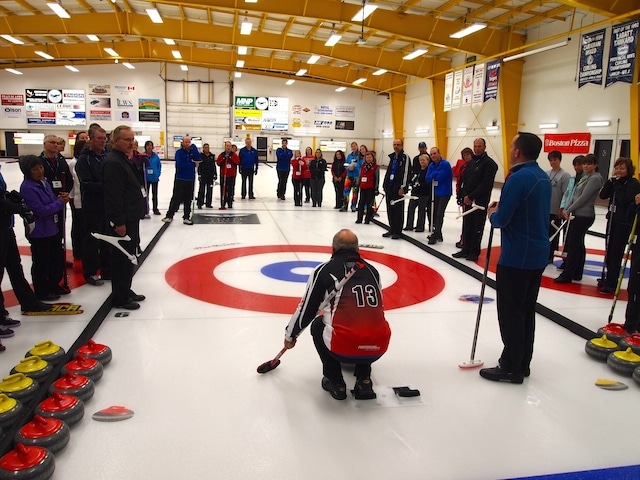 After a brief welcome and introductions, curlers were encouraged to brainstorm the skills they wanted to work on throughout the week. It wasn’t long before we were out on the ice, learning the six steps to an effective curling delivery. It was the first time most participants had stepped on the ice this curling season, so suffice to say there were a few aches and pains the next morning when we continued our on-ice instruction. Much time was spent practicing deliveries, discussing sweeping strategy, and using technology to analyze our form. Doug Marks, the coach for my team, also taught us about the latest equipment available, as well as some useful drills we could do at our home clubs to practice our new skills. Practice is key, so we learned. Mother and daughter, Alayne and Marilla Farries, saw the Alberta Rocks Adult Curling Camp advertised at their curling club in Red Deer, Alta. Alayne, who’s in her early 50s, took up curling three years ago. “I think that is number one in my head right now: practice, practice, practice!” she said. 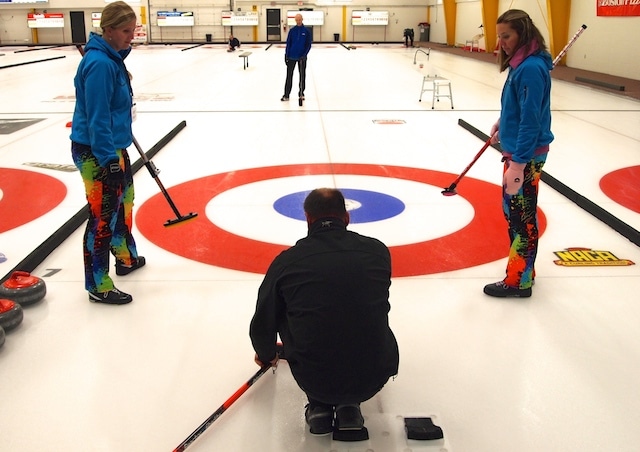 Curlers also got a chance to attend a classroom session on strategy, delivered by Andy Jones, instructor and master learning facilitator with the Southern Alberta Curling Association. I’m a lead, which means I throw a couple of rocks and sweep, sweep, sweep. I didn’t consider strategy as something necessary for me to know: that’s my skip’s job, right? Over the course of this classroom session, I learned more about curling strategy than I’ve learned from watching curling on TV my entire life. We learned the difference between strategy and tactics, and worked through a number of shot scenarios as a group. This useful discussion, between curlers of all levels and experienced coaches, will help me take my knowledge of shot making to the next level. After three days of learning and practicing, the Alberta Rocks Adult Curling Camp ends with The Great Shoot Out. For the first time in most of our curling careers, we had a chance to throw a rock in a high-pressure situation, with a crowd watching and cheering us on. Adrenaline was high and more than a few rocks sailed through the house, but by working as a team and cheering each other on, everyone felt like a pro throwing at the Olympics. 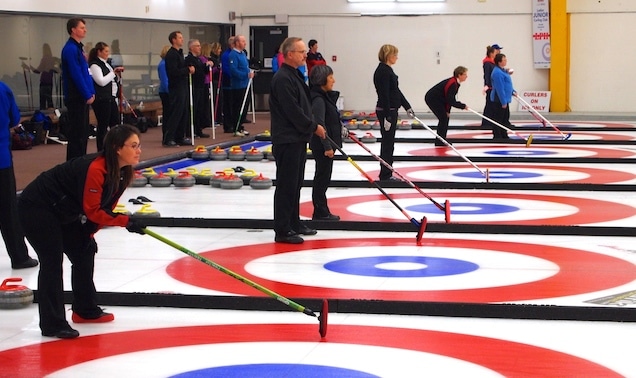 I found the instruction I received over the course of the weekend invaluable, and I’m more confident that I’ll be a better curler this season. Marilla Farries, who at 25 years of age has been curling for less than a year, sums up why we all got into curling in the first place: “It’s a sport for anybody – anybody can do it at any skill level. You wont be good at the beginning, but you’ll get there!”