With most of the top teams taking the week off, the World Curling Tour’s Prestige Hotel & Resorts Curling Classic in Vernon, B.C., seemed like a good opportunity for some Canadian women’s teams to score some easier points on the Canadian Team Ranking System list. 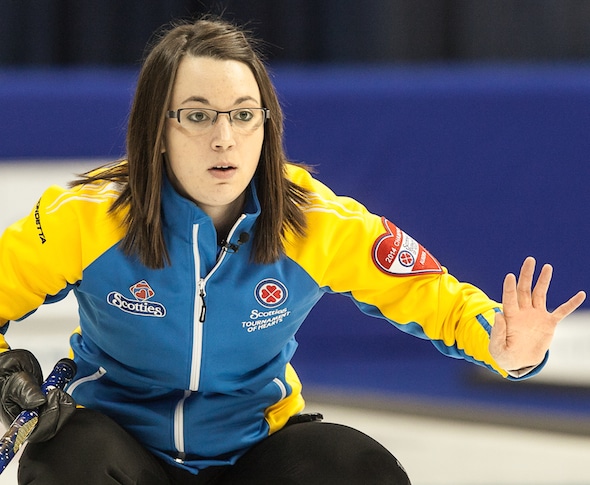 And while some were able to cash in, two Japanese teams took home the lion’s share in the 32-team event. Japan’s Ayumi Ogasawara took home the title, and the 16.55 points, by stealing the eighth end from Edmonton’s Val Sweeting, and winning 5-4. Sweeting, the highest-ranked team in the event on the WCT’s Order of Merit, improved her ranking from ninth to third among Canadian teams with the 11.585 CTRS points she earned for reaching the final. Ogasawara also won $7,900 for the championship, while Sweeting took home $5,900. Perhaps the biggest surprise in the bonspiel results was a second Japanese team in the final four. Satsuki Fujisawa also reached the semifinals, defeating Winnipeg’s Kerri Einarson in the quarters. Kelowna’s Kelly Scott was the other semifinalist, which should be seen as a positive result for her first event with her new team. Each semifinalist took home $4,500 and 8.275 CTRS points. While Sweeting was able to move up the list, and Scott earned her first points of the year, the weekend’s results were likely a disappointment for Edmonton’s Chelsea Carey. Going into the event Carey was fourth on the CTRS, but after winning three games, yet failing to qualify, Team Carey must feel like it was a missed opportunity to improve its standing. The men’s WCT Order of Merit saw a lot of movement this weekend, but not much by Canadians. The Swiss Cup in Basel, Switzerland, featured almost all of Europe’s top teams, but no Canucks. Due to the high-calibre teams involved, there were a lot of points up for grabs, with Scotland’s Tom Brewster earning 26.62 points for edging out Switzerland’s Sven Michel in the final. Michel adds 19.215 points, which moves him up a spot on the world list. On the home front, the men’s side of the Vernon event saw Kelowna’s Jim Cotter’s first appearance with a new lineup. The Cotter foursome lost the semi-final to 2000 World Champion Brent Pierce and his Kelowna-based team, earning them their first 5.225 points of the season. Pierce went on to the final, where he lost to Maple Ridge, B.C.’s Grant Dezura, and his team of Kevin MacKenzie, Jamie Smith, and Kevin Recksiedler. Dezura and his team took home $7,500 and 10.45 points on the CTRS. Former Canadian junior champion Brendan Bottcher (Edmonton) reached the semifinals, earning 5.225 points, and leaving him just out of the Top 10 on the CTRS. In the other weekend event, Edmonton’s Avonair Cashspiel was won by South Korea’s Soo-Yuk Kim, earning his team $3,000. The women’s side was won by another Pacific Rim team, skipped Japan’s Mari Motohashi. This coming weekend is extremely busy and highlighted by the first women’s Grand Slam event of the season, the Curlers Corner Autumn Gold Classic in Calgary. Other women’s WCT events are in Basel, Switzerland, and St. Paul, Minn. On the men’s side, there are events in Toronto, Edmonton, Regina and St. Paul, Minn. Click here for updated CTRS standings