On September 27, over 50 curlers had a chance to get up close and personal with Heather Nedohin and some curling “friends” at the Sherwood Park Curling Club, kicking off the new season – and Nedohin’s new role as the club’s Curling Pro and Manager – with camps for both juniors and adults. Nedohin, who earlier in her career ran the Campus Recreation Centre at Grant McEwan College, is excited about her new job but says there’s a steep learning curve. “I’ve never been so busy in my life,” she says. “I always thought and dreamt about curling, but my programming roots are really filtering through very quickly.” And programming is exactly what the 2012 Scotties Tournament of Hearts champion and World bronze-medallist had in mind when she invited her teammates – Amy Nixon, Jessica Mair and Laine Peters – along with husband David, former Team Ferbey skip Randy Ferbey and lead Scott Pfeiffer and a few other friends to help at the first Pros in the Park Curling Camp. 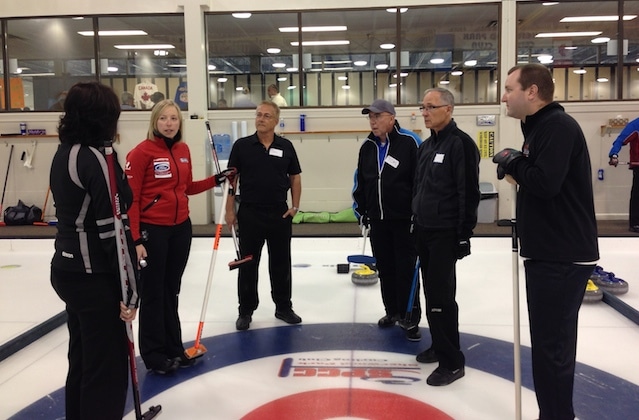 Beth Iskiw gives feedback to a group of adult curlers at the Pros in the Park Curling Camp (Photo courtesy H. Nedohin)

Twelve young curlers spent the day on the ice with Team Nedohin, working on delivery and sweeping skills. After lunch (“Chicken fingers, what else?”), Nedohin organized a scavenger hunt for the curlers, with each participant receiving t-shirts and stuffed bears generously provided by the team’s sponsor, TAQA. Later, it was the adults’ turn. Ferbey and David Nedohin provided a session on strategy and back end skills, while Nixon and Rona Pasika provided technical feedback, former team third, Beth Iskiw, led practice drills, Pfeiffer and Peters instructed sweepers, and Nedohin introduced the technology of “speed traps.” 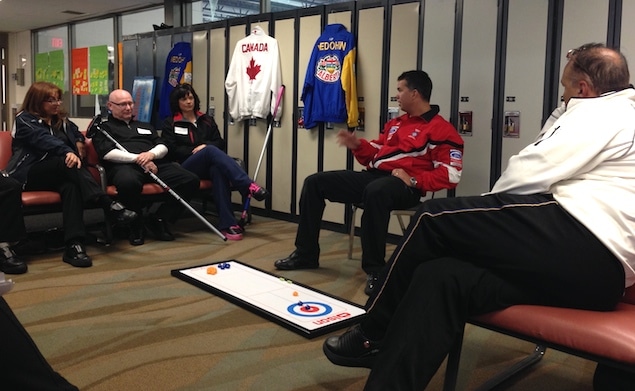 Of course, there was also socializing, after a couple of pro-am two-end games and a draw-to-the-button competition, won by David Nedohin’s team. For Nixon, it was a day of sharing her experience and connecting with her teammates. “When I get a chance to work with juniors, it never fails to remind me of how much I love the game,” says the 2006 Olympic bronze medallist. “Being on the ice, seeing a young curler’s eyes light up when they have an ‘aha’ moment, whether it’s technical delivery or sweeping, I celebrate with them by high-fiving and jumping up and down. And with some of our team in Calgary and others in Edmonton, it was a good chance just to connect on the fun level.” “I remember as a kid going to curling camp and you’re just giddy,” says Nedohin about the opportunity for club curlers to share the ice and learn from the pros. “We’re pros, yes. But we’re also your person next door. We’re very easy to talk to – and we all have something in common – a passion for the game.” 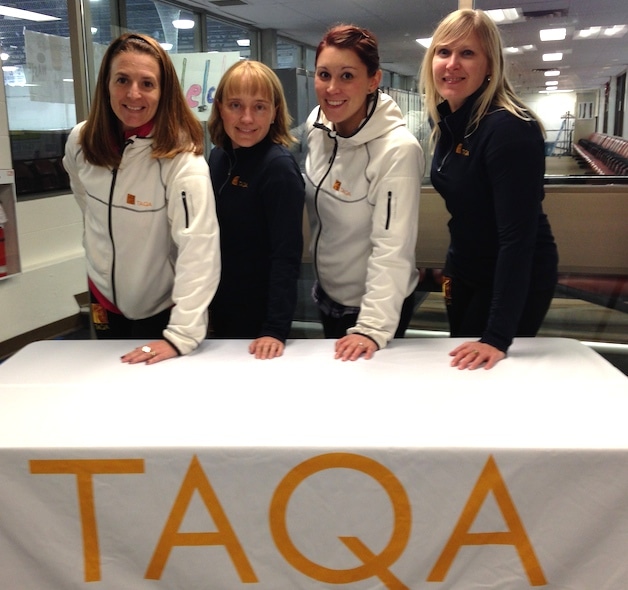