At age 25, Joanne Courtney has already handled most of the high pressure situations in competitive curling. She’s played in the Scotties Tournament of Hearts, the Tim Hortons Roar of the Rings, and countless other high-level events. But this season, she’s facing a new challenge: being the new girl. 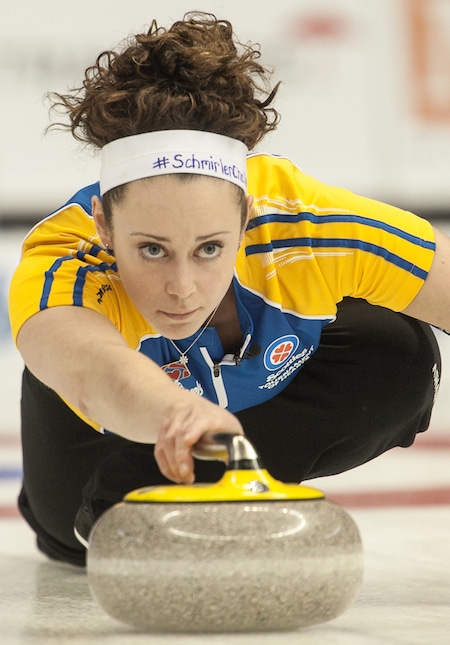 Joanne Courtney, in action last season at the Scotties Tournament of Hearts with Team Alberta, will be at the 2015 Scotties in Moose Jaw, Sask., as a member of Rachel Homan’s Team Canada foursome. (Photo, CCA/Andrew Klaver)

After what many consider a breakthrough season with Edmonton’s Val Sweeting, Courtney was offered a spot on Rachel Homan’s Ottawa-based team. Getting a phone call from the reigning two-time Canadian champ was unexpected to say the least. “I was shocked,” said Courtney, who along with teammates Homan, third Emma Miskew and lead Lisa Weagle are in action this weekend at the World Curling Tour Grand Slam Curlers Corner Autumn Gold in Calgary. “It was a surprise, but upon some reflection, there was no way I could say no.” The Autumn Gold is one of a number of events on a busy weekend of cashspiels as teams chase valuable Canadian Team Ranking System points. Keep checking curling.ca for the latest results from all of the weekend’s events. Sweeting’s team garnered some attention last year after winning the Capital One Road to the Roar pre-trials in Kitchener, Ont., finishing tied for fifth in the Tim Hortons Roar of the Rings, and losing the final of the Scotties. Courtney admits, it was hard to leave a team that seemed to be hitting their stride. “We had such a breakthrough season, and we’re such close friends,” she said. “When you make that much progress with a group of girls,  it’s tough to walk away from it. I had a tough few weeks of deciding, but ultimately, I just couldn’t say no.” Courtney had been impressed with Homan since she was still in juniors. “I was playing in a big ‘spiel with a ladies team as a spare, and these girls were already beating high-level ladies teams, and I couldn’t believe that they were my age,” recalled Courtney. Since then, Homan’s rink has gone on to win a junior national championship, two Grand Slam events, and two Scotties titles… and they’re all just 25 years old. Currently, they’re ranked second in the world, only behind Olympic gold-medallist Jennifer Jones. The position opened up after Homan’s long-time second, Alison Kreviazuk, decided to move to Sweden with her boyfriend, Frederik Lindberg, a member of Niklas Edin’s 2013 world championship and 2014 Olympic bronze-medal team. The reigning Team Canada, however, wasn’t exactly looking to replace Kreviazuk. “We knew we weren’t going to get another Alison,” said Homan’s third Emma Miskew. “We were going to bring in a different person, with a different skill set, and it’s like a brand new team. There are different elements that we all have to bring out in each other.” Aside from a few meetings in competition, Homan’s squad didn’t really know Courtney that well. But after Courtney established herself as one of the best brushers in the game, they figured there was enough potential, that the risk was worth it. “I didn’t know her at all,” said Miskew. “We basically met through text messages over the summer. Now that she’s in Ottawa, we’ve been able to have some good practices, and are getting to know each other pretty well.” “I’ve never been in this position before,” Courtney said. “I’m the only new player, and there’s a lot to learn. Especially when you consider how successful they’ve been, and how long they’ve played together. It’s an adjustment for sure.” Courtney left her job as a registered nurse in Edmonton, and moved to Ottawa in early September. Her brother already lived there, so she not only had some family support nearby, she had a place to live. The team has been practising every day at the Carleton Heights Curling Club, with Courtney and Homan putting in extra sessions. “We’re learning her, and she’s learning about us,” said Miskew. “It’ll be a long process, but we’re just trying to improve each time.” The team won their first three games of the bonspiel, and so far, it seems like things are running smoothly. “So far, so good,” Courtney said. “I’m just looking forward to getting a bit more comfortable, so we can play like a cohesive unit, and really get the best out of each other.” In addition to the Autumn Gold, other women’s WCT events are in Halifax, Basel, Switzerland, and St. Paul, Minn. On the men’s side, there are events in Toronto, Edmonton, Regina, Halifax and St. Paul, Minn. Scores all weekend will be available at curling.ca, while the results of KMC Rocktoberfest in Regina will be found at curlsask.ca.