Going into the weekend, two Winnipeg teams were at the top of the Canadian Team Ranking System lists. After all the dust had settled in Gatineau, Que., and Portage la Prairie, Man., the same two teams were still in the lead — just farther ahead. 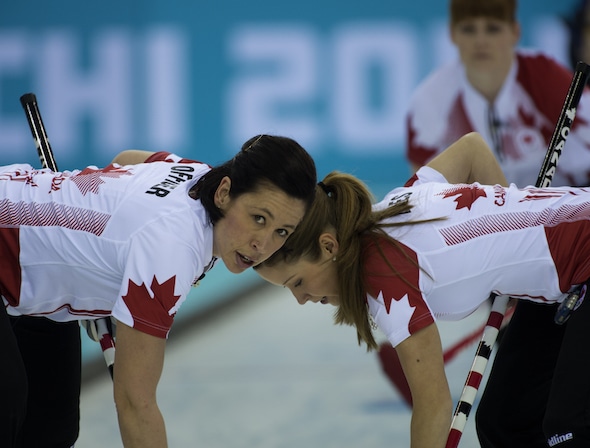 Jennifer Jones, and her team of Kaitlyn Lawes, Jill Officer and Dawn McEwen, cruised through the 24-team Canad Inns Women’s Classic in Portage, beating fellow Winnipeger Jill Thurston in the final. The win earned the Jones rink $15,300 and 35 points, extending its lead in the women’s CRTS and on the World Curling Tour Order of Merit. Thurston earned $10,300 and 25 points. Before the event started, Jones led Ottawa’s Rachel Homan by less than a 10th of a point in the CTRS. With Homan idle on the weekend, Jones’s CTRS lead strengthens, as does her grasp on the world No. 1 status. With the win, she now moves almost a hundred points ahead of Homan, who currently sits second on the WCT rankings. Meanwhile, current men’s CTRS leader, Mike McEwen (also from Winnipeg), won the Challenge Chateau Cartier de Gatineau, defeating the hometown favourite, and former Brier champ, Jean-Michel Ménard. McEwen, along with B.J. Neufeld, Matt Wozniak and Denni Neufeld took home $11,000 and more importantly, 35 CTRS points, extending their lead over world ranked No.1 Brad Jacobs (Sault Ste. Marie, Ont.). With his fourth title in four events, McEwen has won 29 of his first 30 games, and built an impressive lead over the rest of the field. He’s now also within striking distance of Jacobs for top spot on the world rankings. McEwen trails by only seven, and with the first Grand Slam of the year coming up this weekend, there will be plenty of points up for grabs. Ménard took home $7,000 and 25 CTRS points, but sits well back of the leaders. Semifinalists Reid Carruthers (Winnipeg) and Don Bowser (Kingston, Ont.) each earned $5,000 and 20 points. The result moves Carruthers into third on the CTRS. Meanwhile, Brad Gushue (St. John’s) earned 15 points for a quarter-final finish, which moves him up to fifth. Elsewhere, hometown favourite Aaron Sluchinski (third Justin Sluchinski, second Dylan Webster and lead Eric Richard) won the McKee Homes Fall Curling Classic in Airdrie, Alta. beating Cam Culp 8-4 in the final, while in Edmonton, Korean Un-Chi Gim took down Nicky Kaufman of Edmonton for the title at the Crestwood Ladies Fall Classic. Now, all eyes turn to Selkirk, Man., for the Masters, the first Grand Slam of the season. Starting Tuesday night, the top 30 teams, 15 men’s and 15 women’s, will play in pools of five, hoping to qualify for big money, and big points. Grand Slams come with an automatic 40 points for the winner, and 27 points for the finalist. Keep an eye on curling.ca for live scores from this event, along with all other World Curling Tour events next weekend. Besides the Slam, other men’s events are slated for Halifax, Edmonton and Swift Current, Sask. Women’s events are taking place in Halifax and Edmonton.