When all the the world’s top teams show up at the same event, the winner is often determined by who gets hot that week. In the case of Winnipeg’s Mike McEwen, it’s more of a case of staying hot. 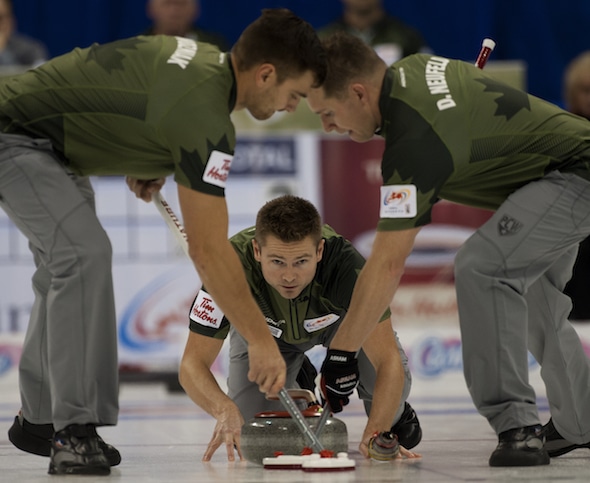 From left, Matt Wozniak, Mike McEwen and Denni Neufeld, along with B.J. Neufeld (not pictured) are off to a torrid start to the 2014-15 season. (Photo, CCA/Michael Burns)

After losing only one game through their first four events, McEwen’s foursome (with B.J. Neufeld, Matt Wozniak, and Denni Neufeld) started this weekend with three more wins at the ultra-competitive Grand Slam of Curling event; the Masters in Selkirk, Man. Only Saskatoon’s Steve Laycock was also undefeated as of Friday afternoon, making that team a lock for a playoff spot in the event. With the field featuring the top 15 men’s teams in the world, the event offers maximum points for Canadian Team Ranking System and World Curling Tour rankings. McEwen looks to extend his CTRS lead, and could possibly pass Olympic champ Brad Jacobs (Sault Ste. Marie, Ont.) for the top spot on the WCT Order of Merit. Jacobs started the Slam with two losses; to Laycock and Calgary’s Kevin Koe, before rebounding with a win over Jim Cotter of Vernon, B.C. Brad Gushue (St. John’s) is also playoff-bound, as his squad finished the round robin with a 3-1 record. In the women’s event, 2014 world champion Binia Feltscher has yet to lose a game. Feltscher, one of three Swiss teams in the event, sits at the top of the table with a 3-0 record. Edmonton’s Val Sweeting (with Winnipeg’s Cathy Overton-Clapham filling in at vice-skip before Lori Olson-Johns fills that role for the remainder of the season after the departure of Andrea Crawford) is 3-1, while the rest of the field is crowded in the middle of the standings at 2-1 or 1-2. Canadian favourites Jennifer Jones (Winnipeg) and Rachel Homan (Ottawa) each suffered a round-robin loss, but will still be able to qualify for the money round. Each team will play a total of four games, and the top eight will advance to the playoff round, which starts Saturday afternoon. Teams with one loss will likely advance, although teams with two losses will probably require some tie-breaker games to qualify. Also going on this weekend: — Halifax is hosting the Dave Jones Molson Mayflower Cashspiel, with a field of 18 teams playing for a share of $24,600. Notable entries in that event are Charlottetown’s Adam Casey (currently sitting 9th on the CTRS), and former Tim Horton’s Brier champ Mark Dacey (Halifax). — In Edmonton, 36 teams (18 men’s and 18 women’s) are playing in the Shamrock Shotgun by DG Valve Systems. Each event has more than $12,000 up for grabs. This will be the first event of the year for Brier fan-favourite Jamie Koe (Yellowknife). Keep your eyes on curling.ca for live scores.