The first weekend of competition is over for the new Team Morris and we were cautiously optimistic about our start. Going 2-2 in the round robin and a loss in a tiebreaker is not the way we want every weekend to go but considering we were entering the first Grand Slam with no prior games under our belts while most teams had between 20 and 30, we were happy with the weekend. 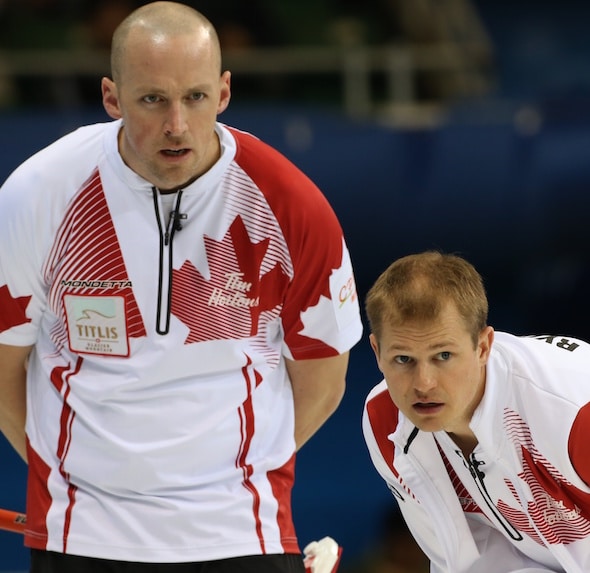 Unlike last season where teams were trying to build towards the Pre-Trials and Tim Hortons Roar of the Rings in November and December, most teams are taking a more measured start to the season and the results showed in Selkirk. Being on the ice, I could see that many teams are not playing at a consistently high level yet, but that’s not to say that they’re far off. I think it’s easy to put a finger on the reason for this inconsistency at the moment — lineup changes. Teams with consistent lineups are in a better position to compete as they’ve been through high-pressure situations as a team and figured out what they needed to do in order to be successful. All team sports are like this: when the talent is close, consistent lineups can be the difference between wins and losses. Think about the amount of games that Brent Laing and Craig Savill played with Glenn Howard over the past 10 years — probably around 1,000. I played around 700 with Kevin Koe in the past eight years. Ben Hebert and Marc Kennedy were probably around 800 with Kevin Martin. All of those former incarnations went through many competitive battles together, so when the pressure was turned up, we all had an idea of not only how to handle ourselves but also our teammates. These new team configurations are in their first 30 to 50 games together, and they have to look at the early season as a learning experience. Team Morris is no different in that we need to find out how to compete and bring the best out of one another when it counts the most. There is a trial-and-error component that will create uncharacteristic misses from some guys to start, and it will be the teams that adapt the quickest that will be the most successful early this season. Team Morris had an extensive team training camp in Calgary before the Grand Slam, which helped us to catch up a bit to the teams that have been in competition mode earlier this season. We had three-a-day practices as well as media events, which enabled us to be together for full days and work not only on our shotmaking, but the all-important communication and team dynamics. I would say that without those three days we would have been lucky to win even one game in Selkirk last week. There were plenty of positives from our first event. Our team was able to withstand some of the highs and lows within each game and were competitive in every game we played. Like everyone other than the winner of the Masters, we would like to have a few shots back. The level of competition is so high now, and the round-robin portion of Grand Slams so short, that the margin for error between qualifying or not is often just one or two shots. There were opportunities in all three of our losses that if we were able to capitalize, we easily would have won any of those games. That, to me, is a positive. It would have been easy to go out there with zero games played under our belts and have a few off ends as a team and get boat-raced. But we withstood those misses, fought our way through and made games of all of them. Certainly, we’re not satisfied with our result but the glass is half full, not half empty right now. The outlook for the next few weeks is practice and physical training in preparation for the next Slam event, as well as the Home Hardware Canada Cup in Camrose, Alta. There is a ton of science these days showing that travel and fatigue of not only the body but the mind can often lead to uncharacteristic results in sports. So, like most teams, we try to fend off some of those fatigue issues by training our bodies, eating healthy (to do that, though, I need to throw out my kids’ Halloween candy!) and practising for our next event. I look at this season as a slow build. There are plenty of huge events on the docket for us and we are just getting started. Make sure we keep getting better every day and the results will come. (Nolan Thiessen is a two-time Canadian champion who plays lead for Team John Morris, AKA Team Canada, who will be competing in the 2014 Home Hardware Canada Cup of Curling, presented by Meridian Manufacturing, Dec. 3-7 in Camrose, Alta.; the 2015 World Financial Group Continental Cup, presented by SecurTek, Jan. 8-11 in Calgary; and the 2015 Tim Hortons Brier, presented by SecurTek, Feb. 28-March 8 in Calgary).