CTRS race heating up this weekend

Just because many of the top teams are taking the weekend off, it doesn’t mean that it’s a quiet time on the World Curling Tour. The truth is quite the opposite — both the men and women have several events going on across the country, featuring some highly-positioned teams on the Canadian Team Ranking System. 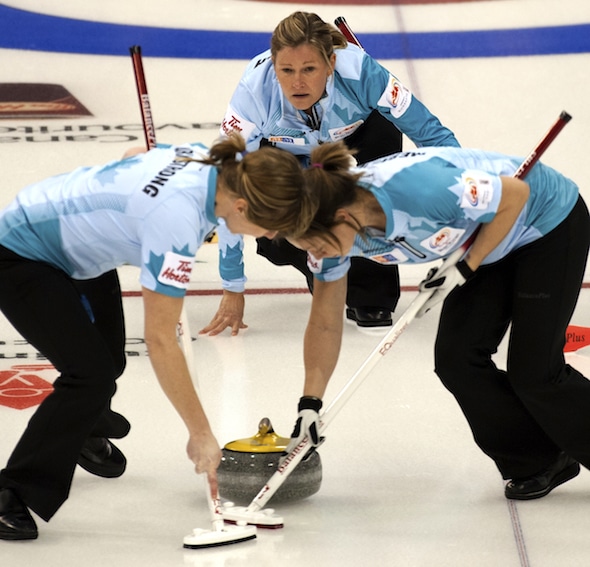 Skip Sherry Middaugh, top, along with teammates Leigh Armstrong, left, Lee Merklinger, and Jo-Ann Rizzo (not shown) will be looking for CTRS points this weekend in Saskatoon. (Photo, CCA/Michael Burns)

After last week’s Grand Slam event, the top three men’s and women’s teams all opted not to play this weekend. Mike McEwen (Winnipeg), Brad Jacobs (Sault Ste. Marie, Ont.), and Brad Gushue (St. John’s) all decided to spend a weekend at home instead of attacking any of this week’s bonspiels. The top three women’s teams, likewise, have also booked the weekend off, with Jennifer Jones (Winnipeg), Rachel Homan (Ottawa), and Val Sweeting (Edmonton) enjoying a break from the competition schedule. What it means for the rest of the CTRS teams, however, is a chance to make up some ground. Five of the six teams mentioned have won at least one WCT event this year, and the exception, Homan, has reached two championship finals, and two semifinals in her four events. So who is looking to make a move? The most obvious answer on the women’s side is Coldwater, Ont.’s Sherry Middaugh. Middaugh is only eight points behind Sweeting for third place in the CTRS standings, and with a strong field assembled in Saskatoon for the Colonial Square Ladies Classic, the third women’s Slam of the season has plenty of points up for grabs. Winnipeg’s Jill Thurston is also in the 31-team field, and hopes to improve on her sixth-place CTRS ranking. The sixth-place CTRS team, Toronto’s Julie Hastings, will be taking part in the Royal LePage OVCA Fall Classic in Kemptville, Ont. The event also features the first appearance of the new-look CIS Canadian champs, now skipped by Breanne Meakin. Until now, the Carleton Ravens women had been relying on a revolving door of guest skips, as they prepare for the Winter Universiadg in Granada, Spain, early next year. On the men’s side, the No. 4 and 5 spots in the standings are occupied by Toronto’s John Epping and Winnipeg’s Reid Carruthers, respectively. Both teams are on the ice this weekend, albeit in completely different corners of the country. Epping will be playing in the CookstownCash presented by Comco Canada Inc., in Cookstown, Ont. The field of 30 teams is fighting for a share of $22,500, and includes Kingston, Ont.’s Don Bowswer (currently 10th on CTRS) and Summerside, P.E.I.’s Adam Casey (CTRS No. 11). Meanwhile, Carruthers is also staying closer to home and playing in the 24-team White’s Drug Store Classic in Swan River, Man. Fellow Winnipeger Jeff Stoughton is also in the draw, and he currently sits eighth on the CTRS list. While this events won’t be for maximum points, Scotland’s David Murdoch adds to the strength-of-field, as he currently sits at No. 10 in the World Curling Tour Order of Merit.  They’ll be playing for a piece of $42,000. Stay tuned to curling.ca for all the scores!