With a big travel week looming, many of the top men’s teams decided to take a week off to refresh before the trek to Sault Ste. Marie, Ont. and the next Grand Slam of Curling event. One team, however, decided to play, (albeit close to home) and the results were sure to make them happy they did. 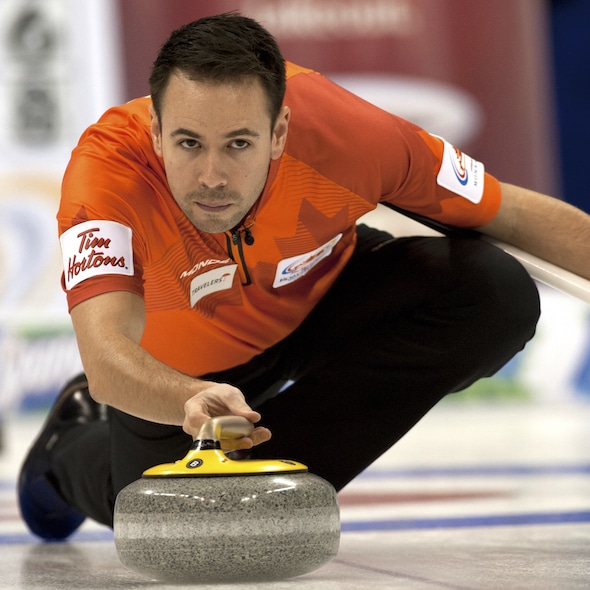 John Epping and his team from Toronto had another good weekend to move up in the Canadian Team Ranking System standings. (Photo, CCA/Michael Burns)

Toronto’s John Epping won the Village of Taunton Mills Gord Carroll Curling Classic in Whitby, Ont., just a short drive from his hometown. With the $5,000 top prize, Epping also gains 12.2 points on the Canadian Team Ranking System. On a week when no other top 10 teams were in action, it allowed Epping (along with teammates Travis Fanset, Patrick Janssen and Tim March) to move up to second place in this season’s CTRS men’s standings. Going into the weekend, Epping sat in fifth place. With the win in Whitby, he was able to pass the idle “Brads;” Gushue of St. John’s, and Jacobs of Sault Ste. Marie. Winnipeg’s Mike McEwen still maintains a healthy lead for first, but the 2-3-4 spots are awfully close, currently separated by just more than 10 points. On the women’s side, Coldwater, Ont.’s Sherry Middaugh lost the final to Susan McKnight, Casey Kidd, Michelle Smith and Joanne Curtis. Middaugh, however, took home enough points to hold on to the second place in the CTRS women’s race she squeaked into last week. Meanwhile in Alberta, the Red Deer Curling Classic hosted 64 teams (32 men’s, and 32 women’s), and the rest of the women’s CTRS leaderboard saw some moves as a result. The event was won by Switzerland’s Alina Pätz, who beat Saskatoon’s Trish Paulsen in the final. Pätz won $10,000 and 22.2 points on the World Curling Tour Order of Merit. Other notable names include Edmonton’s Heather Nedohin, whose quarter-final finish earned her team 9.25 points and pushed her up the list into eighth place on the CTRS. Ottawa’s Rachel Homan missed the playoffs and only earned 3.053 points. A playoff finish would have put her back ahead of Middaugh in second place. Winnipeg’s Jill Thurston also missed the playoffs but gained a few points as well. She currently sits in fifth on the CTRS. In Red Deer’s men’s event, Kerrobert, Sask.’s Josh Heidt (with Brock Montgomery, Matt Lang  and Dustin Kidby) beat Edmonton’s Brendan Bottcher in the final, earning $10,000 and 13.25 points. Bottcher took home $7,500 and 9.275 points, which situates him just outside the top 10, in 13th place.