Winnipeg’s Mike McEwen sent a pair of emphatic messages to the rest of the men’s field that will be in Camrose, Alta., in a couple weeks for the 2014 Home Hardware Canada Cup, presented by Meridian Manufacturing. 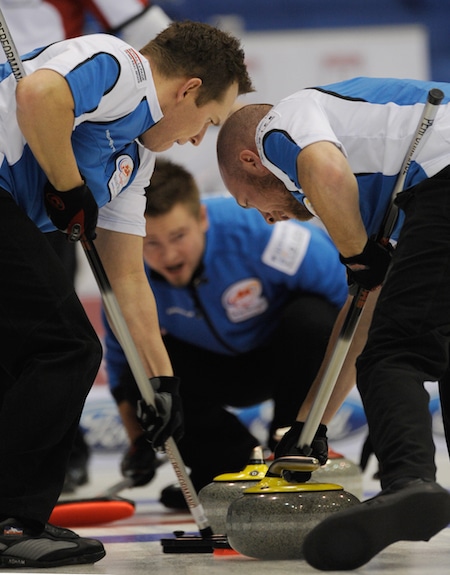 By winning the Grand Slam of Curling’s National on Sunday in Sault Ste. Marie, Ont., McEwen — backed up by third B.J. Neufeld, second Matt Wozniak and lead Denni Neufeld — showed not only what most people already knew: that Team McEwen holds the hottest hand in the country, as evidenced by its fifth triumph of the 2014-15 season in six events entered (that sixth event was a second-place finish at the Grand Slam Masters). Additionally, though, the McEwen team heads to Camrose for the opening event of the 2014-15 Season of Champions knowing it can grind when it needs to. After a so-so 3-2 round-robin performance in the Soo, Team McEwen scraped into the last eight, and then picked up steam, capping the weekend with a 5-2 win over hometown favourite Brad Jacobs in the final. At the end of the round robin in Sault Ste. Marie, there were some other big surprises. Winnipeg’s Reid Carruthers went through the round robin undefeated, and Edmonton’s Brendan Bottcher, the 2012 World Junior Men’s champ, wasn’t far behind with only one loss. In a field like this, having two young teams at the top of the list next to Penetanguishene, Ont.’s Glenn Howard was a bit of a shock. McEwen and Jacobs, meanwhile, barely made it into the playoff round. But when all the dust had settled, it seems that everything was back to normal. Jacobs knocked off Carruthers in the quarter-finals, then Bottcher in the semis. McEwen beat Saskatoon’s Steve Laycock, then Howard, to reach the final. Whether they knew it or not, there was more at stake in the Jacobs-McEwen final than $23,000 and 40 points on the Canadian Team Ranking System (and World Curling Tour Order of Merit) standings. McEwen had already built a huge lead in the CTRS men’s standings this season, while Jacobs was sitting at the top of the Order of Merit, a list based on two seasons worth of results, though he was less than two points ahead of McEwen. So when Jacobs’ last runback-double attempt jammed in the four-foot, and McEwen stole a point, he not only won the game, the bonspiel, the points, and the money, but he also became the new World Curling Tour No. 1 team. Jacobs, meanwhile, earned $14,000 and 27 CTRS points. He still has a solid grasp on second place in the CTRS, and still only trails McEwen by 12 points on the WCT list, a number that can easily be made up over the next few events, including the Home Hardware Canada Cup, which begins Dec. 3 at Encana Arena, and the next Grand Slam event the following week in Yorkton, Sask. As for Carruthers, his 18 points keep him in fifth place on the CTRS, while Bottcher’s semifinal finish gained him 22 points, and moves him up to 12th on the CTRS list. Elsewhere: — In Morris, Man., Canadian University champ Matt Dunstone’s U of Manitoba team won the Dekalb Superspiel and took home $10,000. His team of Jim Coleman, Dan Grant and Chris Gallant are headed to Spain for the Winter Universiade in February. — Also in Morris, Tracy Horgan’s team from Sudbury, Ont. (rounded out by Jenn Horgan, Jenna Enge and Amanda Gates) upset Olympic champ Jennifer Jones of Winnipeg with an 8-7 extra-end victory in the Dekalb women’s final. Team Jones continues to lead the CTRS women’s standings. — In Spruce Grove, Alta., Calgary’s Shannon Kleibrink (third Lisa Eyamie, second Nikki Smith, lead Darah Blandford) stole three in the second end en route to a 7-6 win over Sherwood Park’s Heather Nedohin to take home a $3,000 winner’s cheque. — In Victoria, New Westminster, B.C.’s Dean Joanisse (with Paul Cseke, Jay Wakefield and John Cullen) beat Sean Geall in the final of the Vancouver Island Shootout, taking home $3,500.