Heather Nedohin of Edmonton scored triples in the third and ninth ends to knock off Olympic champion Jennifer Jones of Winnipeg 9-5 Wednesday in the second draw of the Home Hardware Canada Cup, presented by Meridian Manufacturing.

“We went into this looking at who we were playing, No. 1 and No. 2, saying if we could split today we would be very happy,” said Nedohin, who beat Val Sweeting of Edmonton 12-6 in the morning draw. “So this is an added bonus, a great start to the competition.”

Two-time defending Scotties Tournament of Hearts champion Rachel Homan of Ottawa beat Allison Flaxey of Listowel, Ont., 11-3 for her second win of the day and Mike McEwen of Winnipeg continued his sizzling hot play with a 9-3 win over Brad Gushue of St. John’s, N.L. 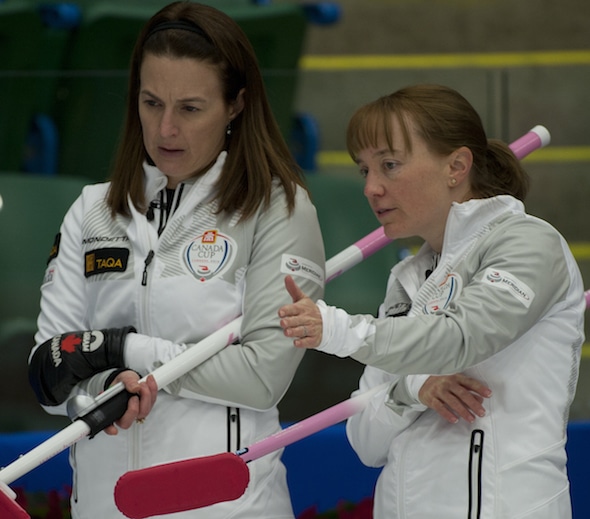 In the other afternoon games, Sherry Anderson of Saskatoon, skipping Stefanie Lawton’s team, scored two in the first end and stole singles in the second and third en route to an 8-3 win over Sherry Middaugh of Coldwater, Ont., and Team Canada, skipped by John Morris of Calgary, needed to steal singles in the final two ends to edge Jim Cotter of Vernon, B.C. 6-4. 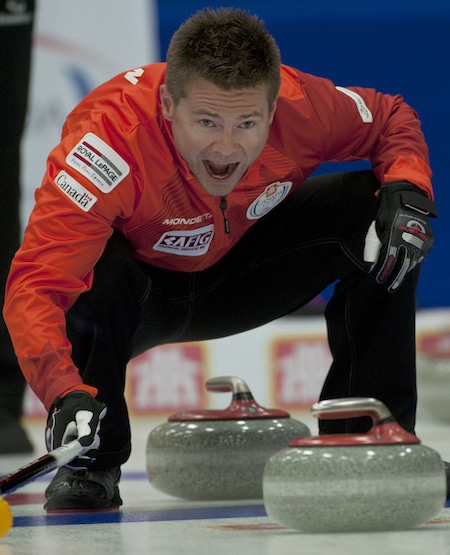 “Two barnburners,” said Morris who lost a tough 7-6 extra end game to Glenn Howard of Penetanguishene, Ont. In the morning. “Had a tough loss in our first one, played better against Jimmy. So 1-1, it’s something to build on.” Morris, who skipped Cotter’s team last year, got the win when Cotter’s final shot, an attempted raise angle takeout, came up narrow. “They made a bunch (of tough shots) but that last one was so tough, a run angled double, that’s not the shot you dreamed of to win games,” said Morris. Homan scored deuces in the second and third ends to grab control of her game against Flaxey. “It was a really good game, a hard battle. Just kind of one shot at the end that made it look lopsided, but it was a close game,” said Homan, who scored five in the seventh to seal the win. “They got a three (in the fourth); she made a nice in-off to make it really close (4-3). We kept battling; we had to work hard for our points.” Homan beat Middaugh 7-4 in the morning In the other morning’s opening draw games, Kevin Koe and his revamped Calgary team beat Olympic gold medalist Brad Jacobs of Sault Ste. Marie, Ont., 8-4 and Glenn Howard of Penetanguishene, Ont., nipped Morris 7-6 in an extra end. The Home Hardware Canada Cup continues with today’s final draw at 6:30 p.m. MST. TSN/TSN2 and RDS2 will provide complete coverage of the Hardware Canada Cup. Click here for the broadcast schedule. The Home Hardware Canada Cup format calls for the men’s and women’s teams to play a three-day round robin, with the first-place teams advancing to their respective finals on Sunday, while the second- and third-place teams meet in semi-finals on Saturday, after any required tiebreakers, to determine the other finalists.