Olympic champions Brad Jacobs and Jennifer Jones escaped with extra-end victories Friday morning to remain right in the mix for playoff spots at the Home Hardware Canada Cup, presented by Meridian Manufacturing. Jacobs improved his record to 3-2 when Mike McEwen came up short with his last-rock draw attempt to allow Jacobs to steal two in the 11th for a critical 7-5 win. Sherry Anderson of Saskatoon was also short with her last-rock draw and Jones didn’t need to throw her final stone in a 7-6 victory. 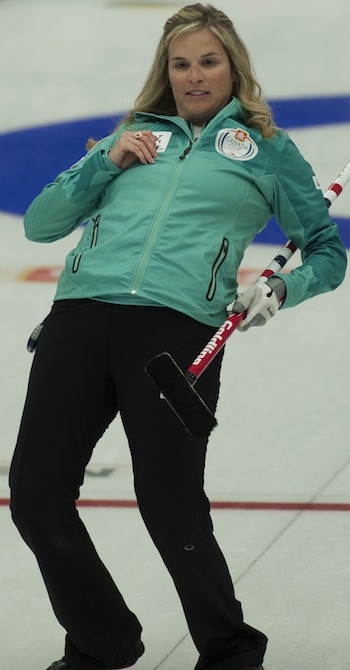 In the other games Brad Gushue of St. John’s, N.L.. didn’t need to throw his final stone in a 5-4 win over Jim Cotter of Vernon, B.C., and Val Sweeting of Edmonton scored deuces in the sixth and 10th ends to beat winless Allison Flaxey of Listowel, Ont., 8-5. The results left Glenn Howard of Penetanguishene, Ont., alone in first place at 3-1 going into today’s final two draws. McEwen, Gushue and Jacobs are tied at 3-2. Kevin Koe of Calgary is 2-1, John Morris of Calgary 1-3 and Cotter 1-4. On the women’s side Rachel Homan of Ottawa is unbeaten at 4-0 with Heather Nedohin of Sherwood, Park, Alta., at 3-1. Sweeting and Jones are at 3-2, Anderson is 2-3 with Sherry Middaugh of Coldwater, Ont., at 1-3 and Flaxey 0-5. Although he got the victory, it was a frustrated Jacobs who spoke to the media afterwards. “I was upset most of the game to be honest,” said Jacobs, who was wide with his final shot in the 10th when he had a chance for two to win. “That’s just how the game went for me, it was a frustrating game for me. Even the guys (third Ryan Fry, second E.J. Harnden and lead Ryan Harnden), our whole team was frustrated all game. But we’ve been playing long enough that we know no matter what, you’re not going to give up. “We were kind of sloppy to be honest, but whatever, it’s over with, we got the win and we’re happy.” McEwen, who began the week 3-0 but has lost his last two games, was also upset after his final draw was horribly short. 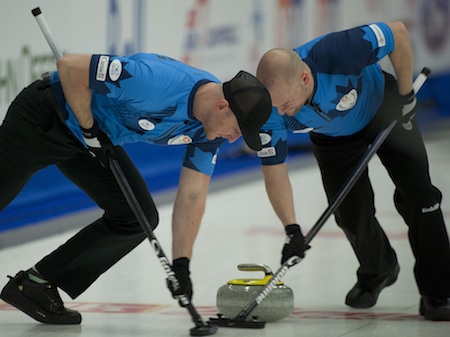 “Little bit of a slow path?” he suggested when asked what happened to the shot. “I don’t usually miss shots by 10 feet. That’s a shot I probably make 80 per cent of the time.” Jones was a much happier skip after Anderson, who curled only 62 per cent, left her draw short to hand the win to Jones and her team of third Kaitlyn Lawes, second Jill Officer and lead Dawn McEwen. “Another nail-biter, which is good, it builds character,” said Jones.” It’s fun to win the close ones. We weren’t as sharp as we wanted to be but we have a big game tonight (against Homan) and we control our own destiny, which is what you want. If we win we’re in the playoffs, which was our goal at the start of the week.” The Home Hardware Canada Cup continues today with draws at 1:30 and 6:30 p.m. MST. TSN/TSN2 and RDS2 will provide complete coverage of the Hardware Canada Cup. Click here for the broadcast schedule. The Home Hardware Canada Cup format calls for the men’s and women’s teams to play a three-day round robin, with the first-place teams advancing to their respective finals on Sunday, while the second- and third-place teams meet in semi-finals on Saturday, after any required tiebreakers, to determine the other finalists. For ticket information for the 2014 Home Hardware Canada Cup, go to https://www.curling.ca/2014canadacup-en/tickets/.