They traded singles for most of the game, but when Val Sweeting finally got a chance at her elusive deuce in the women’s final of the Home Hardware Canada Cup, presented by Meridian Manufacturing, the Edmonton skip jumped all over it. After Rachel Homan’s last-rock takeout attempt in the ninth end hung wide and failed to remove Sweeting’s shot rock from the rings, Sweeting calmly drew for a go-ahead deuce to break a 3-3 tie. A steal in 10 sealed the deal as Sweeting capped a 6-3 win over Homan’s Ottawa team in a rematch of last February’s Scotties Tournament of Hearts final in Ottawa, won by Homan. 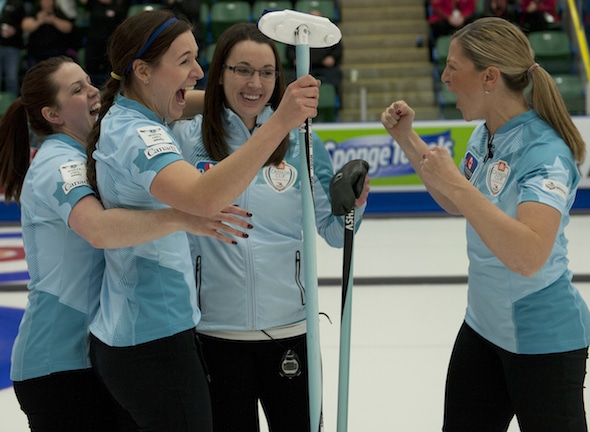 “A great team game, probably our strongest game all week, start to finish and from lead to skip,” said a jubiliant Sweeting after high-fiving part of the large crowd of supporters from her hometown of Vegreville, just east of Edmonton. The win was worth $14,000 for her Edmonton-based team — third Lori Olson-Johns, second Dana Ferguson and lead Rachelle Brown — and gave them berths in the 2015 World Financial Group Continental Cup Jan. 8-11 in Calgary and the Road to the Roar Pre-Trials. Homan’s Ottawa team, with third Emma Miskew, second Joanne Courtney and lead Lisa Weagle, pocketed $9,000 for reaching the final. Teams also received $2,000 for each round-robin win (Homan had five; Sweeting had four) In the pivotal ninth, Sweeting hid her first rock behind cover and Homan, the reigning two-time Scotties champion who had her first stone come up short, had her final stone stay wide, leaving the Edmonton skip an easy draw for two. “I thought it would curl there, the inturn close to the line and it just never came up,” Homan said of her shot. “It just kind of tracked halfway down the sheet and never came up.” Sweeting got a break in 10 when a raise-takeout try by Olson-Johns was narrow but she got just enough of a Homan counter to allow her skip to sweep it out of the house. Homan’s first shot, an attempted freeze, came up way short and her second shot rubbed a guard and let Sweeting steal. “I’m not sure what happened to my first one, it grabbed,” said Homan. “We hadn’t seen it curl like that the whole game. It definitely shouldn’t have curled that much and stop dead. “But I had a shot with my last one and didn’t quite get there.” 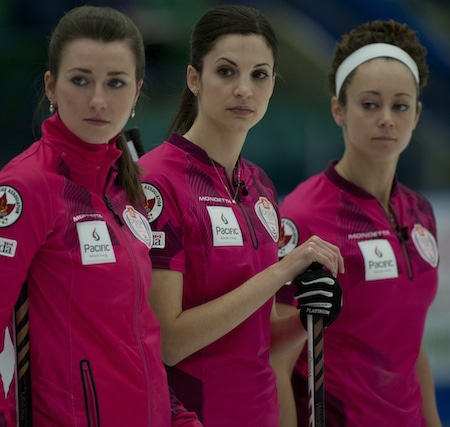 Homan counted singles in the third, sixth and eighth ends. Sweeting scored one in the fourth, stole one in the fifth, added a single in the seventh, got the game-changing deuce in nine and one in 10. The Sweeting foursome were the more aggressive team all game, going into the house early and dictating much of the game. “That was our plan, we really wanted to control the game, keep the pressure on until we won it,” said Brown, adding the team felt comfortable from the opening rock. “We felt like we were getting our rocks in pretty good position and Dana and I felt like we had our draw weight in our back pocket so that felt really good.” Sweeting played Saturday’s semifinal on the same sheet of ice and Olson-Johns said that was a contributing factor, along with the team’s relaxed attitude during the final. “We played fantastic as a team, we were calm and confidence,” said the third, who joined the team shortly into the season to fill a void when Andrea Crawford returned to New Brunswick. “We really knew the ice and the rocks. I think playing the semifinal was really to our advantage today.” The men’s final between Mike McEwen of Winnipeg and reigning Olympic champion Brad Jacobs of Sault Ste. Marie, Ont., is scheduled for 5 p.m. MT/7 p.m. ET, and will be televised by TSN2.