Pivotal steals were the key Thursday morning to Team Canada scoring two wins for a 2-1 margin in the opening draw of the 2015 World Financial Group Continental Cup of Curling, presented by SecurTek Monitoring Solutions. 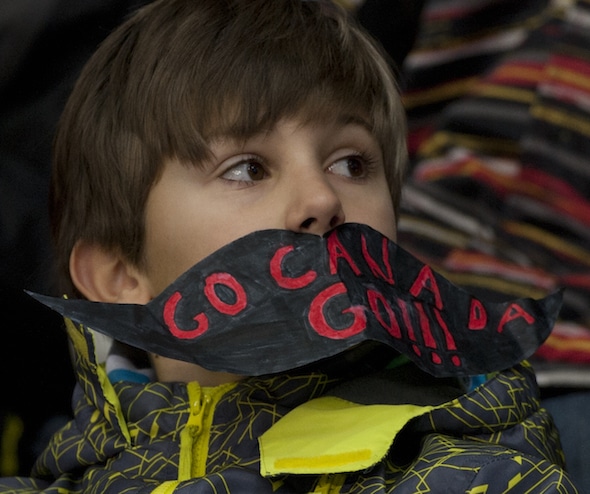 The fans were showing their allegiances on Thursday at the Markin MacPhail Centre in Calgary. (Photo, CCA/Michael Burns)

Olympic champion Brad Jacobs of Sault Ste. Marie, Ont., stole a single in the sixth and used the two-point margin to ease to a 4-1 win over Niklas Edin of Sweden. Two-time reigning Scotties champion Rachel Homan of Ottawa stole one in the seventh and three more in the eighth to beat Margaretha Sigfridsson of Sweden 7-4. Anna Sidorova and her Russian team stole seven points en route to a 7-3 win over Val Sweeting of Edmonton for Team Europe’s only point. “We played two back-to-back great ends,” Jacobs said of the fifth and sixth ends that gave him, third Ryan Fry, second E.J. Harnden and lead Ryan Harnden a 3-1 lead. “We kind of got a little unlucky (in the fifth) where we figured we had a chance for two or three. Doubled theirs out, doubled our own out and rolled out for only one. 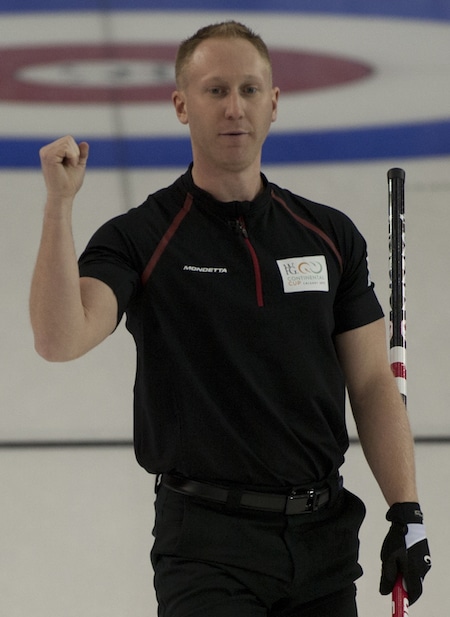 “We followed it up with another great end in sixth. It was a back and forth battle that could have gone either way. A nail biter to the end. We had to make our final shot to give them nothing.” Homan came through a tight port with her final stone to hit and stay for two in the second and after giving singles to Sigfridsson in the fourth and fifth ends, got one back in the sixth and the key steal in the seventh. With her final stone in the seventh, Homan made a good double kill and rolled to a biter at the back of the 12-foot behind cover. “It was a good team shot,” she said. “It was swept well and a really good line call by Emma (Miskiw). We were able to get a roll behind. “We’re always counting points and we got two out of three so we just have to keep winning.” Sweeting struggled with her shots early, opening the door for Sidorova to steal four points in the first three ends – singles in the first and second and two in the third. “We made every important shot so it was really difficult for them to play against us,” Sidorova said of the shotmaking by herself, third Margarita Fomina, second Aleksandra Saitova and lead Ekaterina Galkina. Sweeting got on the board in the fourth when she made a relief-filled draw to the button against two Russian stones. The relief didn’t last long, however. In the fifth, Sweeting’s final shot left Sidorova a chance at a double kill for two and the Russian skip didn’t miss to take a commanding 6-1 lead. “We didn’t get our shots in good spots.” Sweeting said of the early struggles. “They were guarding it up and we didn’t have much. We struggled and that’s not how we wanted to start. “But we felt good the last two ends. Need to carry forward and do more for the team.” In the Continental Cup format there will be 18 team games, nine men and nine women, with each win worth one point. Players also participate in mixed doubles, singles and skins matches with a total of 60 points available to be won over the next four days. First team to 30.5 wins the tournament. Mixed doubles go this afternoon, 1:30 MT. Oskar Eriksson/Ekaterina Galkina (Europe) plays Carter Rycroft/Lori Olson-Johns (Canada); Niklas Edin/Anna Sidorova (Europe) take on Ryan Fry/Emma Miskew (Canada) and Torger Nergård/Marya Prytz (Europe) play E.J. Harnden/Rachel Homan (Canada). For ticket and other event information, visit www.curling.ca/2015continentalcup-en/ For the complete schedule, go to: www.curling.ca/2015continentalcup-en/draw-schedule/ TSN (RDS2 in French), the exclusive television network for the CCA’s Season of Champions, will provide complete coverage of the WFG Continental Cup. This story will be posted in French as soon as possible at www.curling.ca/2015continentalcup-fr/