Canada holds six-point lead after singles at the Continental Cup

Team Canada women swept their matches against Team Europe but the Europeans bounced back to take 2.5 of three points against the men in singles competition Friday at the 2015 World Financial Group Continental Cup presented by SecurTek Monitoring Solutions. 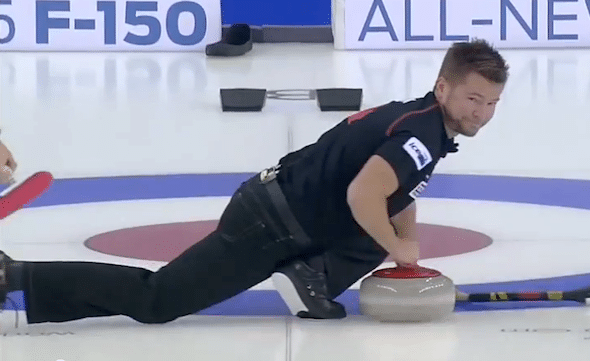 Val Sweeting made a nearly perfect draw to the button to kick off the Canadian women’s day and then repeated it to finish the singles and give Canada a 3-0 sweep. The results left Canada leading 12-6 with the first team to 30.5 points winning the tournament. 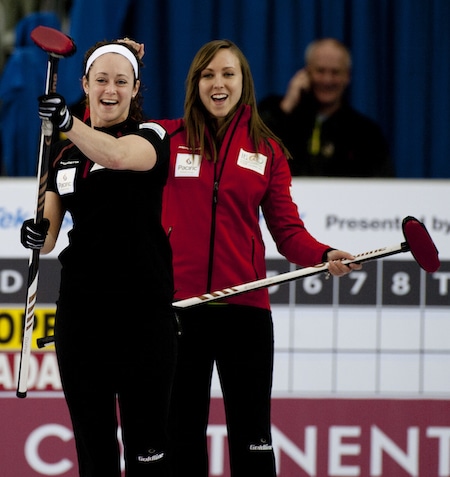 “I was very first and very last so both felt like a lot of pressure, but the (sweepers) judged them well,” Sweeting said of her shots. “To get that first one was good. We weren’t sure what to expect going in. The energy out there is crazy.” The energy and the fun was evident throughout the afternoon, punctuated by Mike McEwen’s spinorama delivery on his final shot, a draw to the button through a port. He made the shot for the maximum five points but it still wasn’t enough to get his team a win. “That was unbelievable,” Team Canada coach Randy Ferbey said of McEwen’s shot that had his teammates laughing, jumping and high-fiving and the crowd erupting in loud cheers. “Most people can’t hit the house naturally.” In the midst of that sentence McEwen joined Ferbey in the interview, prompting the four-time world champion to add, with a laugh, “for him to do that that was a pretty lucky shot.” “Lucky?” laughed McEwen, whose move was reminiscent of Jeff Stoughton’s entertaining spinorama. “He’s got to come up with his own gimmick instead of copying these people,” chuckled Ferbey. Hey, replied McEwen, that’s the only move I have.

“It wasn’t as pretty looking as Stoughton’s spinorama, but I made it. We couldn’t win so why not try something cool.” Canadian teams skipped by Sweeting, Rachel Homan and Jennifer Jones all won their matches that included six different shots – draw to the button, raise take-out, raise, hit and roll, double takeout and draw thru a port. Points are awarded for how well each shot is made and the winning team after all six shots earned a single point in the standings. After the Canadian women swept their matches the European men almost did the same. “Hol-lee, you want to play the guys for us, that’s pretty much what we were saying,” McEwen said of the reaction of the men on the bench. “They certainly put the pressure on us.” David Murdoch defeated John Morris 21-13, Thomas Ulsrud beat McEwen 23-22 and Niklas Edin and Canada’s Brad Jacobs tied 16-16. Sweeting beat Margaretha Sigfridsson 19-16, Rachel Homan beat Anna Sidorova 20-11 and Jennifer Jones defeated Eve Muirhead 20-14. “The women did really well, they got us the lead,” said Ferbey. “The Europeans came back against the men, got a couple of points but overall we’re in a very good position right now.” Team play takes back to the ice at 6:30 p.m. MT with Murdoch playing Jacobs, Sidorova versus Homan and Edin taking on Morris. For ticket and other event information, visit www.curling.ca/2015continentalcup-en/ For the complete schedule, go to www.curling.ca/2015continentalcup-en/draw-schedule/ TSN (RDS2 in French), the exclusive television network for the CCA’s Season of Champions, will provide complete coverage of the WFG Continental Cup. This story will be posted in French as soon as possible at www.curling.ca/2015continentalcup-fr/