Thomas Ulsrud and his Norwegian teammates entertained the crowd by dancing in their Comfyballs underwear, and they did provide Team Europe with their only point of the evening, but Team Canada continued to roll along and pile up the points at the 2015 World Financial Group Continental Cup, presented by SecurTek Monitoring Solutions. 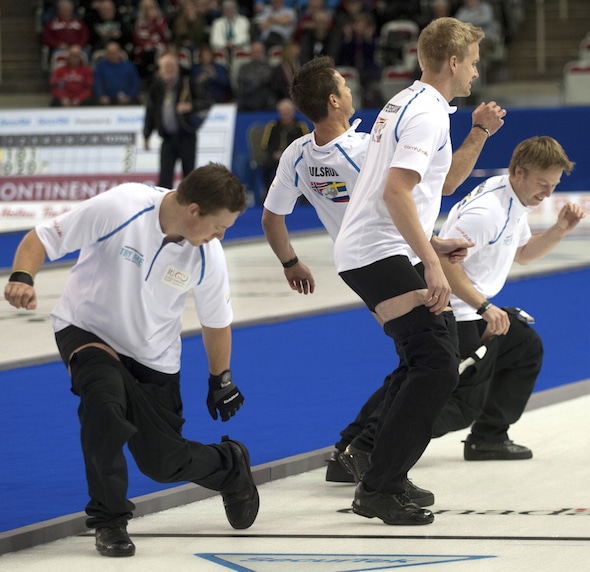 Team Ulsrud was in a dancing mood on Saturday night. (Photo, CCA/Michael Burns)

Ulsrud, third Torger Nergård, second Christoffer Svae and lead Håvard Vad Petersson, stole three in the second end and cruised to an 8-3 win over Olympic champion Brad Jacobs of Sault Ste. Marie, Ont.. But red-hot Mike McEwen and his Winnipeg crew scored deuces in the second, fourth and fifth ends to beat Niklas Edin of Sweden 7-4 and Val Sweeting of Edmonton continued her strong play with a 7-2 win over Margaretha Sigfridsson of Sweden. The two points gave Canada seven for the day – to two for Team Europe – and increased their lead to 22-8. Ulsrud added three points in the fourth and the game was pretty much over so he and his mates used the fourth-end break to drop the pants a little and dance for the crowd, partly to entertain and partly to promote the underwear. “We decided to do it before the game. Then we looked out, holy crap, there’s a full house tonight,” Ulsrud said. “Team Europe is not doing too well. We needed something to happen and this is our only gig.” As for the game, Ulsrud said his team got a lucky break early that led to the three. 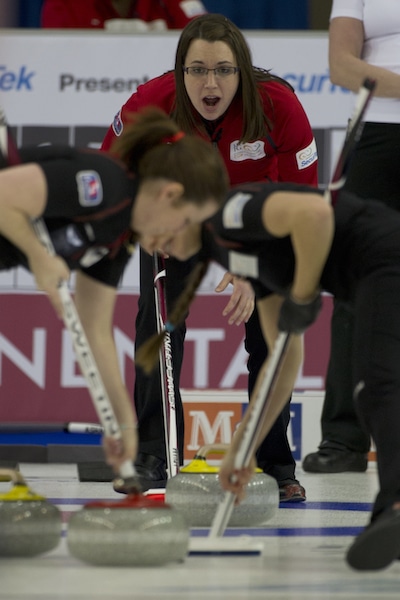 “One of those games,” he said. “Brad was throwing on a fresh path I guess and ended up light and we got three counters. He’s going to make that shot 95 out of 100 times at least.” One sheet over McEwen stole two in the fifth and one in the sixth to take control of his game and get Canada back on the winning track. “Early booking for Vegas (site of next year’s Continental Cup), Team Ulsrud,” chuckled McEwen. “Not to curl, to perform there.” McEwen, third B.J. Neufeld, second Matt Wozniak and lead Ben Hebert, forced Edin to take a single in one and three while they got back-to-back deuces. “We had comfortable control, managed to turn around the hammer in the first end,” added McEwen. “I made a gross draw for two, the boys swept that perfect and we won the measure as Ulsrud was dancing with his pants down. A matter of two ends the game went from being tight to being over.” The four-day event wraps up with Sunday’s skins matches, at 11:30 a.m. and 6:30 p.m. MT, worth 30 points. Team Canada captain Randy Ferbey and coach Rick Lang, as well as Team Europe captain David Hay and coach Peja Lindholm, made their picks for Sunday’s skins games. Here’s the lineup: 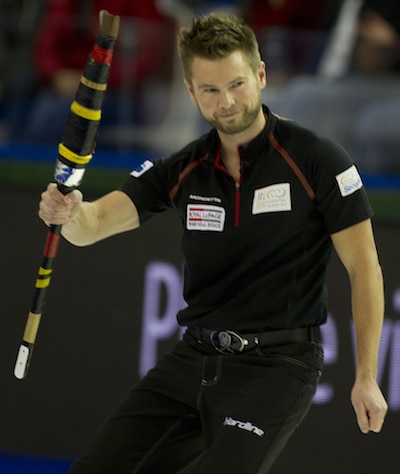