The championship already in their pocket, Team Canada closed out the 2015 World Financial Group Continental Cup, presented by SecurTek Monitoring Solutions, by winning 9.5 of 15 skins points Sunday evening to add $25,000 to their winning prize money. 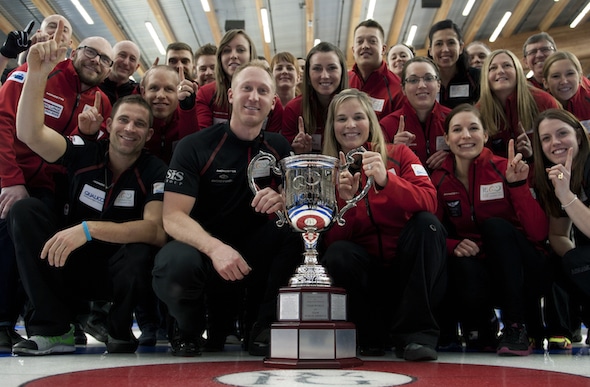 Canada had clinched the Continental Cup title by sweeping the three morning skins games to push their points total past the required 30.5 and lay claim to $52,000 in prize money. There was an additional $13,000 in money for the team that won the most skins points and on Sunday the World Financial Group bumped that up with a $12,000 bonus to the side that won the evening’s final draw. With Team Canada having won 10.5 of the 15 skins points in the afternoon draw, the teams skipped by Brad Jacobs, Jennifer Jones and John Morris needed to win five more to claim the $13,000. They did that by the sixth end, leaving only the bonus money to be decided and when Morris made a successful tapback to win the final skin in his mixed game even that was secured.

The 9.5 points gave Canada a final winning margin of 42-18. “I was surprised by the margin but we expected to win,” a jubilant Team Canada coach Rick Lang said before Nolan Thiessen and Morris popped the corks on the champagne. “We knew we had a great team. I thought they would challenge us more because they also have top international teams.” Morris, who played the mixed match with Val Sweeting, Dana Ferguson and Thiessen, said the victory could be attributed to the talent of the Canadians, the way they played all week and how they pulled together as a team. “It’s amazing the difference in the dressing room from the first day to the last,” he said. “The first day everyone is sort of minding their Ps and Qs, tiptoeing around the room. By the last day it’s no holds bared, lots of good energy, a bit of chirping and positive vibes.” And it was, added Jones, the Olympic champion, a four-day methodical march to victory. Jones ended halving her match with Europe’s Eve Muirhead, with each team claiming 2.5 points. “You could tell we were sharp from the get-go,” said Jones. “And we never let up. It was coming together as a team, getting that camaraderie and great energy. And we had that from Day 1. We got on a roll and never looked back.” In the other evening affair, Olympic champ Brad Jacobs beat Europe’s David Murdoch 4.0-1.0 in a rematch of the Olympic men’s final in Sochi. Team Canada had clinched the Cup title earlier in the day when Mike McEwen, Rachel Homan and Pat Simmons skipped their teams to equal 3.5 to 1.5 victories in the morning skins matches. That gave Canada 32.5 points. 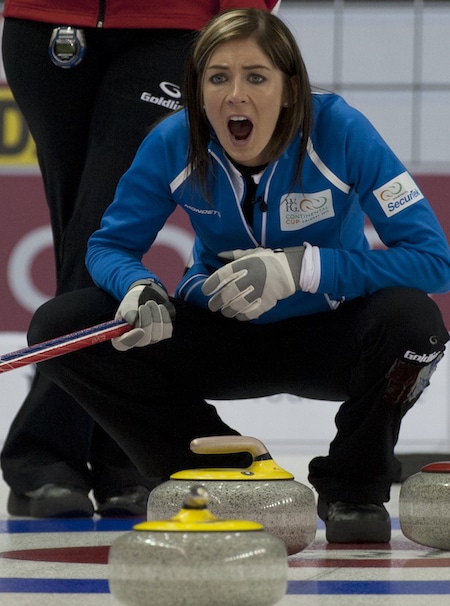 The four-day tournament had 60 points up for grabs in team, mixed doubles, singles and skins competition. Canada led 7-2 after the first day and steadily increased its lead, to 15-6 on Day 2 and 22-8 heading into Sunday. “Every draw it’s been like they got one point, we go two,” McEwen said of the Team Canada showing this week. “We kept on them and then we had a few sweeps. We really haven’t had a draw where things didn’t go right.” For head coach Rick Lang it was four days of watching his players perform with such precision they rarely allowed Team Europe to entertain any thoughts of winning the Cup. “Right from the very start, Val Sweeting went out there (in the first draw) and didn’t play as well as she could, but then came back and won every point she could since. We had no weak links in our chain whatsoever. It was so comfortable sitting behind the boards watching them perform the way they performed.” Next year’s World Financial Group Continental Cup will be held in Las Vegas Jan. 14-17. For information or to purchase tickets for that event go to: https://www.curling.ca/2016continentalcup/tickets/ This story will be posted in French as soon as possible at www.curling.ca/2015continentalcup-fr/