At the relatively tender age of 15 in a field filled with late teens, Sadie Pinksen still has to be considered a veteran at the 2015 M&M Meat Shops Canadian Junior Curling Championships. 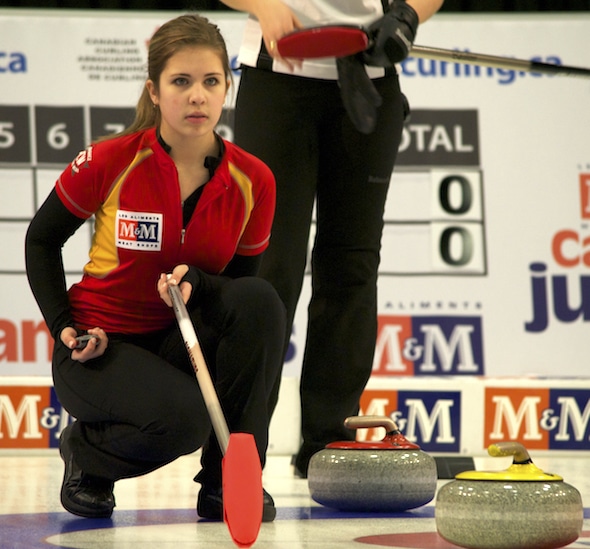 In her third trip to the M&M Meat Shops Canadian Juniors, Pinksen, a Grade 9 student at Inuksuk High School in Iqaluit, Nunavut, is still searching for her first career win, but based on a promising early outing on Saturday at the Corner Brook Civic Centre — an 11-3 loss to traditional powerhouse Ontario, skipped by Chelsea Brandwood of Hamilton — it seems just a matter of time before that historic first triumph. “I think we’ve improved a lot technically and with our team dynamics,” said Pinksen, who bowed 17-3 to Alberta in her debut two years ago in Fort McMurray, Alta. “We’ve gotten a lot closer as a team, and a lot better on the ice. We’re more comfortable. Two years ago, we hadn’t played on arena ice before and we were all really nervous. Now, we’re a lot more confident.” Pinksen is backed up here by third Christianne West (15), second Katie Chislett Manning (15) and lead Kaitlin MacDonald (16), the newcomer to the team — meaning, the Nunavut girls still have up to five years of eligibility at the Canadian Juniors. “They have a lot of talent; unfortunately they don’t have competition (in Nunavut),” said coach Donalda Mattie, a native of Antigonish, N.S., who replaced former coach Lynn Kreviazuk due to the latter’s participation with Team Canada at the upcoming Winter Universiade in Spain. “They have a lot of work to do, but they do a lot of work on their own. I was pretty pleased with the way they played the game today; they made a lot of good shots. And I expect they’ll get better as the week goes on. The attitude is very positive; Lynn has done a lot of great work with the team.” That is evident in watching the constantly smiling Pinksen handle herself, both on and off the ice. “I think we didn’t really know what to expect two years ago. It really was overwhelming,” she conceded. “Now, we know what the other curlers are like. It’s still a learning experience, but we’re getting more competitive now than we were two years ago.” In other Draw 1 women’s play on Saturday, defending champ and reigning world junior champ Kelsey Rocque (with a new lineup in front of her) of Alberta opened with a 14-5 win over the Yukon’s Bailey Horte; 2013 Canadian champ Corryn Brown and her B.C. team needed an extra end to shade Prince Edward Island’s Veronica Smith 9-8; Manitoba’s Beth Peterson scored three in the ninth end en route to an 8-7 triumph over Northern Ontario’s Krysta Burns; and 2014 bronze-medallist Mary Fay of Nova Scotia rolled to an 8-3 victory over Carina McKay-Saturnino of the Northwest Territories. 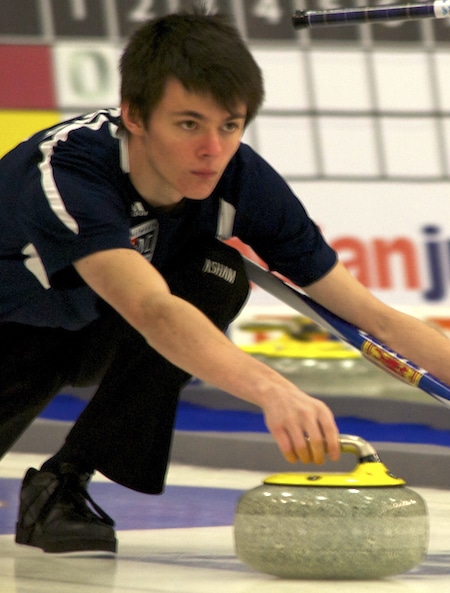 In men’s play, Quebec’s Felix Asselin put a huge six on the scoreboard in the eighth end in a 9-6 win over B.C.’s Paul Henderson; Ontario’s Mac Calwell beat Nunavut’s Kane Komaksuitiksak 16-3; and Nova Scotia’s Matthew Manuel stole a seventh-end deuce to beat Newfoundland/Labrador’s Greg Smith 8-2. Action at the 2015 M&M Meat Shops Canadian Juniors continues Saturday with draws at 2:30 p.m. and 7:30 p.m. (All times NST; EST plus 90 minutes). Round-robin games are taking place at both the Corner Brook Civic Centre and the Corner Brook Curling Club. Once the top three teams for each gender have been determined, all playoff games will be played at the Civic Centre. The men’s and women’s playoffs will be televised by the TSN network as well as RDS2 (French). The women’s semifinal is scheduled for Saturday, Jan. 31, at 1:30 p.m. NST/noon EST, with the gold-medal game at 8 p.m. NST/6:30 p.m. EST. This story will be posted in French as soon as possible at https://www.curling.ca/2015juniors-fr/ The full scoreboard can be viewed at https://www.curling.ca/scoreboard/