CORNER BROOK, N.L. — There was plenty of potential for Tyler Smith to look back on his Tuesday at the 2015 M&M Meat Shops Canadian Junior Curling Championships as a disaster. 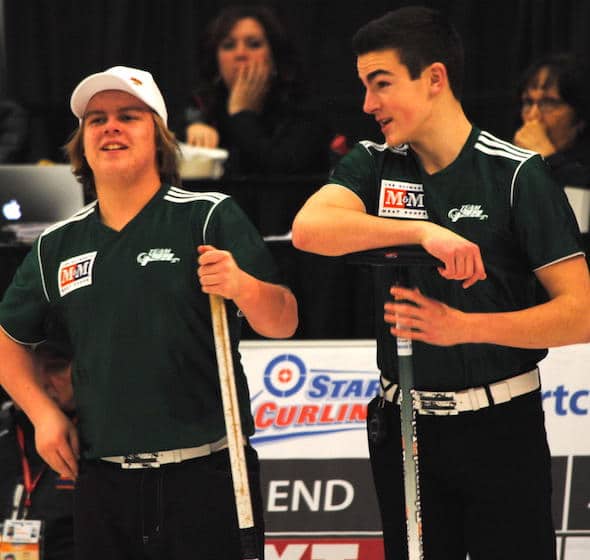 In his team’s final preliminary round-robin game, absolutely nothing went right, and the Montague-based team (third Brooks Roche, second Dylan Lowery, lead Ryan Lowery, coach Kevin Smith, Tyler’s dad) was shut out 7-0 by Northern Ontario’s Tanner Horgan (Sudbury) to finish the preliminary round at 2-4. That dropped them into a two-round tiebreaker scenario in a bid to earn a berth in the eight-team Championship Round, and the first of those tiebreakers, against Joe Wallingham of the Yukon (Whitehorse), hardly started ideally as the northern squad stole three in the third end to go up 4-1. 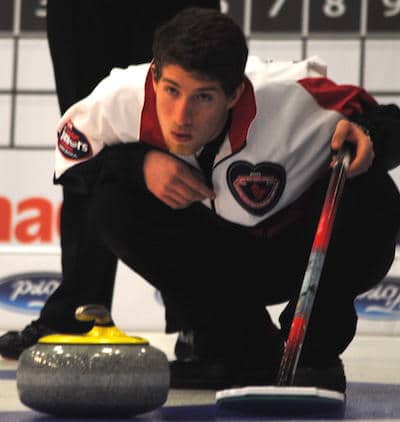 But the 16-year-old Smith would rally the troops, bouncing back with a game-tying three in the fourth end en route to a 6-5 victory that wasn’t secured until Wallingham flashed on his last-rock takeout attempt in the 10th end, giving P.E.I. the steal and the win. The result means P.E.I. will have a rematch with Northern Ontario Wednesday at 10 a.m. (all times NST; EST plus 90 minutes) for the final Pool B berth in the Championship Round, while the final Pool A berth will be decided at the same time between Ontario’s Mac Calwell (Belleville) and Nova Scotia’s Matthew Manuel (Halifax). “We weren’t very happy with the way we played this afternoon, and we had a bad third end there (against the Yukon), but other than that we played pretty solid,” said Smith. “We always fight hard when we get down. We’re kind of known for never giving up, and always coming after them. We got down three and we thought, ‘Hey, it’s no big deal.’ We were down three to them (Yukon) a couple days ago and came back and won. Down three? We should be able to do it again.” Smith skipped P.E.I. at the 2013 M&M Meat Shops Canadian Juniors in Fort McMurray, Alta., and arrived in Corner Brook with higher expectations than his first go-round. 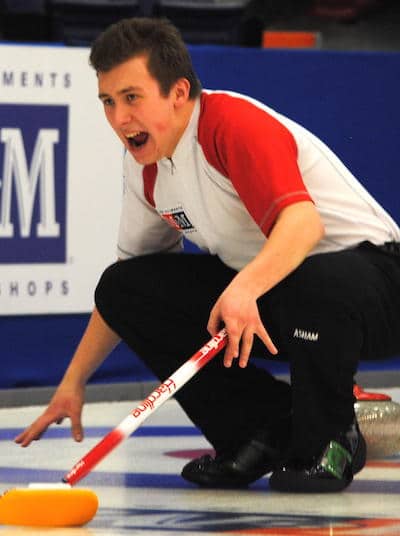 “My second time being here, one of our goals was to make the championship pool,” he said. “We’re not expected to win it, but we still have a chance. That’s all you need.” Also still with a chance is Calwell’s Ontario team, which held off home-province hopeful Greg Smith of Newfoundland/Labrador 9-7 in the other tiebreaker. Caldwell, with third Kurt Armstrong, second (and twin brother) Morgan Calwell, lead Matthew Pretty and coach Greg Pretty, scored a big three in the sixth end and stole one more in the seventh to take control and help salvage something from what has been a disappointing few days here. “We’ve been struggling — mostly it’s been me having a hard time adjusting,” said Calwell. “Just one of those off weeks. You can’t be perfect all the time. But that game started to feel a little bit better. It’s good to still have a chance here. We just have to win that second tiebreaker.” The top three teams in each pool, plus two teams with the next best won-lost records, advance to the Championship Round for a further four-game partial round robin from Wednesday through Friday, with their earlier records carried forward. Meanwhile, the six teams of each gender that didn’t qualify for the Championship Round meet in a Seeding Round to determine ranking for the 2016 Canadian Juniors in Stratford, Ont. Clear to the Championship Round out of Pool A were Quebec’s Félix Asselin (Montreal, 6-0), defending champ Braden Calvert of Manitoba (Winnipeg; 5-1) and B.C.’s Paul Henderson (Victoria; 4-2). Moving on from Pool B were Alberta’s Karsten Sturmay (Edmonton; 5-1), Saskatchewan’s Jacob Hersikorn (Saskatoon; 5-1) and 2014 silver-medallist Rene Comeau of New Brunswick (Fredericton; 5-1). The women’s advancers from Pool A were defending world champ Kelsey Rocque of Alberta (Edmonton; 6-0); Ontario’s Chelsea Brandwood (Hamilton; 5-1); Quebec’s Émilia Gagné (Jonquière/Alma; 4-2) and Manitoba’s Beth Peterson (Winnipeg; 3-3). Advancing out of Pool B were 2013 gold-medallist Corryn Brown of B.C. (Kamloops; 6-0), last year’s bronze-medallist Mary Fay of Nova Scotia (Chester; 4-2), Saskatchewan’s Kristen Streifel (Saskatoon; 4-2) and New Brunswick’s Justine Comeau (Fredericton; 3-3). In the women’s Seeding Round games Tuesday night, the Yukon’s Bailey Horte (Whitehorse; 2-5) downed Carina McKay-Saturnino (Inuvik; 1-6) 5-3, while P.E.I.’s Veronica Smith (Cornwall; 3-4) was a 10-4 winner over Nunavut’s Sadie Pinksen (Iqaluit; 0-7). Action at the 2015 M&M Meat Shops Canadian Juniors continues on Wednesday Championship and Seeding Round draws at 10:30 a.m., 2:30 p.m. and 7 p.m. (all times NST; EST plus 90 minutes). Round-robin games are taking place at both the Corner Brook Civic Centre and the Corner Brook Curling Club. Upon completion of the Championship Round, the top team of each gender advances to its respective final, while the second- and third-place finishers meet in a semifinal to determine the other finalist. All members of the non-playoff teams will compete in a Mixed Doubles competition on Saturday and Sunday. All playoff games will be played at the Civic Centre. The men’s and women’s playoffs will be televised by the TSN network as well as RDS2 (French). The women’s semifinal is scheduled for Saturday, Jan. 31, at 1:30 p.m. NST/noon EST, with the gold-medal game at 8 p.m. NST/6:30 p.m. EST. This story will be posted in French as soon as possible at https://www.curling.ca/2015juniors-fr/ The full scoreboard can be viewed at https://www.curling.ca/scoreboard/