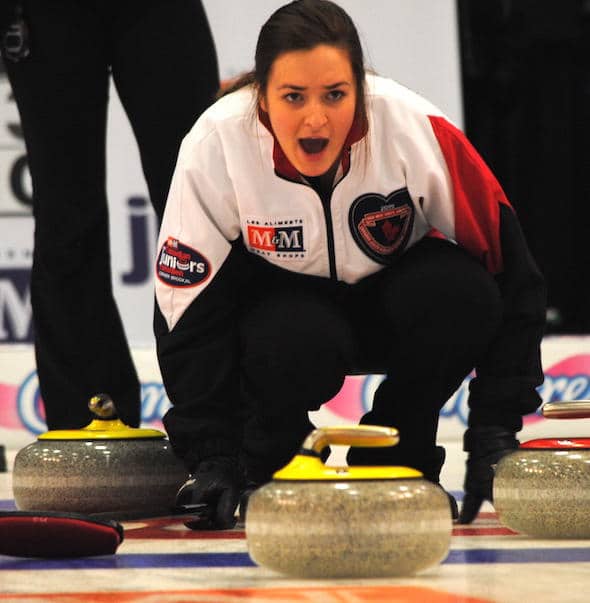 Ontario skip Chelsea Brandwood and her team from Hamilton picked up a big win over B.C. on Thursday. (Photo, Amanda Rumboldt)

A sloppy 10th end led to Ontario giving up a stunning four to Saskatchewan’s Kristen Streifel to lose 10-8. The postgame discussion focused on what went right and wrong. And then it was done — on to the next challenge. And Brandwood’s team from Hamilton — third Claire Greenlees, second Brenda Holloway, lead Danielle Greenlees, coach Todd Brandwood — rose to that challenge very nicely, thanks very much, outplaying Corryn Brown’s B.C. team (Kamloops), the 2013 Canadian champs, en route to a 9-6 win. “I think it was important for the whole team to recover from that loss and get us back on the winning track,” said Brandwood, who was scored at 93 per cent for the game. “We played amazing in that game, so it really brought us back up.” 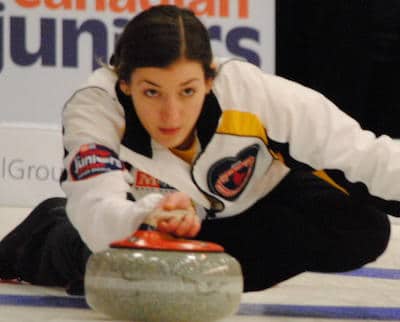 With the win, Ontario improved to 6-2 in the Championship Round, alone in third place in the eight-team pool behind reigning world champ Kelsey Rocque of Alberta (7-0) and B.C. (7-2). The top three teams make the playoffs on Saturday. Any lingering nerves from Wednesday’s loss, and the shock of giving up a three to B.C. in the fourth end, were erased quickly when Ontario struck for three of its own in the fifth, and closed the win out with deuces in the eighth and 10th ends. “I’m guessing there were some nerves on the team this morning, but we just wanted to get right back in it and go back to the way we were playing before and not like last night,” said Brandwood, a 19-year-old student at Wilfrid Laurier University. “I’m really proud of the girls; they played amazing.” In other action, Manitoba’s Beth Peterson won her third straight Championship Round game, eking out a crucial 6-5 extra-end win over Saskatchewan. Manitoba improved to 6-3 with the win after going an indifferent 3-3 in the preliminary round; Saskatchewan is now 5-4 and needing significant help to snare a playoff spot. “It’s pretty huge to go 3-0 in the first three games of the Championship Round, but we knew needed to win out, so we’re pretty excited about that,” said Peterson, whose Winnipeg team is rounded out by third Robyn Njegovan, second Melissa Gordon, lead Breanne Yozenko and coach Jack Gordon. “We’re just playing with almost a little bit of desperation. You know yo need to win, so you’re a little more focused — you know you have to make the shot perfectly, and you’re a little less relaxed, and more intense. It’s a good mix.” In the other women’s game, New Brunswick’s Justine Comeau (Fredericton) improved to 4-4 with a 10-5 win over Quebec’s Émilia Gagné (Jonquiére/Alma; 4-5). In men’s action, meanwhile, Alberta’s Karsten Sturmay (Edmonton) moved into a tie for top spot in the Championship Round with idle Braden Calvert of Manitoba at 7-1 with an 8-2 win over Ontario’s Mac Calwell (Belleville; 2-6), taking control with stolen deuces in the third and fourth ends. 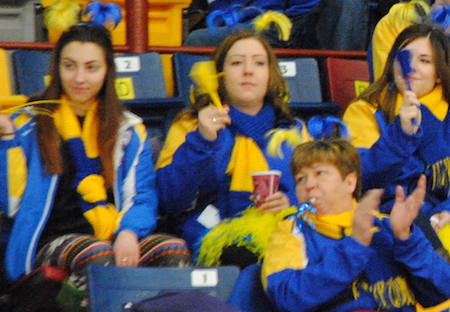 Alberta fans were out in force on Thursday. (Photo, Amanda Rumboldt)

In the other game, Saskatchewan’s Jacob Hersikorn (Saskatoon; 6-3) kept his playoff hopes alive with a 12-5 win over Quebec’s Félix Asselin (Montreal; 6-2), scoring six in the seventh end. Action at the 2015 M&M Meat Shops Canadian Juniors continues on Thursday with draws at 2:30 p.m. and 7 p.m. (all times NST; EST plus 90 minutes). Round-robin games are taking place at both the Corner Brook Civic Centre and the Corner Brook Curling Club. Upon completion of the Championship Round, the top team of each gender advances to its respective final, while the second- and third-place finishers meet in a semifinal to determine the other finalist. All members of the non-playoff teams will compete in a Mixed Doubles competition on Saturday and Sunday. All playoff games will be played at the Civic Centre. The men’s and women’s playoffs will be televised by the TSN network as well as RDS2 (French). The women’s semifinal is scheduled for Saturday, Jan. 31, at 1:30 p.m. NST/noon EST, with the gold-medal game at 8 p.m. NST/6:30 p.m. EST. This story will be posted in French as soon as possible at https://www.curling.ca/2015juniors-fr/ The full scoreboard can be viewed at https://www.curling.ca/scoreboard/