CORNER BROOK, N.L. — Chelsea Brandwood was a little concerned about the potential for a bad sleep the night before her women’s playoff appearance at the 2015 M&M Meat Shops Canadian Junior Curing Championships. 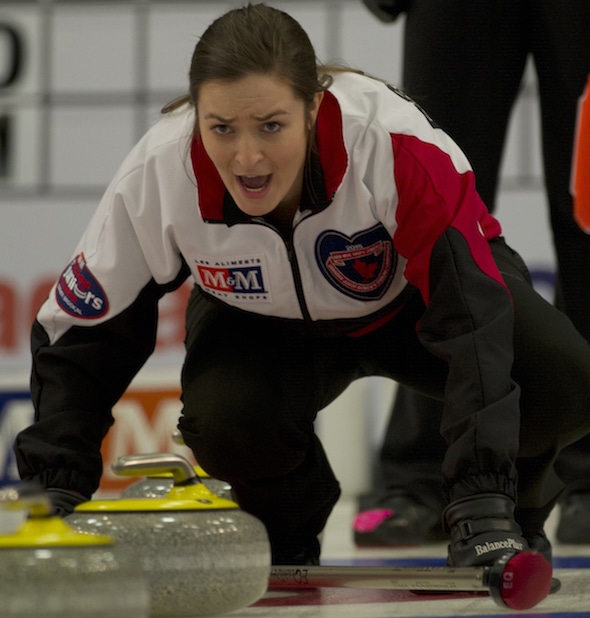 Hard to blame her, really — her Hamilton team was about to make its first appearance on national television, and to win gold would have to beat, in succession, the 2013 and 2014 champions at this event.

In fact, she had nothing to worry about with her sleep concerns — “I slept pretty well, actually,” said the 19-year-old Wilfrid Laurier University arts student. “We were pretty tired after the banquet.” As for the daunting task on the ice? Well, one down and one to go, after Ontario took down 2013 Canadian champ Corryn Brown of B.C. (Kamloops) 9-4 in the women’s semifinal at the Corner Brook Civic Centre. “We were definitely nervous going into the first end, so we just played it open and tried to keep it clean,” said a happy Brandwood, whose Hamilton team is rounded out by third Claire Greenlees, second Brenda Holloway, lead Danielle Greenlees and coach Todd Brandwood. “And after that? We didn’t even notice the cameras were there. We just forgot about it and played our game.” With the win, Ontario will take aim at its first Canadian junior women’s title — and just its fourth overall — since Ottawa’s Rachel Homan prevailed in 2010 at Sorel-Tracy, Que.. Ontario will take on defending Canadian and world champion Kelsey Rocque of Alberta (Edmonton) in the final at 8 p.m. (all times NST/ EST plus 90 minutes) on TSN/RDS2, with the winner advancing to the world junior championships, beginning Feb. 28 in Tallinn, Estonia. It was a tight game over the first seven ends, but the wheels started falling off for B.C. in the seventh when Brown rolled out on an open hit for two. In the eighth, Ontario played a near-perfect end, leaving Brandwood with a draw for three, and the insurance was provided in the ninth when Brown was heavy on her draw for a single looking at three Ontario counters. “You know what? I had a good feeling about it the whole way,” said Brandwood. “We were really in control of most of the game. And we always love to try to go for it in eighth to get a deuce. Fortunately for us, she missed her last shot and we got our three, which was great. The girls made it easy for me.” One Canadian champ out of the way, Ontario will take on another in the final against Rocque, who won both Canadian and world gold a year ago — albeit with a different team. 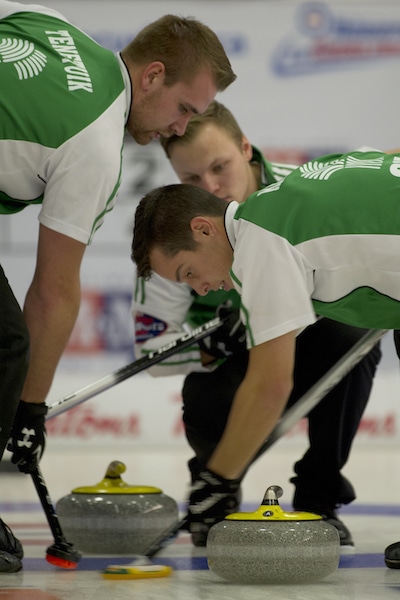 “We’re just going to play our same game — play like we did just now,” said Brandwood. “We played amazing there, and I’m so proud of the girls, proud of how far we’ve come in our first nationals. We know that it’s in our hands tonight. As long as we play the way we’ve been playing? I have no doubt about what we can do.” Meanwhile, Saskatchewan’s Jacob Hersikorn (Saskatoon) made a double takeout with his final rock of the 10th end to score a winning deuce in an 8-7 victory over Quebec’s Félix Asselin (Montreal) in a men’s tiebreaker. The win sent Hersikorn, third Cole Tenetiuk, second Brady Kendel, lead Brandon Leippi and coach Laurie Burrows to the semifinal Sunday at 1:30 p.m. on TSN/RDS2 against New Brunswick’s Rene Comeau (Fredericton). The semifinal survivor will move on to the gold-medal game Sunday at 8 p.m. against defending champ Braden Calvert of Manitoba (Winnipeg). Saskatchewan had surrendered a stolen deuce to Quebec in the ninth when Hersikorn’s last-rock takeout appeared to catch some debris. But he made no mistakes on the game’s final rock. “I was pretty excited that they left us a shot for the win,” said Hersikorn. “After they stole the deuce, our coach just said, ‘Play your game. You know how to get two.’ And even one wasn’t the end of the world. Nine was just an unlucky break. But we never quit; we never let off the gas. Just two more games to go now — hopefully we keep playing the way we are and that will be enough to win on Sunday.” All members of the non-playoff teams are competing in a Mixed Doubles competition on Saturday and Sunday. This story will be posted in French as soon as possible at https://www.curling.ca/2015juniors-fr/ The full scoreboard can be viewed at https://www.curling.ca/scoreboard/