Canada will not compete for a medal at the 2015 World Wheelchair Curling Championship after losing its final two games of the round-robin and finishing 4-5 at the Kisakallio Sports Institute in Lohja, Finland. 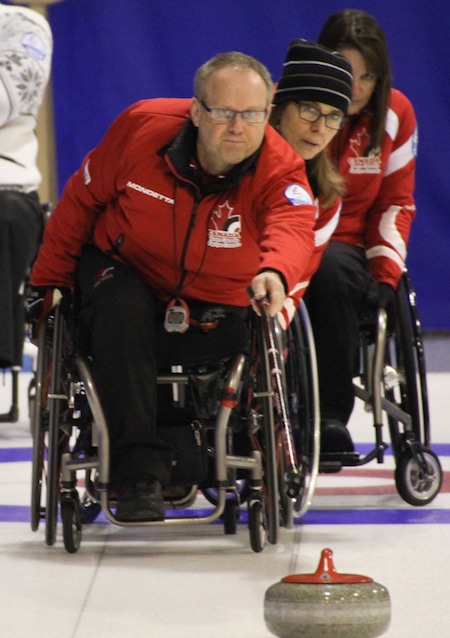 It is the first time Team Canada — skip Mark Ideson of London, Ont. (throwing lead rocks), vice-skip Ina Forrest (Armstrong, B.C.; throwing fourth stones), third Dennis Thiessen (Sanford, Man.), second Sonja Gaudet (Vernon, B.C.), alternate Marie Wright (Moose Jaw, Sask.), and coach Joe Rea (Prince George, B.C.) — will miss the World Wheelchair Curling Championship playoffs since 2012. Canada won gold at the 2013 championship and at last year’s 2014 Paralympic Winter Games. Canada started Day 5 with a 7-6 loss to Radoslav Duris of Slovakia. Canada had the hammer in the last end with the score tied 6-6. However, the Eastern European nation managed a steal of one point and squeaked out a 7-6 victory. “Another heartbreaker,” Ideson said of the result. “All our losses have been down to the wire, the last rock. We stuck to our game plan. They played well, they made shots when they needed to, they had a good game.” Canada opened the game with a three-ender, but Slovakia responded with a single in the second and a three-point steal in the third. Canada recovered by scoring one in the fourth, allowing a single in the fifth and gaining a 6-5 lead by scoring a deuce in the sixth. Slovakia scored one in the seventh before stealing the all important single in the final end. The loss put Canada in a must-win situation against the undefeated Russian team skipped by Andrey Smirnov during the afternoon draw. Russia emerged as 6-4 victors. Canada opened the game against Russia by blanking the first end, scoring two in the second and stealing a point in the third. Russia erased Canada’s lead by scoring a single in the fourth, and stealing three points in the fifth end. Canada scored one in the sixth to tie the game 4-4, but Russia rallied back with a point in each the seventh and eighth ends to secure the win. Canada finished sixth overall in the round-robin. Russia, China, Finland, and Slovakia will advance to Thursday’s playoff games and compete for gold. Live scoring, standings, and the live stream from the 2015 World Wheelchair Curling Championship can be found at: https://wwhcc2015.curlingevents.com/.