MOOSE JAW — Tracy Horgan of Northern Ontario stole two on the third end and another two on the fourth en route to a 10-5 win over Kerry Galusha of the Northwest Territories on the opening night of the Scotties Tournament of Hearts. 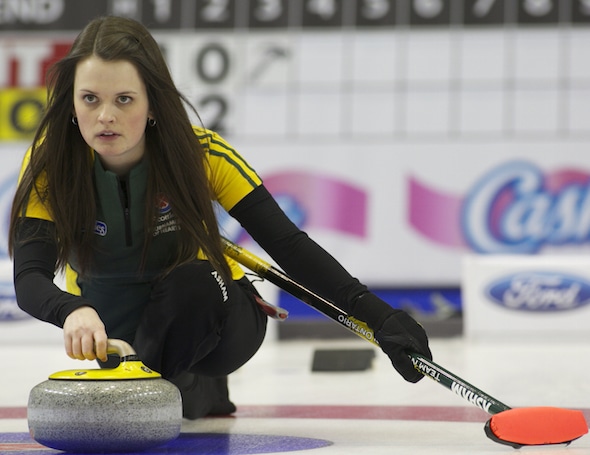 Northern Ontario’s Tracy Horgan got off to a great start in the pre-qualifying round of the 2015 Scotties Tournament of Hearts. (Photo, CCA/Andrew Klaver)

The game was the first of four in pre-qualifying competition. One of Horgan, Galusha or Sarah Koltun of Yukon will be included when the 12-team Canadian women’s curling championship begins Saturday. Horgan is wearing Northern Ontario colours at this Scotties, after skipping the Ontario team to a 4-7 mark in 2012 in Red Deer, Alta. Northern Ontario is in the Scotties for the first time. Horgan stole two on the third end when Galusha rolled out on a takeout facing three, and pilfered two more in four when the Territories skip came up a little light on a draw to the four-foot. Horgan put the game away with a steal of two on the seventh. Horgan said there was no real turning point in the game. “We were consistent throughout the game and put our rocks in good places, and put some pressure on the other team,” the Sudbury skip said. “We found our draw weight early and got onto the ice. We really liked the ice out there. It’s curling a lot, which we like.” Galusha was disappointed with her team’s play. “That’s the worst start we could have ever expected,” she said. “We have worked far too hard to come out and play like that. It was really disappointing. We looked like beginners out there.” Galusha, a 12-time Scotties participant, said her team played better in the second half of the game, and will take that as a positive heading into Friday’s game against Yukon. “We have another chance tomorrow. And if we win that game, we might be in the final. We’ll use that game as practice. We didn’t give up. We still had our chances. “The Horgan team played really well, (but) we put no pressure on them.” Galusha said it was an unusual experience being the only game on the ice. “The crowd was amazing. I couldn’t believe all the people out there. Team Jennifer Jones was watching us and Team Rachel Homan. We weren’t our best. We’re not usually the only ones on the ice,” she said with a laugh. “So it was a little weird for us.” Horgan is backed by third Jenn Horgan, second Jenna Enge and lead Amanda Gates. Galusha’s team consists of third Megan Cormier, second Danielle Derry and lead Shona Barbour. The pre-qualifying competition continues Friday with games at 8 a.m. and 3:30 p.m. In the first game, Northern Ontario meets Yukon, followed by Yukon against Northwest Territories. The top two teams play Saturday at 2 p.m. in a winner-take-all game to join main draw. Should the teams end in a three-way tie, the teams with the two best pre-game last-shot-draw distances will go to the qualifying game. For ticket and other event information, visit https://www.curling.ca/2015scotties-en/ For the complete schedule, go to https://www.curling.ca/2015scotties-en/draw-schedule/ TSN (RDS2 in French), the exclusive television network for the CCA’s Season of Champions, will provide complete coverage of the 2015 Scotties Tournament of Hearts. This story will be posted in French as soon as possible at https://www.curling.ca/2015scotties-fr/