The curling gods smiled on Heather Strong in her first win Sunday. Her Newfoundland/Labrador team’s second victory was all her own doing. 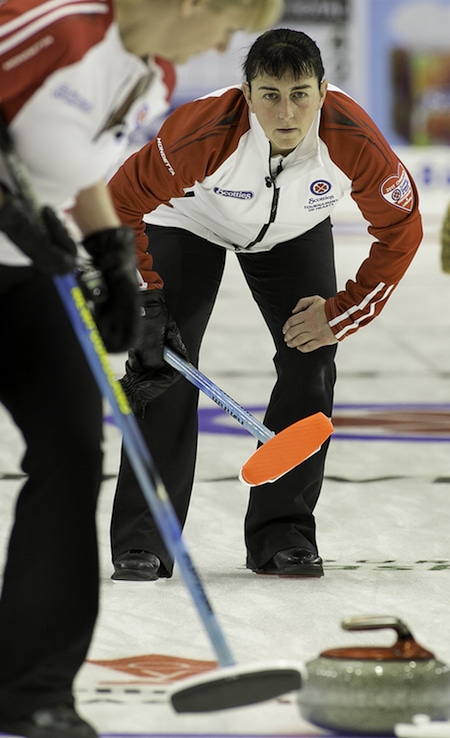 After stealing two on the 10th end to defeat New Brunswick 5-4 on the morning draw, Strong turned in a, well, strong performance in defeating Prince Edward Island’s Suzanne Birt (Charlottetown) 7-4 in the afternoon. The other winners on the draw were Northern Ontario, Manitoba and Ontario. Despite her outstanding play, Strong said there is still room for improvement. “It’s nice to squeak out wins when you still aren’t quite on all cylinders. We have to be pleased, we won two games today. Hopefully we will keep that momentum going tomorrow,” Strong said. Strong was clearly understating her performance. On one end she made a draw against three and on another she made a double against three. “But when you are playing against three, you know things didn’t go quite right. We are happy to be 2-1 no question. We went to bed last night with no wins and will go to bed tonight with two wins. You can’t complain.” Finally, she admitted she was pleased with her play. “I had a solid day at the office.” Newfoundland & Labrador is now 2-1, while Prince Edward Island slipped to 1-1. Northern Ontario’s Tracy Horgan (Sudbury) won her first game of the round-robin draw with a 10-6 victory over Quebec’s Lauren Mann (Montreal). The win gave Horgan a 1-1 record, while Mann fell to 1-2. “I think we put a lot of pressure on them,” Horgan said. “It was an exciting game. There were always a ton of rocks in play it seemed like. We enjoyed the game out there.” Ontario’s Julie Hastings (Thornville) and Nova Scotia’s Mary-Anne Arsenault (Halifax) battled for more than three hours, before Hastings emerged with a dramatic 8-7 win in an extra end. Two up coming home, Hastings made an outstanding double against three to get her team to an 11th end. The extra end wasn’t easy for Hastings. “We had to put a little bit on the line in the extra end to make it exciting for the fans,” she said, minutes after making a clutch come-around tapback for the win. “We’re very excited that we got that win.” She was asked about the double on 10. “We just think back to the Hot Shots. Those shots prepare for those kinds of moments. So that was an exciting one in a do-or-die scenario.” Manitoba’s Jennifer Jones (Winnipeg) made short work of British Columbia’s Patti Knezevic (Prince George). Jones dispatched Knezevic by a score of 11-2 in eight ends. After Knezevic got one on the first end, Jones scored two, one, three, three and one. That gave Jones a 10-1 lead after six ends. Knezevic scored one on the seventh end to the delight of the crowd. After Jones scored one on eight, it was handshakes all around. 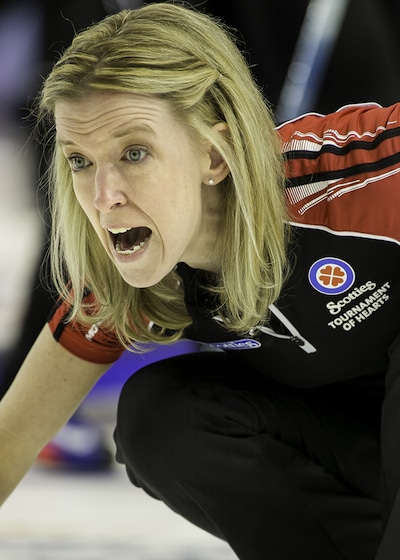 Jones took her 2-0 start in stride. “It’s nice to have a strong start, but I don’t think it is the be-all and end-all for sure. We’ve only had two games and we have a tough one tonight (against Saskatchewan). I’m happy with how we are playing.” The standings are looking like many had predicted at the start of play. Team Canada, Manitoba and Alberta are on top at 2-0. Newfoundland & Labrador is 2-1, Northern Ontario, Ontario, Prince Edward Island and Saskatchewan are 1-1. Quebec and Nova Scotia are 1-2, with New Brunswick 0-2 and British Columbia 0-3. There is another draw tonight at 7 p.m. For ticket and other event information, visit https://www.curling.ca/2015scotties-en/ For the complete schedule, go to https://www.curling.ca/2015scotties-en/draw-schedule/ TSN (RDS2 in French), the exclusive television network for the CCA’s Season of Champions, will provide complete coverage of the 2015 Scotties Tournament of Hearts. This story will be posted in French as soon as possible at https://www.curling.ca/2015scotties-fr/