Homan-Jones showdown looming at the Scotties 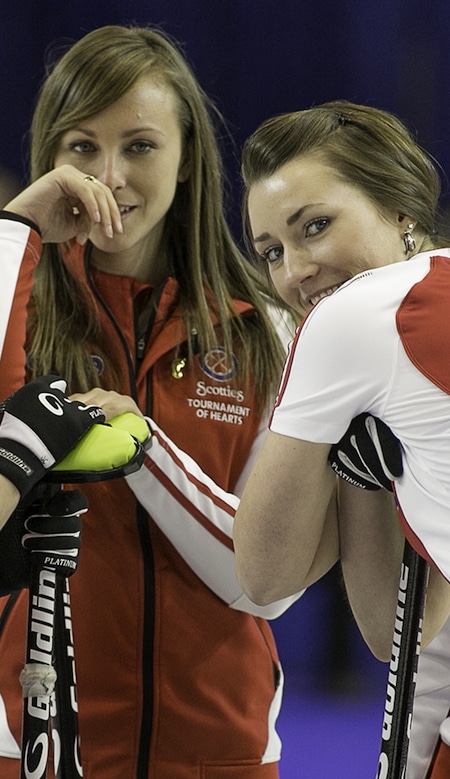 Rachel Homan and Emma Miskew were all smiles during their win on Monday afternoon. (Photo, CCA/Andrew Klaver)

In the other two games, Saskatchewan’s Stefanie Lawton (Saskatoon) defeated Quebec’s Lauren Mann (Montreal) 8-3 and Nova Scotia’s Mary-Anne Arsenault (Halifax) downed New Brunswick’s Sylvie Robichaud (Moncton) 5-4. Homan’s win was a tuneup for Monday night’s clash between her and Jones, a rematch of the 2013 Scotties final, won by Homan, in Kingston, Ont. More than 4,000 fans are expected to be at Mosaic Place for that one. With home-province favourite Lawton on the same draw, the rink should be rocking. “We really enjoy playing Jennifer Jones’ team,” said Joanne Courtney, the second for Team Canada. “They’re great people, so it’s always fun. There are lots of rocks in play, so you need to show up and be your best. “We’re playing in front of a crowd that is knowledgeable and fair, and they are cheering for great shots. It’s exciting when we have an opportunity to do that.” Sweeting was in control of her game with Strong from the beginning, but did have to make a draw to the four-foot while facing three on the sixth end. She was dead on, giving her a 5-2 lead that proved too much for Strong to overcome. “We feel comfortable out there, with how we are throwing and settling in to the ice,” Sweeting said. “We are happy with our record, but we definitely have a lot of work to do still. We want to stay strong, keep learning and keep making shots out there.” Strong won two games on Sunday, then lost two on Monday, first to Homan and then to Sweeting. That’s a tough day at any office. Lawton got out in front of Mann early, building a 5-0 lead after five ends. She cruised the rest of the way to even her record at 2-2. “We’re on a streak now – one game,” Saskatchewan third Sherry Anderson said with a laugh. “We played OK in the (two losses) except for a couple of ends. Against the top teams you can’t play for eight ends when you are playing a 10-end game. 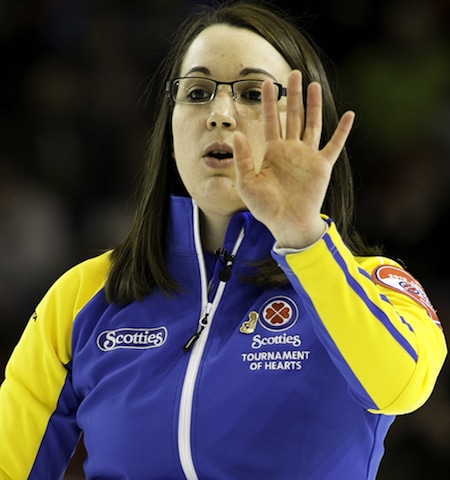 “We’ve played pretty solid actually. It’s not that we are playing badly. We’re just not on the right side of the scoreboard.” Arsenault ended a three-game losing streak with her win over Robichaud. Tied up coming home, Arsenault got the point she needed to send New Brunswick to its fourth straight loss. Manitoba, Team Canada and Alberta lead the pack with 4-0 records. Northern Ontario, Prince Edward Island, Saskatchewan and Ontario are 2-2. Newfoundland/Labrador and Nova Scotia are 2-3. British Columbia and Quebec are 1-4, while New Brunswick is 0-4. There are draws at 2 p.m. and 7 p.m. Tuesday. For ticket and other event information, visit https://www.curling.ca/2015scotties-en/ For the complete schedule, go to https://www.curling.ca/2015scotties-en/draw-schedule/ TSN (RDS2 in French), the exclusive television network for the CCA’s Season of Champions, will provide complete coverage of the 2015 Scotties Tournament of Hearts.