Three-way race early at the 2015 Scotties

The top of the standings is looking a lot like many predicted prior to the 2015 Scotties Tournament of Hearts. Team Canada’s Rachel Homan (Ottawa), Manitoba’s Jennifer Jones (Winnipeg) and Alberta’s Val Sweeting (Edmonton) are all at 3-0, with no signs of slowing down. 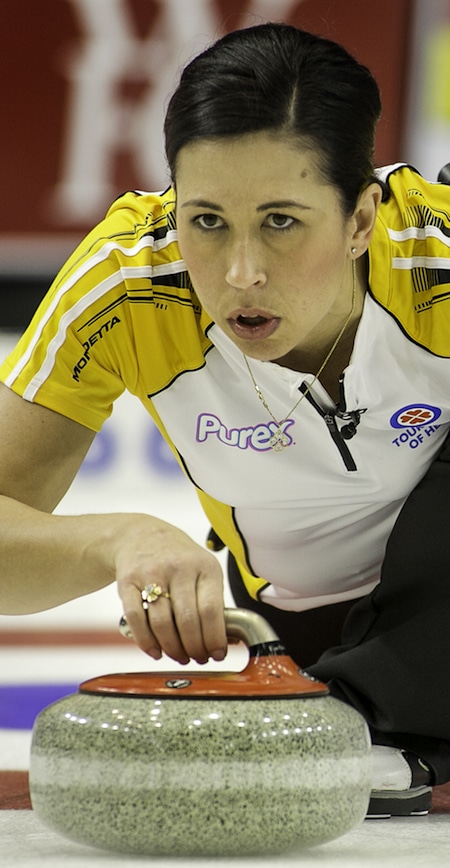 There were some great games on Sunday, including Homan’s 10-7 win over Ontario’s Julie Hastings (Thornhill) on the late draw. Sweeting’s 6-5 win over Nova Scotia’s Mary-Anne Arsenault (Halifax) in the morning had a dandy finish. Another good one was Jones’s 6-4 win over Saskatchewan’s Stefanie Lawton (Saskatoon) in front of a boisterous crowd at Mosaic Place. Hastings gave Homan a tussle. The teams were tied at seven after eight ends. Hastings forced Homan to one on the ninth end to trail 8-7 coming home. Homan stole two on the 10th when Hastings barely missed a long raise. Homan’s shot of the night was a cross-house double to count three in the third when she was trailing 2-0. “It’s always fun definitely to make a lot of rocks move, but it’s nice to draw for four, too,” she said with a laugh. “They’re both fun.” Hastings’ two losses have been nail-biters to Homan and Jones. “It was a really great game,” Homan said. “They played really well, and it came down to last rock.” Homan has now won 21 straight games, dating back long before the Scotties. She said the 3-0 at the Scotties is more important to her. “I don’t really think about that; just take it as every tournament as it comes. We have to take it game by game. The losses are going to come; it’s inevitable in sport. You just have to make sure you win your next one.” Jones got out in front of Lawton with a deuce on the first end and a steal of one on the second. By the time the seventh end rolled around, Lawton had a draw to the four-foot to tie the game. It rubbed a rock at the top of the house and didn’t spin into the four-foot. Jones got two in eight and Lawton couldn’t quite catch her. Jones really enjoyed the atmosphere at Mosaic Place. “It’s so fun to play in any electric building,” Jones said. “At the Olympics, it was loud no matter what and it was just fun to be a part of. The louder the better. Even if they are not cheering for us, just the louder the better. It’s really what sports is all about. “We hope Stef and her team make the playoffs and are right there to give the crowd something to cheer for.” Lawton dropped to 1-2, with her other loss being to Homan. “Definitely it was a tough couple of days here, but we’re getting stronger and stronger out there. Today’s was a better game than yesterday night’s, so we are going to keep building on that.” Lawton said she loves playing in front of the home crowd. “Moose Jaw is just phenomenal. We love it, so we’re going to give them something to cheer about in these next few days.”

Team Canada’s Rachel Homan had to work hard to eke out a Sunday night win over Ontario. (Photo, CCA/Andrew Klaver)

Following Homan, Jones and Sweeting in the standings are Newfoundland & Labrador’s Heather Strong (St. John’s) and Prince Edward Island’s Suzanne Birt (Charlottetown) at 2-1. Northern Ontario’s Tracy Horgan (Sudbury), Ontario, Saskatchewan, Quebec’s Lauren Mann (Montreal) and Nova Scotia are 1-2, while New Brunswick’s Sylvie Robichaud (Moncton) and British Columbia’s Patti Knezevic (Prince George) are 0-3. Sweeting was tested on Sunday morning. Up 6-4 coming home against Arsenault, Sweeting had to draw against four with her last rock. She hit the four-foot to cut Nova Scotia to a single point. Many thought Sweeting would be in a good position in the standings when she got to the tough part of her schedule – games against Homan, Lawton and Jones to close the round robin. “No, I don’t think you can look ahead,” Sweeting said after defeating Arsenault.” Each game is important and each team is really good. You have to take every game one at a time. If you get lost in it, you may fall behind. We just want to be strong in every game and do our best.” Sweeting ended her day with a 10-4 win over New Brunswick’s Sylvie Robichaud (Moncton). Strong won a pair of games Sunday to go to 2-1. Birt split her two. After stealing two on the 10th end to defeat New Brunswick 5-4 on the morning draw, Strong downed Birt 7-4 in the afternoon. “It’s nice to squeak out wins when you still aren’t quite on all cylinders. We have to be pleased, we won two games today. We went to bed last night with no wins and will go to bed tonight with two wins. You can’t complain.” There are draws at 9 a.m., 2 p.m. and 7 p.m. today. The late draw features a matchup between Homan and Jones. For ticket and other event information, visit https://www.curling.ca/2015scotties-en/ For the complete schedule, go to https://www.curling.ca/2015scotties-en/draw-schedule/ TSN (RDS2 in French), the exclusive television network for the CCA’s Season of Champions, will provide complete coverage of the 2015 Scotties Tournament of Hearts. This story will be posted in French as soon as possible at https://www.curling.ca/2015scotties-fr/