Manitoba’s Jennifer Jones (Winnipeg) and Team Canada’s Rachel Homan (Ottawa) pounded away at each other for three-and-a-half hours on Monday night. There were bragging rights involved as well as a share of top spot at 5-0 with Alberta’s Val Sweeting (Edmonton) at the Scotties Tournament of Hearts. While many teams play a feel-you-out first end, Jones and Homan came out throwing punches. It’s what the large, boisterous crowd at Mosaic Place came to see. Jones got the jump with three on the second end. Homan finally caught her with a deuce on five. That made it 4-4 at the break. Away they went again on the sixth end, playing skins game-like curling. Jones made a touchy double for two to regain control of the scoreboard. It looked like it wouldn’t be for long. Homan was hitting for three with her first rock on seven. A rollout and a double by Jones took it all away, forcing Team Canada to blank the end. Homan scored two on eight to tie the score at 6-6. The ninth end was a rock festival. Rather than taking a pretty sure two, Jones went for three and got one. With her first rock on the 10th end, Jones may have saved the game with a difficult raise double. With her second shot, she chipped a Homan stone off the button. Homan drew the button to send the game to an extra end. When Jones went to throw her last rock on the extra end, she was facing a guarded Homan rock, biting the top four-foot. Jones put final rock on the button to win 8-7 and match Sweeting win for win. Jones was happy with the game. “It’s great to win games like that and having to make draws to win big games is good,” Jones said. She didn’t attach any particular significance to it. “It was another round-robin game and obviously they are doing well, so you want to knock some people back. … It’s just one more win and we have a lot more winning to do.” Homan said she was happy with the way her team played. “It was a really good game,” Homan said. “I’m really proud of my team. They made a ton of shots and so did the other team. It was a great game to play. The crowd was really awesome. Jones played really well.” The crowd went home happy, anticipating another game or two between the two teams at the end of the week. Sweeting had a tussle on her hands against Prince Edward Island’s Suzanne Birt (Charlottetown), before winning 6-5. Down two playing nine, Birt scored two to tie the game coming home. Sweeting needed a quiet takeout with her last rock for the win. Saskatchewan’s Stefanie Lawton (Saskatoon) and Ontario’s Julie Hastings (Thornhill) battled hard as well. The winner was going to move into a tie for fourth with Northern Ontario’s Tracy Horgan (Sudbury), while the loser would drop into a traffic jam at 2-3. Through eight ends, the team with the hammer either blanked the end or scored a single. You don’t see that every day with the four-rock rule in play. The teams were tied 3-3 after nine, with Lawton the holder of the hammer on 10. Lawton made a nice draw to the four-foot with a little bit of backing to win 4-3 and move to 3-2. “We managed the game well,” Lawton said. She said it was fun playing with the crowd behind her. “We want to give them something to cheer about and we definitely did that today with some great draws and great hits. It was a lot of fun out there and we certainly love the crowd.” 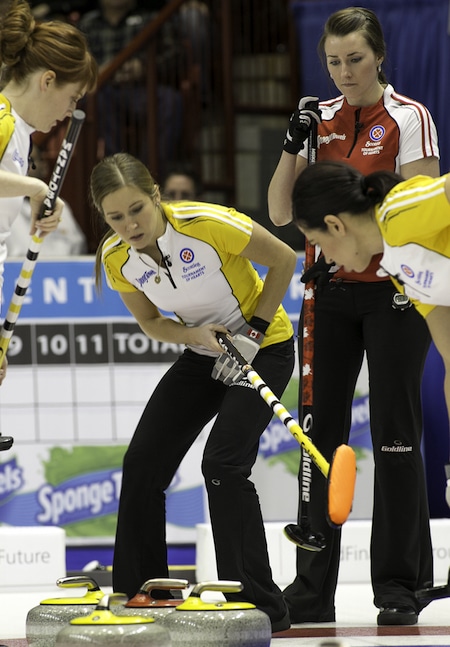 Hastings said she is happy with where her team is sitting. “Absolutely,” she said. “We’re happy that we are playing well. We’re in our games and have a chance to come out on top.” Horgan scored an easy 8-4 victory over Prince Edward Island’s Sylvie Robichaud (Moncton) to get to 3-2. “We’re pretty pleased with that,” Horgan said. “Today was a really good day. We played well.” Earlier Monday, Horgan defeated Nova Scotia’s Mary-Anne Arsenault (Halifax) 8-4. At 2-3 are Ontario, Prince Edward Island, Newfoundland/Labrador’s Heather Strong (St. John’s) and Nova Scotia’s Mary-Anne Arsenault. British Columbia’s Patti Knezevic (Prince George) and Quebec’s Lauren Mann (Montreal) are 1-4, while New Brunswick is 0-5. There are draws at 2 p.m. and 7 p.m. Tuesday. For ticket and other event information, visit https://www.curling.ca/2015scotties-en/ For the complete schedule, go to https://www.curling.ca/2015scotties-en/draw-schedule/ TSN (RDS2 in French), the exclusive television network for the CCA’s Season of Champions, will provide complete coverage of the 2015 Scotties Tournament of Hearts.