Saskatchewan in the hunt with third straight victory

It can’t be said Saskatchewan has quietly moved into fourth place at the 2015 Scotties Tournament of Hearts. Not here. Not with the crowd at Mosaic Place erupting for every good shot and exploding for the great ones. 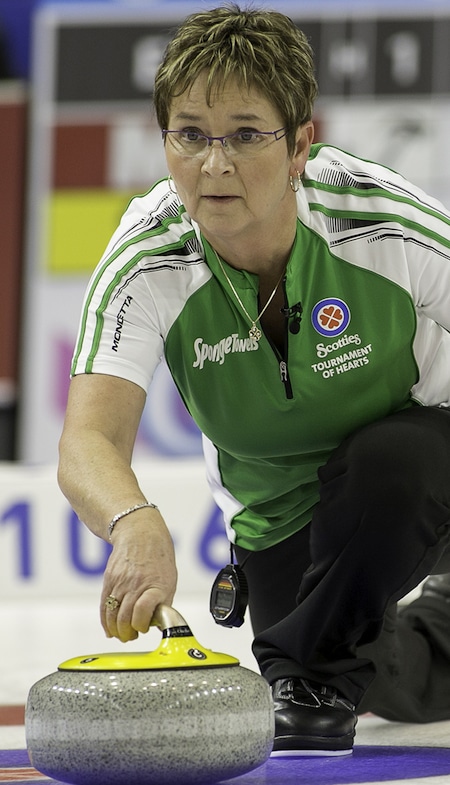 Saskatchewan vice-skip Sherry Anderson and her teammates are in the playoff hunt at the 2015 Scotties. (Photo, CCA/Andrew Klaver)

After a 1-2 start, Stefanie Lawton is now 4-2 and looking good. She ran her win streak to three with a 6-5 win over Nova Scotia’s Mary-Anne Arsenault (Halifax) on Tuesday’s late draw. With two of her first three games coming against Team Canada’s Rachel Homan and Manitoba’s Jennifer Jones (Winnipeg), Lawton has been nudging past teams most likely to pressure her for fourth place. That is assuming the top three spots go to Alberta’s Val Sweeting (Edmonton), Jones and Homan. We all know about assuming. Lawton and Arsenault played it fairly tight, with not a lot of rocks in play on many ends. With a steal on the ninth end, Arsenault took a 5-4 lead coming home. On 10, Saskatchewan third Sherry Anderson socked one behind a double guard. The question was could Lawton get two. Arsenault’s last rock slipped a little deeper than she wanted, leaving Lawton a hit for the win. As Lawton’s rock connected with Arsenault’s, the crowd erupted. There was that noise again. Lawton was asked if she preferred to be one down with hammer or one up without on 10th ends. “Today, one down with,” she said with a laugh. “It changes from day to day.” Lawton is happy to be a win up on the pack, and just one behind Homan. “I think we are sitting pretty good, considering how we started the tournament. I feel really good with where we are at. We’re going to keep on truckin’ because we have the second half to go.” Sweeting ran her record to 6-0, with a 10-5 win over British Columbia’s Patti Knezevic (Prince George). Jones also has six wins. Homan notched her fifth win against one loss, with an 11-5 victory over Newfoundland/Labrador’s Heather Strong (St. John’s). Sweeting is cruising. She knows the toughest part of her draw is still to come, but isn’t looking ahead. “I think it is there, but you can’t focus on it at all,” Sweeting said of upcoming games with Homan, Jones and Lawton. “You really have to watch the game ahead of you because no matter what the team’s record is going in, you have to win that one. They can shoot lights out against you no problem. No, you can’t stay ahead. You have to stay in the moment.” Homan, who lost an 8-7, extra-end thriller to Jones on Monday night was pleased to get back on the winning track. Strong kept it close until the seventh end, when Homan struck for six to take an 11-3 lead. 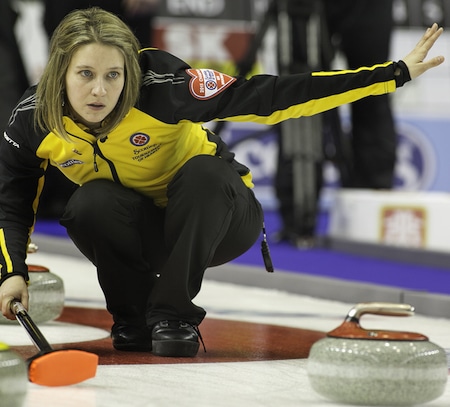 “Every win is important,” Homan said. “You don’t want to get behind in a long week like this. We are looking to get to that Page 1-2 game. If we only have one loss at the end of the week, I think we will be in it.” On the early draw Tuesday, Jones showed no signs of a letdown after the battle with Homan the night before. She beat Quebec’s Lauren Mann (Montreal) 9-4. “We just love to curl, so it wasn’t hard to get up for the game,” Jones said. “We were a little shaky at the start, but I thought we ended the game well. We will take that forward and into tomorrow.” Jones said her team is having fun. “It’s a great atmosphere out there and a great crowd. It’s always fun to be at the Scotties. Our family is here, we love to curl. Really, life can’t get any better.” In the other game Tuesday night, New Brunswick’s Sylvie Robichaud (Moncton) earned her first win of the tournament, defeating Quebec’s Lauren Mann (Montreal) 9-8 on an extra end. Draws Wednesday will be held at 9 a.m., 2 p.m. and 7 p.m. For ticket and other event information, visit https://www.curling.ca/2015scotties-en/ For the complete schedule, go to https://www.curling.ca/2015scotties-en/draw-schedule/ TSN (RDS2 in French), the exclusive television network for the CCA’s Season of Champions, will provide complete coverage of the 2015 Scotties Tournament of Hearts.