Nova Scotia completes day of upsets at the Scotties

Nova Scotia’s Mary-Anne Arsenault came into play Wednesday at the Scotties Tournament of Hearts with a 2-5 record. She finished up at 4-5. But that’s not nearly the complete story. 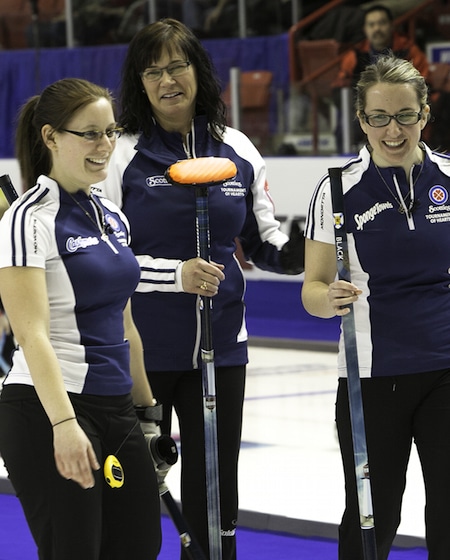 The veteran Nova Scotia skip toppled Manitoba’s Jennifer Jones (Winnipeg) from the ranks of the unbeaten on the morning draw with a 9-6 win, and then knocked off two-time defending Canadian champion Rachel Homan (Ottawa) 7-6 in the afternoon. Arsenault, who has lost four last-rock games at the championship, scored four on the sixth end to jump in front of Homan 6-2. Arsenault barely missed getting five. Homan got a deuce on seven to get within two. Arsenault got one on eight to take a 7-4 lead into the ninth. Homan decided to take one on the ninth end so she was two down coming home without the hammer compared with three down with last rock. Arsenault enjoyed the day, saying it was her turn to get some breaks. “I certainly didn’t expect this,” she said. “We’ve been playing well. It’s just that little hit and roll that we haven’t been able to call properly.” Arsenault said the first-year players on her team were happy they were getting to play Jones and Homan, let alone win. “It’s kind of amusing actually. As soon as we got our schedule, we saw that we were playing those two teams on the same day. Then we have our Up Close and Personal (session with fans) and (second) Jane (Snyder) said, ‘We’ll just go and talk about how we just beat the best two teams in the tournament. I guess she had a premonition.” Nova Scotia third Christina Black was ecstatic. “It is amazing to beat the two best teams in the world – the Olympic gold medallist and the reigning champion here. It’s unreal. I watched these guys on TV for the past years: Jennifer for probably the over 10 years has been on the top. And Rachel for the past five years. To play them and now win, you can really believe we deserve to be here, and have what it takes.” Arsenault got ahead of Jones early and never gave the lead back. Two on the fifth end put Arsenault up 5-2 at the break and had the crowd buzzing. After Jones counted one on six and stole one on seven, Arsenault got three in a sloppily played eighth end to go up four. Jones missed both of her shots on the end. First she rubbed on a short raise attempt. On her final stone, she hit one of her own rocks too thin, leaving Arsenault a tap for three and an 8-4 lead. Jones came back with two on nine to crawl to within two. Nova Scotia played a relatively clean 10th end, leaving Arsenault an open takeout on her final rock. “We weren’t at our best and they played very well today,” Jones said. “There were a couple of rocks we’d like back. At the end of the day it’s just one loss so we just have to bounce back tonight. 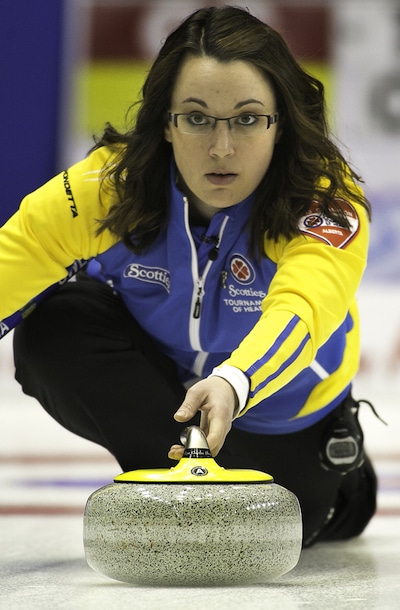 Alberta’s Val Sweeting has her team alone in first place with a 7-0 record. (Photo, CCA/Andrew Klaver)

Arsenault was said her team finally got some of the breaks that often decide curling games. “I am very happy with the way that one played out,” she said. “We played great and got some breaks. We haven’t gotten any breaks at all this week. They all came in one game.” Alberta’s Val Sweeting (Edmonton) leads the tournament at 7-0, after topping Quebec’s Lauren Mann (Montreal) 8-5. Saskatchewan’s Stefanie Lawton (Saskatoon) defeated Newfoundland’s Heather Strong (St. John’s) 4-2. Lawton stole points on the seventh and ninth ends for the margin of victory. In the other game, New Brunswick’s Sylvie Robichaud (Moncton) defeated British Columbia’s Patti Knezevic (Prince George) 8-7. Manitoba is second in the standing with a 6-1 record. Homan and Lawton are tied at 5-2, while Prince Edward Island’s Suzanne Birt (Charlottetown), Ontario’s Julie Hastings (Thornhill) and Northern Ontario’s Tracy Horgan (Sudbury) each have 4-3 records. Nova Scotia is now 4-5, with Newfoundland/Labrador 3-6. New Brunswick’s Sylvie Robichaud (Moncton) is 2-5, followed by British Columbia and Quebec at 1-8. The last draw of the day is at 7 p.m. For ticket and other event information, visit https://www.curling.ca/2015scotties-en/ For the complete schedule, go to https://www.curling.ca/2015scotties-en/draw-schedule/ TSN (RDS2 in French), the exclusive television network for the CCA’s Season of Champions, will provide complete coverage of the 2015 Scotties Tournament of Hearts.