The Nova Scotians have been inconsistent this week, but brought their A-plus game to the ice against Jones. Two on the fifth end put Arsenault up 5-2 at the break and had the crowd buzzing. After Jones counted one on six and stole one on seven, Arsenault got three in a sloppily played eighth end to go up four. Jones missed both of her shots on the end. First she rubbed on a short raise attempt. On her final stone, she hit one of her own rocks too thin, to leave Arsenault a tap for three and an 8-4 lead. Jones came back with two on nine to crawl to within two. Nova Scotia played a relatively clean 10th end, leaving Arsenault an open takeout on her final rock. “We weren’t at our best and they played very well today,” Jones said. “There were a couple of rocks we’d like back. At the end of the day it’s just one loss so we just have to bounce back tonight. Arsenault was said her team finally got some of the breaks that often decide curling games. “I am very happy with the way that one played out,” she said. “We played great and got some breaks. We haven’t gotten any breaks at all this week. They all came in one game.” Arsenault is now 3-5. While the focus was over on Sheet A where Jones and Arsenault were playing, a logjam was being created in the standings. Four teams – Saskatchewan’s Stefanie Lawton, Prince Edward Island’s Suzanne Birt (Charlottetown), Ontario’s Julie Hastings (Thornhill) and Northern Ontario’s Tracy Horgan (Sudbury) – have four wins. Lawton is a half-game ahead with only two losses. The other teams with four wins have three losses. Birt defeated Quebec’s Lauren Mann (Montreal) 10-6 in her game. Hastings defeated Newfoundland/Labrador’s Heather Strong (St. John’s) 7-4 and Horgan downed British Columbia’s Patti Knezevic (Prince George) 7-5. Birt is happy to be in the hunt. “It’s a winning record,” she said. “Now we can just move on and up from here. We had our rocks in good positions and put a lot of pressure on them. We were able to get a miss or two out of her, so we were able to get a cap on a few extra points.” Hastings’ team continues to roll after losing battles early in the competition to Team Canada and Jones. “Another one under the belt. That felt like a good game for us,” Hastings said. 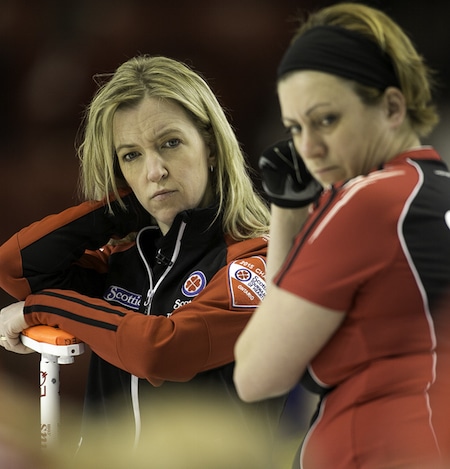 It was pointed out that she is now one of four teams with four wins. “Good, good. We’re one above the .500 mark now, so that’s good for us. We’re happy with that.” Horgan struggled early, before grabbing control of her game against B.C. “We came out a little bit flat, but found our groove by the second half,” Horgan said. Alberta’s Val Sweeting (Edmonton) leads the Scotties at 6-0. Next up is Manitoba at 6-1, and then Team Canada’s Rachel Homan (Ottawa) at 5-1. Then there is the group of four, each with four wins. Saskatchewan is at the head of that class with only two losses. Nova Scotia is now 3-5, as is Newfoundland/Labrador. New Brunswick’s Sylvie Robichaud (Moncton) 1-5, followed by British Columbia and Quebec at 1-7. There are two more draws today – at 2 p.m. and 7 p.m. For ticket and other event information, visit https://www.curling.ca/2015scotties-en/ For the complete schedule, go to https://www.curling.ca/2015scotties-en/draw-schedule/ TSN (RDS2 in French), the exclusive television network for the CCA’s Season of Champions, will provide complete coverage of the 2015 Scotties Tournament of Hearts.