Alberta’s Val Sweeting continues to be on target at the 2015 Scotties. (Photo, CCA/Andrew Klaver)

Awaiting the Alberta foursome from Edmonton on Thursday are Team Canada’s Rachel Homan and Saskatchewan’s Stefanie Lawton (Saskatoon). Friday, Sweeting finishes the round-robin against Manitoba’s Jennifer Jones (Winnipeg), having already clinched at least a tiebreaker berth. Sweeting defeated Ontario’s Julie Hastings (Thornhill) 8-5 on the Wednesday evening draw. “A big three games left for us,” she said. “We’re going to have to be strong, but still take it one game at a time. We’re in a good position. It is within our control. We’ve got to keep doing what we are doing and stay in the moment.” She said she was glad she didn’t have to play Nova Scotia’s Mary-Anne Arsenault, who knocked off both Jones and Homan earlier Wednesday. “We’re kind of happy not to play her today,” Sweeting said with a laugh. “They played really well against us, too. It was a really close game. We had control and almost gave it away, too.” Also on the evening draw, Homan defeated Prince Edward Island’s Suzanne Birt (Charlottetown) 9-5, Jones topped New Brunswick’s Sylvie Robichaud 9-7 and Northern Ontario’s Tracy Horgan (Sudbury) caught Saskatchewan’s Stefanie Lawton in the standings after beating the Saskatoon team 6-5. Both are at 5-3. Manitoba is 7-1 and Homan is 6-2. Horgan and Lawton have a one-game separation on Ontario, Prince Edward Island and Nova Scotia. Nova Scotia has played one more game. It was a tough loss for Lawton and a good one for Horgan. Saskatchewan went into the game with a one-game lead on the Northern Ontario rep. “We knew that would be a big game,” Horgan said. “I think it was a must-win to make the playoffs.” While Arsenault has “been there, done that,” on the national stage, the wins against Jones and Homan were huge for the two rookies on her team – third Christina Black and second Jane Snyder. Lead Jennifer Baxter has been with Arsenault for five years. Arsenault played on the Colleen Jones teams that dominated curling for a long spell. She is used to banging brushes with the best. “I certainly didn’t expect this,” she said of the sweep. “We’ve been playing well. It’s just that little hit and roll that we haven’t been able to call properly. 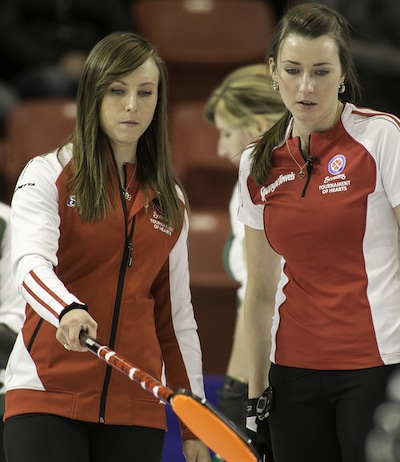 “We played great and got some breaks. We haven’t gotten any breaks at all this week. They all came in one game,” she said after beating Jones. Arsenault said Black and Snyder were excited they were getting to play Jones and Homan, let alone win. “It’s kind of amusing actually. As soon as we got our schedule, we saw that we were playing those two teams on the same day. Then we have our Up Close and Personal (session with fans) and (second) Jane (Snyder) said, ‘We’ll just go and talk about how we just beat the best two teams in the tournament. I guess she had a premonition.” Black was ecstatic. “It is amazing to beat the two best teams in the world – the Olympic gold medallist and the reigning champion here. It’s unreal. I watched these guys on TV for the past years: Jennifer for probably the over 10 years has been on the top. And Rachel for the past five years. To play them and now win, you can really believe we deserve to be here, and have what it takes.” There are draws at 9 a.m., 2 p.m. and 9 p.m. Thursday. For ticket and other event information, visit https://www.curling.ca/2015scotties-en/ For the complete schedule, go to https://www.curling.ca/2015scotties-en/draw-schedule/ TSN (RDS2 in French), the exclusive television network for the CCA’s Season of Champions, will provide complete coverage of the 2015 Scotties Tournament of Hearts.