Saskatchewan’s Stefanie Lawton is having so much fun at the Scotties Tournament of Hearts that she doesn’t want it to end. Ever. The way her team played Thursday, it might not end anytime soon. 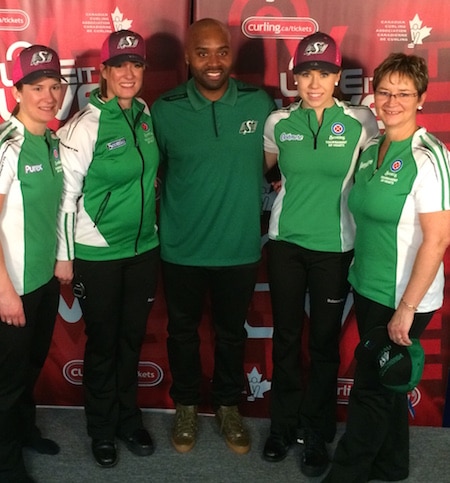 After dismantling Alberta’s Val Sweeting 9-1 Thursday night, and with two-time defending Canadian champion Rachel Homan losing a shocker to New Brunswick’s Sylvie Robichaud on the next sheet, Lawton is guaranteed a playoff spot. Homan will be playing to stay in the competition Friday morning in a winner-take-all game against Northern Ontario’s Tracy Horgan, with the winner play Saskatchewan in the Page playoff 3-4 game Saturday at 10 a.m. The Saskatchewan team made it look easy Thursday, much to the delight of a large crowd at Mosaic Place. It was Sweeting’s first loss of the competition after nine consecutive wins, including a thriller against Homan on the afternoon draw. Sweeting counted two on the 10th end for a 7-6 victory. With the win over Homan, Sweeting qualified for a spot in the Page 1-2 game. Sweeting will play Manitoba’s Jennifer Jones twice on Friday. They will first meet in the final game of the round-robin. The more important battle will be the one Friday night at 7 p.m. The winner of the Page 1-2 game advances to Sunday’s final, while the loser will play in the semifinal Saturday at 3 p.m. The Page 3-4 game will be played at 10 a.m. on Saturday, with the winner going to the semi and the loser playing for bronze on Sunday. Sweeting said she didn’t let up against Saskatchewan, but was outplayed. The game ended on the eighth end with Sweeting sliding the length of the ice and putting her rock on the button. It delighted the boisterous crowd. The win moved Saskatchewan to 7-3 in the standings, with a game against Prince Edward Island left in the round-robin. Lawton scored two on the first end and stole one on the second after two outstanding draws that left Sweeting without a way to count. After Sweeting got one on the third, Lawton struck for another two on the fourth and a steal on the fifth to go up 6-1 at the break. The game essentially ended when Lawton stole two on the sixth end to go up 8-1. “We didn’t feel that off in the first half of that game,” Sweeting said. “We weren’t getting what we needed to out of our shots. They were shooting amazing. We really didn’t have a lot to work with. We tried to keep having fun out there. We have to shake that one off.” It was Saskatchewan’s best game of the tournament. “We have had some good games throughout the competition, but nothing at this level,” Lawton said. 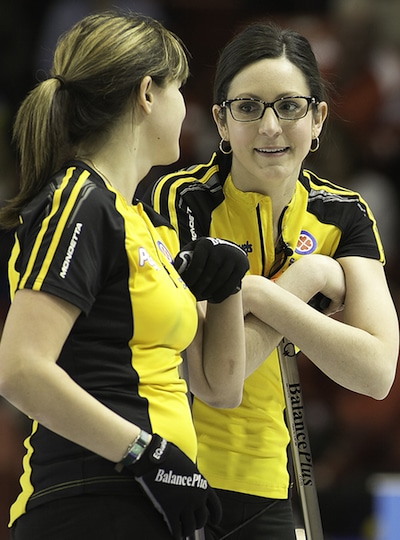 She said the crowd continues to make a difference for her team. “They have been so supportive all week. We have been struggling a little bit throughout the week. They’re still there cheering us on for guards, whatever it is. We love it and love playing in front of the Moose Jaw crowd, our family and friends. “This week has gone by so fast. It’s one of those things that we want to just keep playing. It’s so much fun out there.” The crowd included quarterback Kevin Glenn, who signed with the Saskatchewan Roughriders on Thursday. After the game, he met and took photos with the Saskatchewan team. Team Canada is now tied at 6-4 with Northern Ontario. Counting one, Robichaud made a tricky draw to the four-foot to get her deuce and a roar from the crowd. “I felt like I was Saskatchewan,” she said of the loud ovation. “You know how you watch it on TV and people clap. They did that for me and I was like, ‘This is kind of fun.’” She said her strategy was to keep the game simple. “We know they like the big shots, the angles so we tried to keep it simple, keep it to our level, and it worked out.” The final round-robin draw will be played Friday morning at 9 p.m. The Page 1-2 game will go at 7 p.m. For ticket and other event information, visit https://www.curling.ca/2015scotties-en/ For the complete schedule, go to https://www.curling.ca/2015scotties-en/draw-schedule/ TSN (RDS2 in French), the exclusive television network for the CCA’s Season of Champions, will provide complete coverage of the 2015 Scotties Tournament of Hearts.