Alberta gets its shot at gold with Scotties semifinal win

Alberta’s Val Sweeting ended a three-game losing streak and Saskatchewan’s magical run at the 2015 Scotties Tournament of Hearts with a 7-6 semifinal victory Saturday. 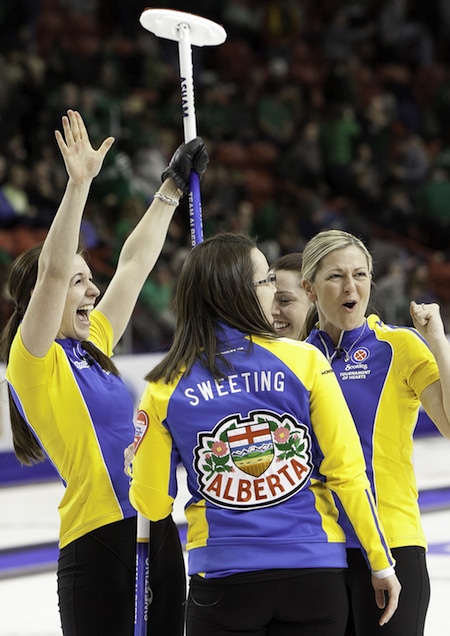 Sweeting’s losing streak had included her final two round-robin games, as well as the Page playoff 1-2 game Friday to Manitoba’s Jennifer Jones, undoubtedly taking away a chunk of the confidence she’d built up during a 9-0 start to the Canadian women’s curling championship. Sweeting got a good measure that back in the semifinal and is anxious to get another shot at Jones. Manitoba also defeated Alberta in the round-robin. “Third time’s a charm maybe,” Sweeting said with a laugh. “It will be a close game. We’ll just try not to spot them four (as happened in the first end of the 1-2 game). It should be better. “We have to limit the mistakes and if we happen to get an opportunity we have to take it, but we can’t wait for it. We have to be really strong like we were today and leave it all out on the ice.” The final will be played at 7 p.m. Central Sunday at Mosaic Place. Team Canada and Saskatchewan play in the bronze-medal game at 2 p.m. Alberta scored three on the fourth end and two on the sixth to get out in front 6-3. It was a lead Alberta wouldn’t relinquish, but there were some trying moments. Take the 10th end, for example. Facing two with her last rock, Sweeting had to come around a short guard and freeze to a Lawton stone in the four-foot. The stone stopped just in front of Lawton’s rock for second shot, but took Saskatchewan’s other rock out of play. Lawton came up short on a draw to the four-foot that would have forced an extra end. Lawton said the rock felt good coming out of her hand. “It was just a hair stickier there and the girls just couldn’t drag it there. It was unfortunate it came up a little short.” Sweeting said she tried not to focus on the three previous games. “We had played really good teams and lost, so we knew we had to play better.” Despite losing two of their first three games, the Saskatchewan team rolled to an 8-3 record in the round-robin. Earlier Saturday, they knocked two-time defending Canadian champion Rachel Homan to the bronze-medal game with a raise-the-roof 8-7 extra-end win. Saskatchewan would like to have the fourth end back. Lawton missed a hit and jammed an attempt at a double. 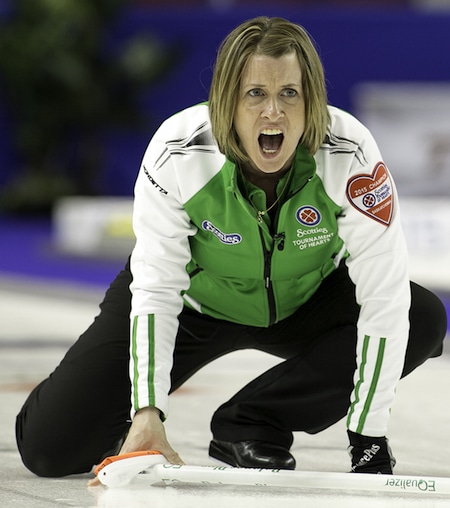 “I had one bad end there,” Lawton said. “The girls played great and I am so proud of them. I just wish I could get that end back and a couple shots back. It doesn’t work that way and that’s why we play the game of curling I guess.” Sweeting was happy with the three, but didn’t expect it. “It is definitely better when it is on your side of the scoreboard than the other,” Sweeting said. “We knew we had to stay strong after that three. We got a lucky break. That’s pretty uncharacteristic of Stefanie. We knew we had to stay tough. They made good shots to set up their deuces after that.” Alberta scored two more on the sixth end that was played in the four-foot. Sweeting would eventually have a quiet tapback for the two. There was no quit in the Saskatchewan team, or its boisterous fans. Lawton got two on the seventh end to crawl back to within one and get the fans singing and hollering again. Unfortunately for those wearing green in the packed house, Saskatchewan was unable to get anything going on the eighth end, giving Alberta an easy blank. Sweeting counted one on the ninth end to set up the dramatic finish. Lawson said the week has been awesome. “It’s been an incredible journey. The crowds been fantastic and to play in our home province, there is nothing better than that. It was so much fun and we really enjoyed ourselves this week.” Sweeting is backed by third Lori Olson-Johns, second Dana Ferguson, lead Rachelle Brown, alternate Sarah Wilkes and coach Garry Coderre. Lawton’s team is made up of third Sherry Anderson, second Stephanie Schmidt, lead Marliese Kasner, alternate Lana Vey and coach Rick Folk. The winner of the 2015 Scotties will represent Canada at the Zen-Noh World Women’s Curling Championship, presented by Ford of Canada, March 14 to March 22 in Sapporo, Japan, in addition to qualifying for the 2015 Home Hardware Canada Cup in Grande Prairie, Alta., and the 2016 Financial Group Continental Cup in Las Vegas and the 2016 Scotties Tournament of Hearts in Grande Prairie. For ticket and other event information, visit https://www.curling.ca/2015scotties-en/ For the complete schedule, go to https://www.curling.ca/2015scotties-en/draw-schedule/ TSN (RDS2 in French), the exclusive television network for the CCA’s Season of Champions, will provide complete coverage of the 2015 Scotties Tournament of Hearts.